Stage 1 visit Barcelona in the Autumn term. It is always fraught with difficulties trying to organise a venture such as this so early in the year, but the gains far out-weight the pain. The Architectural experiential benefits at the broadest level of such a visit are without question, but perhaps in parallel with this is the social interaction and bonding it promotes amongst a new cohort of students, the majority of which are experiencing for the first time ‘education away from home’. 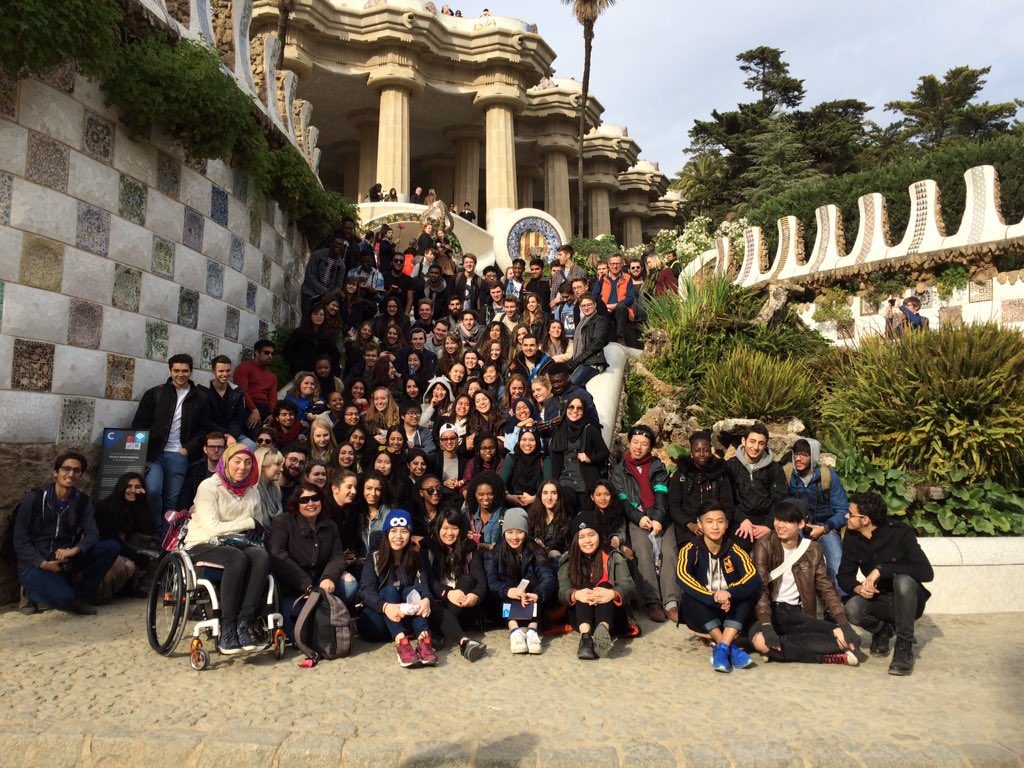 In December of 2013, many Stage 1 students departed for Barcelona, Spain at some ungodly hour of the morning, an effort however, which was regretted by none. Awaiting us was a week of intense picture taking, gallery viewing, site measuring and not to mention evening socialising. The objective of the trip was not only to record the site for the following term’s Building Design module but also to enjoy some of the main sites of one of Europe’s most animated cities all the while allowing students to build a strong group dynamic.

Throughout the course of the week we were able to visit some of Barcelona’s iconic features such as Park Guell, which we were lucky enough to be sketching under some southern December sun. We were also able to experience the masterpiece that is the Sagrada Familia, without forgetting, and continuing with the Gaudi theme, the Casa Milo and the Casa Batilo. All perfect examples of Gaudi’s great impact on the city. Other memorable sites were of course the Ramblas, the city’s center of attraction which leads down through Barceloneta, to the beautiful Port Olympic, home to Frank O. Gehry’s Fish.

Along with Barcelona comes not only architecture but also art, and the many impressive Galleries and Museums housing the works of so many, vastly diverse artists. In the midst of our treacherous hikes through the city we made many pit-stops at some of these buildings such as the Fundacio Joan Miro, the Museau d’Art Contemporani (MACBA), the Centre de Cultura Contemporania (CCCB) and many more, where we were able to admire what seems like only a small portion of the artistic wealth of the city as well as modestly attempt to capture these pieces in our own sketchbooks.

All educational trips do however include work. On this trip we had the task of choosing our six preferred pieces amongst the immense variety of art viewed during the week. Along side this we were also asked to take six photographs capturing everything we felt about six different places throughout the city, following the style of Roloff Beny. Most importantly however, the recording of the site for our Building Design module allowed us to experience hands-on everything that the analysis of a site entails, from the dimensions of lampposts to the environment the site is in, the current social occupation of the space and it’s current functionality throughout time.

Students took full advantage of evenings in the many charming restaurants and upbeat pubs and clubs in and around the city center, being reasonable as ever of course. The profound uniqueness of the city can be sensed everywhere, from the pixelated fruit on top of a market to a bull ring transformed into a shopping center or even a hospital laid out to represent the human body. There is definitely no way to capture how wonderfully charming Barcelona is in words, it’s a must-see, and I think I speak for everyone in saying that we had an absolute blast and that this trip was definitely an unforgettable experience.