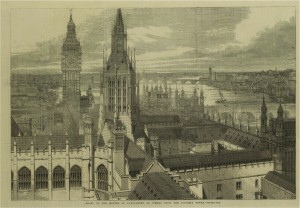 Up until the  1940s the Palace of Westminster was ventilated using a stack ventilation system  that originated in the mid-nineteenth century and was technically refined over  a period of ninety years, involving several design modifications. It was a  nineteenth century example of a mixed mode system, integrating natural and  mechanical strategies. Hot air was drawn out of the building using buoyancy  driven stack ventilation system, which exploited the waste heat from bodies,  smoke (from fire places, boilers and kitchens), gas lighting and the heating.  The air flow was assisted by steam jets or coke fires, and after 1904, by means  of electric fans. The historic stack system is no longer operational but  extensive archival evidence has survived and allows reconstructing the original  system in great detail as well as analysing its performance. This project is  based on extensive archival research conducted at the Smithsonian Institute,  British Library, Parliamentary, National, London Metropolitan Archives and the  libraries at UCL and the University of Cambridge. This material has not  been studied by historians in any depth before, and this project has shown  how primary source material can be used to reconstruct the design and  performance of the historic system in great detail. In addition, modern  technology and our current scientific understanding also enables  to  re-vitalize and improve the historic system. This possibility is investigated  as part current inquiries into sustainable environmental design strategies for  the refurbishment of the Palace. The primary research objectives of this  project are to regain a critical understanding of the original system, how it  was operated and performed under different conditions, using a combination of  archival research and technical analysis. Since the start of this project in  September 2011 the focus has been on historical research, involving extensive  archival research, which included the study of the original project  correspondence, drawings, sketches, measured data and scientific reports. An  analysis based on historic data, both quantitative and qualitative, has  provided detailed insights the system’s actual performance from the  mid-nineteenth century through to the 1940s. Archival evidence also illuminated  some of the technical issues encountered and the measures taken by the  Victorians to improve its performance, including numerous technical modifications  and changes to the environmental monitoring and control procedures. The methods  used by the Victorians in the development and testing of the system are also  studied. The research project focuses on four main areas:

(1)     reconstruction of the design and management of the historic system

(3)     study of the post-occupancy history, which includes a detailed analysis of the  system’s performance as well as the various technical refinements made  throughout its lifetime

(4)     Design-led studies into potential strategies for re-vitalizing parts of the historic  system as part of a sustainable ventilation strategy for the Houses of  Parliament.

This project is co-ordinated by Dr.  Henrik Schoenefeldt and in 2013 was extended to include collaborations with the  Parliamentary Design Authority. 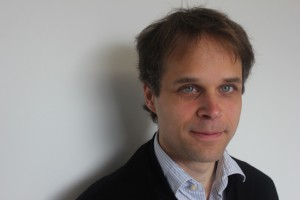 The current focus of this collaboration is on  ventilation of the House of Lords debating chamber, which includes a detailed  reconstruction and performance analysis of the historic system, based on  archival research, computer fluid dynamic simulations and surveys of the  existing chamber. This analysis is used to re-valuating the effectiveness of  the historic system relative to nineteenth century and modern benchmarks of  energy efficiency, thermal comfort and air quality. The findings of a  preliminary study has been outlined in a report entitled First Report on the  Victorian ventilation system of the House of Lords – Its design and evolution,  1839-54, which was submitted in January 2014. The report focuses on the  evolution of the original Victorian system in the House of Lords from the 1840s  till 1854, with a particular focus on the design introduced by Charles Barry’s  team in 1846 and its subsequent remodelling. This will be followed by  design-led research, interrogating various alternative scenarios for  revitalizing optimizing the performance of the historic system.