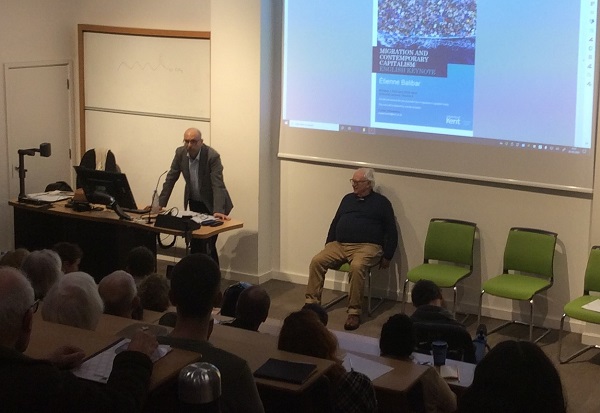 Last night the School of English was delighted to welcome Professor Étienne Balibar to hear his thoughts on global capitalism and migration, as the third speaker in our keynote lecture series.

Speaking to a full house, Professor Balibar offered an erudite explanation of how a renewed appreciation of Marx might help us engage with the current tragedy of migration policy in Europe. Pointing to our relative proximity to the migrant camps in Calais, he explained that economic migrants are not always as easily distinguishable from refugees as current legislation would suggest, and the implied notion of freedom of choice denies the violent realities many migrants face. The precarious mass of the global labouring population is riven by divisions, skilled/unskilled, south/north, female/male etc, which lead to rivalry rather than unified action, ultimately to the benefit of capitalist production. Workers attempting to move from one geopolitical entity to another frequently face opposition from both the State apparatus and the local labour force, whose potential class alignment with the incomers is often overshadowed by concerns regarding competition. Labour force competition generated by capital can lead precarious national workers to view homeless, precarious migrant workers as beneficiaries of ‘flexible borders’ – regardless of the dangers migrants face in crossing them.