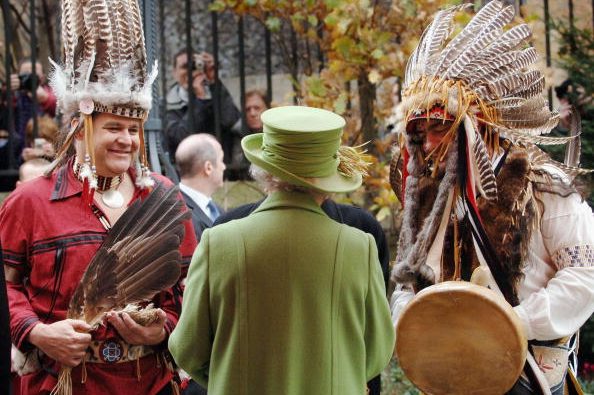 The researchers are also asking the public for help to uncover previously unknown historical objects and stories related to the subject that may be in their family.

Although focusing over a wide span of 450 years, the project will have a particular focus on the last 150 years to the present day, a period which has not previously been examined in any depth.

It will also look beyond the traditional focus on metropolitan centres such as London and instead examine how Native visitors travelled throughout Britain and established mutual relationships, economic exchanges, and cultural connections across the whole country.

To do this the project researchers intend to draw upon a diverse range of source material, much of it never previously examined, such as archival holdings, museum collections and oral histories.

They will also use a dynamic crowdsourcing campaign to uncover stories and material objects retained by private individuals or by descendant communities of those Native North Americans who travelled to Britain or who made their home there.

Anyone who thinks they may have information of interest is asked to visit the project website.

The project is funded by the Arts and Humanities Research Council (AHRC) to a value of £1m and will also include the involvement of academics from the University of East Anglia (UEA) and the University of British Columbia in Vancouver (UBC).

Professor David Stirrup in the School of English at Kent and Professor Jacqueline Fear-Segal in the School of Art, Media and American Studies at UEA will lead the research while Professor Coll Thrush at UBC will act as International Co-Investigator.

As well as traditional scholarly analysis the researchers intend to present the material they uncover in a variety of exciting and thought-provoking ways. For example, four artist residencies will allow Native artists (working in visual, performative or musical media) to showcase representations of their own engagement with the material.

Furthermore, digital mapping will allow the project to produce truly ground-breaking interactive maps of the journeys made by Native travellers, which will create powerful visual representations of these transatlantic networks.

The findings of the project will also be disseminated as widely as possible including through public workshops, the creation of educational resources for school students, creative partnerships with local art groups across Britain, and open discourse with Native communities in the USA and Canada.