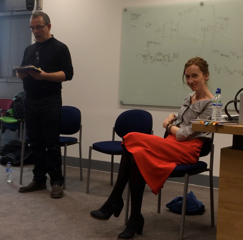 Without Mastery comes from outside the current scene. It takes its bearings from writers and characters that I have been reading for some time now: Plato, Robert Browning, Freud, Elizabeth Bowen, Derrida, Cixous, among others … in that sense there are masters everywhere in the book. They think, they write and they teach, they are very active still.

At the launch in Sussex someone in the audience asked: ‘Why ‘mastery’? Why not ‘force,’ or ‘power’? And isn’t there a positive mastery, a kind of sill, like someone who can play a musical instrument. Isn’t that something good and something not to be without?’

The questions revealed to me that it was ‘Mastery’ in the title because the book engages with sexual difference and the word ‘master’ suggests someone who is a man or in a mould that is masculine or in thrall to what Cixous calls a masculine economy. I wanted that to be marked in some way.

I could also have said in response to the question from the floor, that the book thinks about Hegel and the economy of thought outlined in the master-slave relationship described in the Phenomenology of Spirit. There is some significant reference to Hegel in the book, and I read a surprising amount of Hegel while I was working on it. One way to think about the book is in terms of something-other-than-dialectic that might shape or guide thinking. But it’s perhaps indicative of my approach to philosophy that I go to the texts with an ear for their language (German, Greek, French … some heard more limpingly than others, I am no master of languages, but I try very hard to understand, to hear and see the movements of signification in the original language). This same ear also picks up the vibration of sexual difference in writing. ‘Can there be, and how can there be a relation between us without mastery?’ are questions the book puts to its reader all the time.

As the book’s first reader, the one who had to read the book in order to write it, I experienced these questions while I was working. And I went to poets and poet-thinkers that I love to help me try to make a kind of living answer to the book’s promptings. Sometimes also I turned to film, to music, to experiences and perplexities in my own life that had in some way put me in line for the experience of necessity makes us think, or that thinking is.

Chapter 3, one of the earliest-written, makes explicit the engagement with Ananke, Necessity. For Plato, Freud and Derrida, Ananke is a woman, a very powerful woman and they are not afraid to love her, to avow her power and even befriend her. The chapter puts these thinkers in touch with the more relaxed but, I would insist, no less momentous relation to necessity and thought that occurs for girls and women in their friendship for each other, as Bowen tells it in her tremendous novel The Little Girls.

The Little Girls also poses the question of ‘the far future.’ For Bowen this had to do with the nuclear threat that like all threats and interruptions makes some capitulate, saying it is too late, and gets others, like Derrida or Bowen’s character Dinah, attending still more carefully to the archive: making contact, gathering memories together, preserving what is of value, making room for the movement between what are casually and confusingly called present, past and future.

For us today ‘the far future’ is a thought interrupted by climate change. I could not ignore this. I took the notion, the feeling, the denied reality of climate change to contemporary thinkers (reading far more than got into the book, as usual) but also to Shakespeare, Milton and others. Believing ourselves masters of the earth has brought much trouble in its wake. Could this book make room for the earth in a way that didn’t give way to the grandiose magical thinking that Freud calls ‘the omnipotence of thoughts’?

Still, a belief in magic – the magic of writing and reading – is part of why I do what I do and part of what I love about books. Witches, little girls, angels, animals and birds, it turned out, were not averse to the book. They came to visit it and stayed in it: images of a resistant weakness, a wildness of writing without mastery but not without force or natural grace.