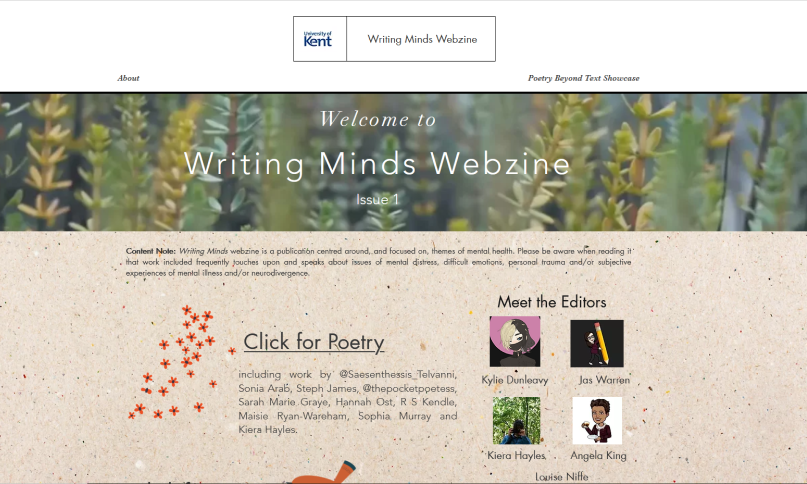 Writing Minds is a brand-new webzine curated and edited by a neurodiverse editorial team of undergraduate students. As a part of the School of English’s Summer programme of activities, the team of student volunteers took part in all aspects of the editorial process. The webzine showcases creative and critical prose, poetry and multimedia work exploring topics surrounding mental health, mental illness, and/or neurodivergent experiences.

The webzine is part of a longer project which began in 2019, led by Dr Nell Perry. Originally functioning as a series of in-person workshops, it later developed into an online creative space during the COVID lockdowns. Now, thanks to the hard work of the Writing Minds editorial team, the website has been revitalized for 2022. The callout for submissions to the first issue received a high volume of responses from Kent students, alumni, and writers from beyond the University, from as far away as Ireland, Spain, and the USA.

“We covered the entire process of making a zine from how it should look, to social media marketing, to receiving/responding to submissions and deciding which to publish in just a few short weeks,” says editorial team member and Writing Minds social media co-ordinator, Kylie Dunleavy, a first year English Literature student. “For those dealing with mental health concerns or living with neurodivergence, we’re often left out of conversations. With this project, we were not only a part of the conversation – but we were put at the centre of it. This allowed us to engage with others who may also often feel their voices aren’t easily heard.”

Fellow editorial team member Kiera Hayles, a second year English Literature student agrees. “Working towards a goal which we were all passionate about really highlighted to me the social nature of my degree. Most of all I think I experienced a new-found appreciation for my degree; seeing the real-life application of literature, the power it holds, and the role is plays in human connection and expression.”

The Writing Minds webzine project builds on ideas that students explore in the English Literature second year undergraduate module Perceptions, Pathologies, Disorders: Reading and Writing Mental Health, which some of the editorial team members took in the Spring term, while others are due to take it next year. In the module, students examine, respond to, and reflect upon, a range of representations of mental health, mental illness, madness and neurodivergence in literature and culture.