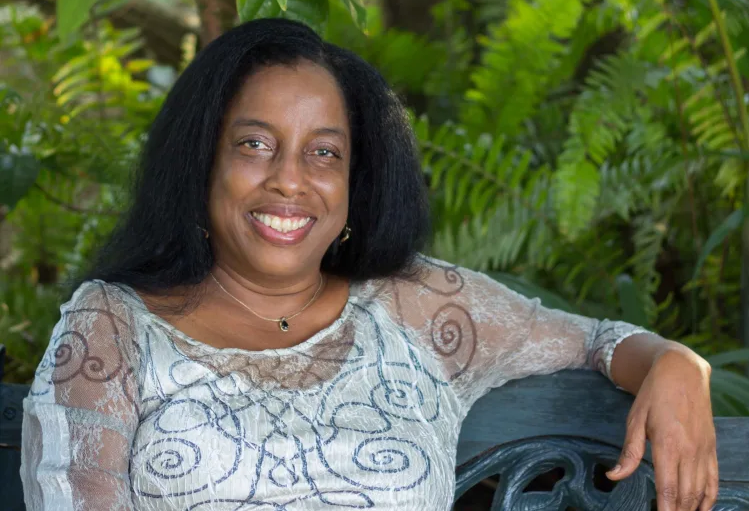 School of English PhD student Winsome Monica Minott has recently been nominated for the major literary award, the OCM Bocas Prize for Caribbean Literature. Her second book of poetry, Zion Roses, has been longlisted selected from a batch of 2021 poetry collections that included several experienced and award-winning poets.

For Winsome, the nomination was unexpected. “I was in the Gulbenkian Café having coffee when I received an email sharing the good news,” said Winsome, recalling the moment she found out about the nomination. “I read it three times: I had no expectation for Zion Roses to be named.”

Winsome’s poetry is concerned with Caribbean writers who are searching for home. Her first collection explored Jamaican womanhood expressed in both standard English and patwa – a hybrid language spoken in Jamaica which melds a variety of African languages with standard English. This celebration of linguistic heritage continues in Zion Roses, which uses multiple characters and voices to further explore the African heritage of Jamaicans. Explaining her use of voice and language in her work, Winsome explains: “I immerse myself in the life of each character, collapsing time, and occupying the place where the character may best be situated. It allows me to hear from the individual, and speak on matters, that the character might wish to be articulated.”

But for Winsome, the use of different languages is not solely poetic. Many of the characters in Zion Roses are disenfranchised Jamaicans carrying trauma in their DNA, passed from one generation to the next. In Zion Roses, Winsome connects the numerous atrocities committed under colonial occupation to the violence which is still ever-present in Jamaica. She hopes that her writings can help encourage an understanding of what transpired, towards healing among peoples. She elects to embrace patwa, one manifestation of this aim to uncover history. “If a writer wishes to speak for a people, it is best for the writer to employ the language of the people, in so doing the writer is recovering lost stories and voices, indirectly recovering history.”

Winsome is a PhD student in the School of English on the Poetry: Text Practice as Research programme. Reflecting on her development as a poet, Winsome says: “Professor David Herd has been instrumental in my continued growth as a poet. I have with his encouragement extended the depth of my poetry and become less anxious to complete a poem or a critical chapter.”

But even after receiving this prestigious nomination and extensive praise for her work to date, Winsome still feels like she is at the outset of her literary journey. “I believe I am only now finding my footing,” she says, reflecting on her time at Kent so far. If nominations and accolades abound from the start, we are excited to see where her work will take her next!

Kumina Queen and Zion Roses can be purchased from Peepal Tree Press, Waterstones and other booksellers.