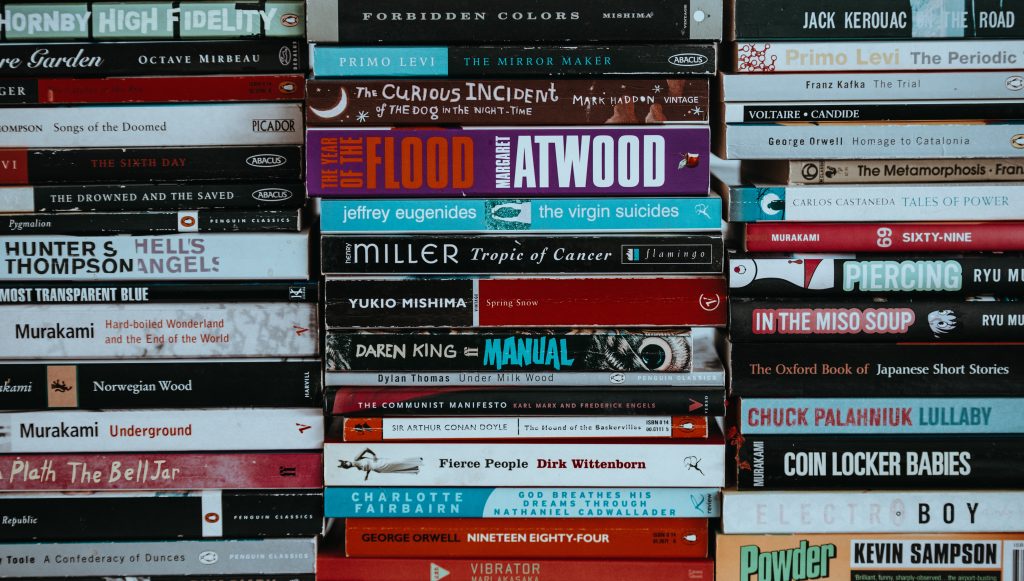 Academic staff in the School of English have put together a list of recommendations of books that have either changed them, that they connected with in their formative years, or that are relevant to current social issues.

We’ll be posting these recommendations and more on the School of English Instagram account. To join in the conversation, submit your own book recommendations using the hashtag #booksthatmademe.

Professor Caroline Rooney, Professor of African and Middle Eastern Studies, has chosen The Collector of Treasures (Bessie Head, 1977) as a book that influenced her. ‘I grew up in Southern Africa at a time when no African literature was studied at school or at university,’ says Caroline. ‘In my early twenties, I met the novelist Bessie Head and began to read her books. Her work inspired me to study and learn from African literature so that I could help to bring this literature to others to study and learn from. Bessie Head has a strong African humanist vision and a lyrical prose style.’

Caroline’s books for our times include Moby Dick (Herman Melville, 1851), ‘for the oceanic horizons, for the friendship between Ishmael and Queequeg, for respect for animal life (especially anti-whaling)’, and Sharon and My Mother-in-Law: Ramallah Diaries (Suad Amiry, 2006). ‘Based on diaries, this literary work is about how the author had to see through a 42-day curfew (a kind of lockdown) in Ramallah with her mother-in-law. Suad Amiry writes about her difficulties and frustrations with a stoical and satirical humour that is liberating.’

Dr Matthew Whittle, Lecturer in Postcolonial Literature, chose The Lonely Londoners (Sam Selvon, 1956). ‘I’d never read anything like this novel before encountering it during my Masters,’ says Matthew. ‘The familiarity both of London and of reading a novel are made unfamiliar through the mix of English and Trinidadian patois and the dramatization of post-war migrant life at the former heart of the British Empire. The perfect place to start to understand the significance of the “Windrush generation” and the legacies of Empire for British society and culture.’

Matthew’s choice of book for the moment is Foreigners (Caryl Phillips, 2007). ‘Phillips tells the stories of three black lives – Francis Barber, the Jamaican servant to Samuel Johnson; Randolph Turpin, Britain’s first black boxing world champion; and David Oluwale, a Nigerian man who sought refuge in Leeds but was hounded to his death by the police. Together they constitute a compelling account of racism and alienation in Britain that examines the very concepts of foreignness and belonging.’

Claire’s pick for a formative book is Beloved (Toni Morrison, 1987): ‘I read it when I was 17 and it was the first book that got me into reading African-American literature, which I now specialise in.’ For our times, Claire recommends Lola Olufemi’s, Feminism, Interrupted: Disrupting Power (2020) and Robin DiAngelo’s, What Does it Mean to be White? Developing White Racial Literacy (2018).

Dr Simon Smith, Reader in Creative writing chose Return to My Native Land (Aime Cesiare, 1939). ‘I found it in Truro, Cornwall when I was on holiday aged 18, leaving school and just before I came up to Kent as an undergraduate,’ says Simon. ‘An amazing ur-text of Post-Colonialism and Modernism, in poetry and prose, first published at the beginning of the Second World War. Proof that the fragment was not solely the invention of T.S. Eliot’s The Waste Land.‘

Simon has chosen two books for our time. His first pick is Elegguas (Kamau Braithwaite, 2010), an epic poem of the Caribbean, a kind of ‘brother’ poem to Derek Walcott’s Omeros and ‘a book I reviewed for Poetry Review when it was first published’. His second pick is Urban Tumbleweed: Notes from a Tanka Diary (Harryette Mullen, 2013): ‘a book written over a year when Mullen arrived in California, a diary charting her thoughts while walking the streets and parks of Los Angeles with her headphones on. She employs an ancient Japanese short form, the tanka, usually used to record rural pastoral experience. The radical rethinking of this aesthetic is matched by the radical (perhaps even dangerous) activity of a woman of colour walking in the town of the automobile, where politics meets art.’

David Flusfeder, Senior Lecturer in Creative Writing, has chosen Invisible Man (Ralph Ellison, 1952). David says: ‘I came across this book, more or less by chance, in a bookshop which I found to browse in on an excruciating family summer ”holiday.” There was a concern with race that I hadn’t begun to think about before, but also a whole universe of literary psychology, of inwardness, of a most developed self-consciousness that was both overwhelming and a kind of revelation.’ Another of David’s picks is The Castle (Franz Kafka, 1926): ‘on one level it’s an abstracted kind of journey to a place that can never be reached, because of social and legalistic processes enacted by characters who might be bored or tender or cruel. Throughout there’s a hard mystery to this book that I will never quite grasp, that invites and resists multiple re-readings.’

Dr Sara Lyons, Senior Lecturer in Victorian Literature, says ‘my first recommendation is Wayward Lives, Beautiful Experiments: Intimate Histories of Social Upheaval (Saidiya Hartman, 2019). This is a book about how young black women tried to live full, emancipated lives in early twentieth-century America. It’s often harrowing but also genuinely inspiring in its effort to reconstruct the dreams and rebellions of apparently “ordinary” black women. It’s a work of scholarship but it has all the immediacy and psychological depth of a great novel. I also recommend The Confessions of Frannie Langton (Sara Collins, 2019), which is a dazzling Gothic novel about the adventures of a young Jamaican woman in Georgian London.’

Dr Michael Falk, Lecturer in Eighteenth-Century Studies, chooses Gulliver’s Travels (Jonathan Swift, 1726) as a formative book. ‘Gulliver’s Travels is simply one of the funniest, smuttiest, wittiest, angriest and wisest books I’ve ever read. Swift was a furiously inventive writer. In Gulliver’s Travels, he sends his main character, Lemuel Gulliver, across the world to learn the truth about science, philosophy, religion and politics. Virtually every page is packed with ideas about the dangers of computers, the violence caused by human prejudice, the evils of colonialism, the pettiness and corruption of politics, and the filthiness of human beings. Swift isn’t always right, but he’s always brilliant. When I read Gulliver’s Travels as a teenager it made me realise what literature can do. I have revisited the novel repeatedly over the years, and every time I find it retains is freshness and relevance—which is not mean feat more than 300 years after it was first published.’

Michael’s pick for a book for the present is Carpentaria (Alexis Wright, 2006) Michael says: ‘Carpentaria is the masterwork of Australia’s finest living novelist, Alexis Wright. Wright is a Waanyi woman from Australia’s tropical Top End and Carpentaria is her epic, magical, poetic book on life, love, race, economics and the environment in Australia’s remotest regions. Carpentaria is the story of Norm Phantom and his family, Aboriginal Australians who live in the indigenous shantytown on the outskirts of Desperance, a fictional town on the continent’s northern coastline. It’s a sprawling novel. Norm is trying to reconnect with the sea. His son Will is fighting a guerrilla campaign against his former employers, a mining company. Their friend Mozzie Fishman is leading a strange indigenous religious cult across the tropical plains. Angel Phantom is feuding with the neighbours. The old white sailor Elias pursues his strange course. And a host of other characters fill out Wright’s rich and wonderful world. Carpentaria is a powerful epic, a book for all times. But in the Fifth Age of Extinction, in the midst of the global #BlackLivesMatter movement, it is also a book for the present.’

Professor David Stirrup, Professor of American Literature and Indigenous Studies, says: ‘the book that first started really opening my eyes was Chinua Achebe’s Things Fall Apart (1958), which I read when I was 14′. David’s recommendations for our times: ‘definitely Reni Edo-Lodge’s Why I’m No Longer Talking to White People About Race (2017), and I always recommend James Baldwin’s The Fire Next Time (1963). For a bit of a fresh avenue, I’d also really like to suggest Tiya Miles’s Crossing Waters, Crossing Worlds: the African Diaspora in Indian Country(2006).‘

Dr Stella Bolaki, Reader in American Literature and Medical Humanities, recommends two of her formative books: ‘Audre Lorde’s Sister Outsider for daring us to find ways to activate the “creative power of difference” in our lives. In her words, “it is not our differences that separate us but our refusal to recognize those differences and to examine the distortions which result from our misnaming them.” James Baldwin’s Collected Essays, for eloquently articulating the complexity of racial divisions in America, including their deep emotional and existential dimensions.’

‘An academic study that I would recommend for this moment is Sara Ahmed’s On Being Included: Racism and Diversity in Institutional Life, for arming us with critical tools to examine the “language” of diversity as it’s being used in higher education institutions and the ways it often serves to obscure racism.’

Professor Peter Brown, Professor of Medieval Literature, chose John Lennon, In His Own Write (John Lennon, 1964) as a book that changed him. ‘On a foggy December evening in 1966, a group of us from school drove from the Potteries (Stoke-on-Trent) to the ABC Ardwick in Manchester to see the Beatles play a concert. They had just released Revolver and were on the crest of a wave. We were standing on the backs of our seats, standing there with arms linked to get the best view. While our parents might have disagreed, we knew that the Beatles were the real thing, naturally creative way beyond the limits of pop music. John Lennon’s book, published two years before, made that point. It is full of the joy of playing with words, inventing worlds, and turning conventions on their head. The book was wildly successful, and in 1968 became the basis for a play at the National Theatre’.

Peter’s pick for his book of the moment is Fresh Water for Flowers (Valerie Perrin, 2020). Peter says: ‘I spent the last four years working in Paris as Academic Director of the Kent’s Paris School of Arts and Culture in Montparnasse, that famous haunt of writers and painters (Gide, Hemingway, Pound, Picasso, Cocteau, Apollinaire, Satie, James Joyce, Henry Miller, Beckett, etc.). The Centre runs MA programmes in English and in Creative Writing, as well as other programmes, and to help students connect with the quartier, and we sent them to the local cemetery. Not as odd as it might sound: Paris cemeteries are havens of quiet, full of interesting and well-tended monuments, and the resting places of a pantheon of cultural icons connected with Paris in one way or another, including Baudelaire, Beckett, Sartre, Simone de Beauvoir, Man Ray, Susan Sontag, Oscar Wilde, Jim Morrison, Serge Gainsbourg, Marcel Proust, Balzac, Colette, Edith Piaf and so on. Perrin’s book is set in one such cemetery and centres on its guardian who is charged with looking after the graves. In the course of her duties, not only does she muse on the dead, but forms friendships with the living – those who come to pay their respects to the departed. The book is uplifting, rather than macabre. It evokes a world that is characteristically French, brings back for me happy memories of living in Paris, and is a reassuring read at a time of pandemic.’