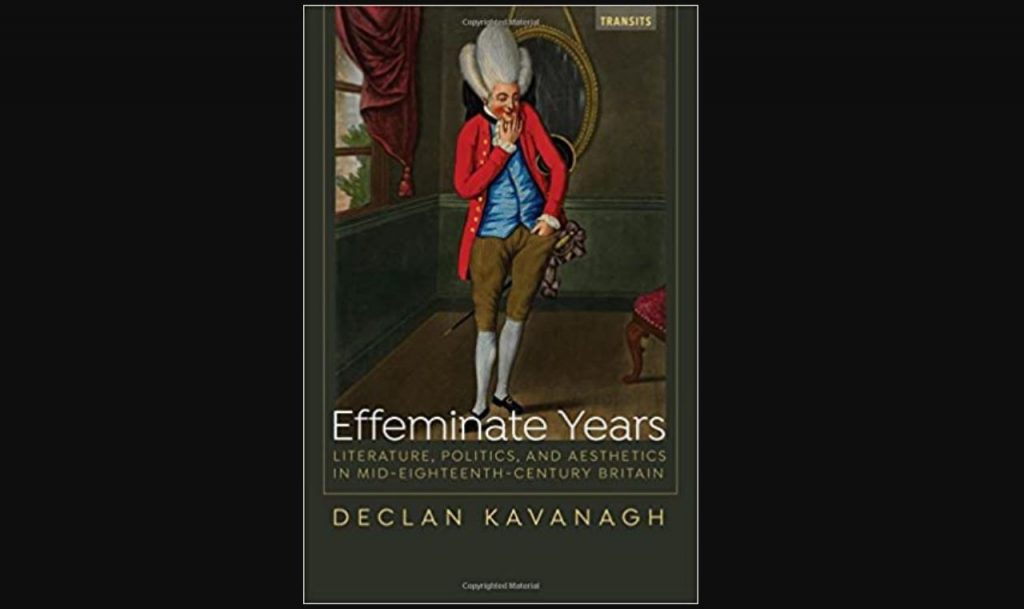 Dr Declan Gilmore-Kavanagh, Senior Lecturer in Eighteenth-Century Studies, has had his book Effeminate Years: Literature, Politics, and Aesthetics in Mid-Eighteenth-Century Britain (Bucknell University Press, 2017) chosen by the American Society For Eighteenth Century Studies as a featured book in their list of outstanding scholarship in queer eighteenth-century studies. The list was created in celebration of Pride and the Landmark Supreme Court Ruling in Bostock: Title VII.

Katherine O’Donnell (University College Dublin), says: “Effeminate Years explores how ideal versions of masculinity become imbricated in idealised versions of nationality and ethnicity. Specifically, this book reveals how discourses of effeminacy and idealised masculinity structure the formation of English, Irish and Scots ethnic identities in the years when the project of the British Empire was emerging from infancy. The mid’ years of the Eighteenth Century saw the final defeat of Gaelic Jacobite hopes and the consolidation of an ascendant English Protestant nationalism which segued into British colonialism. Effeminate Years provides a remarkably comprehensive, deft and very entertaining account of the culture wars of these important years to demonstrate how the cultural productions of the era manifest anxiety, opportunism and counter-strategy about what kind of man should and would lead the development of Britain and expansion of empire.”

The full list of scholarship is available on the American Society For Eighteenth Century Studies’ website, here:
https://www.asecs.org/single-post/2020/06/29/Recent-Works-in-Queer-Eighteenth-Century-Studies-in-Celebration-of-Pride-and-the-Landmark-Supreme-Court-Ruling-in-Bostock-Title-VII