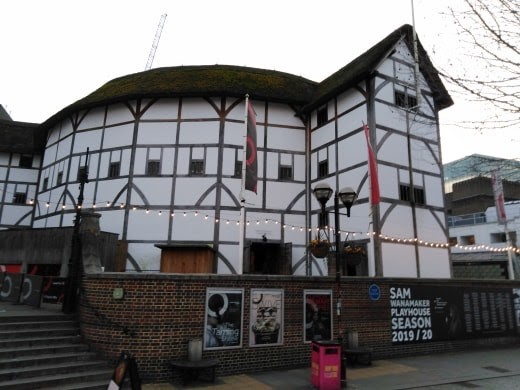 London, Southwark. The second month of winter. St Paul’s Cathedral basking in the sea of sunbeams, and just opposite, on the south bank of the river Thames, standing proud, is the canon of Shakespeare – The Globe Theatre. Our group of enthusiastic pilgrims, guided by Dr Jon-Mark Grussenmeyer, made it to the historically and culturally significant place in England. The home of theatrical spectacle; of grandeur that was made to entice senses and question morals. To entertain thousands until they lose their wits from laughter or despair. The place where an Early Modern Drama grew its roots and welcomed people from any background.

The winter season is bustling at Sam Wanamaker’s Playhouse, but as there was no play performance at the Globe the day we travelled there – the flag was not up dancing against the wind. Sadly.

Soon as we walked in through the timber framed doors, we were stunned to witness the magic of theatre goer back in Elizabethan time. First by pretending to be groundlings we were directed to the edge of the thrusted upon stage. Back in those times, one thousand people could be accommodated within The Globe’s ‘ground’ section with the sky torn-open ceiling, for the welcoming of the sunlight or rain, if one was unlucky. Thrilling, isn’t it? Due to the absence of artificial lighting, to watch actors perform in any weather conditions made them not only more respected to the public but also, quite daring. Whereas the public was brave enough to withstand any storm to see its favourite plays unfold in front of them in eloquent, expressive and ostentatious way. But let’s not forget about the poor hygiene of the low borns: the butchers, fishmongers and tanners. They reeked grossly! Which, if you are a nobleman, would be of utter nuisance to be in their presence. Although be assured ‘tis never happened, for, the high borns were seated only at the Gentlemen’s Boxes – solely to be admired and to show their status to the peasants beneath them, cheering abundantly for upper class characters.

As we gazed upon The Boxes’ walls embellished with Greek mythological ornaments of Elysium fields and ancient Hellenistic heroes, bringing a sense of nostalgically induced sense of art and lavishness to the Bard’s wooden creation, we were transported in time to practically feel the weariness of some groundlings in the yard, who were subjected to standing roughly three or four and a half hours squashed together. Thus, everything depended on actors’ agility to keep the crowd amused long enough, for consequences could be punitive. Usually, in the form of rotten pieces of vegetables and verbal abuse – boo!

As we finally ascended the noblemen’s seating place that we were ‘envious’ of for a good amount of time, we realised that even though the gentlemen had a privilege of a rooftop over them, their lower backs must have been in pure agony for the whole duration of performance. Although soft cushions were provided to them, it didn’t minimise the pressure of sitting straight with one’s body bent forward or slouched. So, it could be said that not everything was as comfortable, as it seemed.Thus, since 1609, Shakespeare moved his company from open-air theatres to an in-door theatre at Blackfriars, for a more refined audience.

Unfortunately, we were not able to enter or even peer inside Sam Wanamaker’s Playhouse since the actors were preparing for the play, The Taming of the Shrew, directed by Maria Gaitanidi. But that did not stop us from thinking about how lavish the scenery and the stage of it was, as our tour guide kindly (or rather cheekily) presented to us the picture of it.

In Elizabethan England, theatres did not engage in employment of stage scenery, instead theatre companies invested in acquiring and developing a plethora of costume sets, with each company having an ownership over them and not actors, as they were extravagant. Also, partly due to some sources stating that there were cases when actors were suspected wearing costumes to disguise themselves as aristocrats as a form of ridicule, which led to many scandalous situations. While women were not allowed on stage, young boys were enjoying the cross-dressing ritual and the quality of finest fabric costumes – the lucky ones!

The Globe Theatre is ‘an academic approximation’ based on the only survived drawings of 1599 and 1614 buildings. Despite that historians succeeded in making the best guess as to how The Globe Theatre looked like back in Shakespeare’s time, most of the information on how the plays were performed is lost, so the directors can now only rely on some parts of it that had survived. As well as, not much is known about actors and how they chose to perform their parts, only from what is recorded in first-hand accounts of the plays. Which again, prompts for more interpretation from directors.

Although we were ‘forbidden’ from seeing the in-door playhouse, we managed to peruse a small collection of items loaned to the Globe for an exhibition. As seen above, the painting of Ariel from The Tempest. Indeed. So dreamily magical! Interestingly, alongside colour coding technique: a black flag meant a tragedy, white a comedy, and red a history, the pictures were used to indicate what play was showing that particular day, as plays were performed daily with a different play each day. Through an intricate drawing of a play, theatregoers were aware of what to await for and whether they particularly were taken with the genre.

After the much-anticipated tour, the last stop (comically enough) was the gift shop! To our astonishing enthusiasm, each of us found something precious to take home. From a collection of books to hand-made props, stationery and many awe-striking things suited for any Shakespeare’s lover – the golden mine, truth to be told. For instance, my prized possession was Shakespeare’s bust which I shall put on my literary shelf and look upon for inspirational musings!

Even the set of old keys!

The tip proved to be an adventure that we will certainly never forget. And we shall come back again to quench our thirst for the world of Elizabethan drama when the Globe Theatre opens its doors for the summer season.