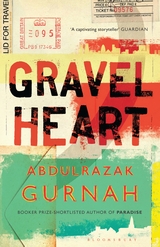 Professor Abdulrazak Gurnah was born in Zanzibar and teaches English and Postcolonial Literatures in the School of English. His latest novel, Gravel Heart, was published with Bloomsbury last week. He is the author of eight other novels which include Paradise (shortlisted for both the Booker and the Whitbread Prizes), By the Sea (longlisted for the Booker Prize and awarded the RFI Temoin du monde prize) and Desertion (shortlisted for the Commonwealth Prize). He was appointed as a Man Booker Prize judge in 2016.

Salim has always known that his father does not want him. Living with his parents and his adored Uncle Amir in a house full of secrets, he is a bookish child, a dreamer haunted by night terrors. It is the 1970s and Zanzibar is changing. Tourists arrive, the island’s white sands obscuring the memory of recent conflict–the longed-for independence from British colonialism swiftly followed by bloody revolution. When his father moves out, retreating into disheveled introspection, Salim is confused and ashamed. His mother does not discuss the change, nor does she explain her absences with a strange man; silence is layered on silence.

Further details can be found on the Bloomsbury website.