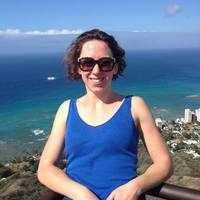 Emma Scanlan, a School of English alumna, recently contacted Prof. Donna Landry to uphold ‘a promise’ she made nearly five years ago when she was a taught MA student on Prof. Landry’s module ‘Extremes of Feeling: Literature and Empire in the Eighteenth Century’. The promise related to the commentary on an essay. Here, Emma tells her story:

Doing a PhD was never the plan. I decided to study for an MA in English Literature at the University of Kent because having travelled the world I’d found a reason to stay home for a year – I’m now married to him. Post-crash jobs were scarce, and I still had no idea what I wanted to ‘do’. As this intellectual endeavor was purely for pleasure, I chose modules that corresponded to my interests in travel and global literatures. The plan was to travel in literature for a year, and then, if all was well, to persuade him to move somewhere warmer, and nearer the beach.

Studying on Professor Landry’s module “Extremes of Feeling: Literature and Empire in the Eighteenth Century” posed only one dilemma — how to choose which text and topic I was going to write my essay on, as the options were endlessly engaging. I settled on historical reenactment and wrote about maritime reenactment in Australia and Hawai’i. Whilst researching I discovered that Hawai’i’s history was considerably less straightforward than I had known, and that a vibrant indigenous resistance movement had been flourishing for the past fifty years. A few collegial conversations quickly indicated to me that I was not alone in my ignorance of what had happened in Hawai’i after Captain Cook had met his bloody end on its shores in 1779. Having what is euphemistically termed a “curiosity problem”, and still under the misapprehension I would soon be departing Kent for warmer climes, I continued reading about Hawai’i long after I had enough material for the essay.

Professor Landry’s commentary on the essay kindly hinted that, if I worked at it, this essay might one day be publishable. Enchanted by this small piece of encouragement, I decided I could probably make a go of an academic career. Five years later I’ve written my PhD thesis on the political poets of the Native Hawaiian Renaissance. My intellectual journey over the last five years has been in no small part due to “that” Masters essay. After many revisions (the final one submitted the day after our wedding) “Reimagining National Identity through Reenactment in the Pacific and Australia” was finally published.