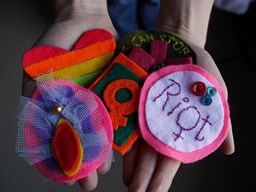 Katja May (School of English PhD student) will be running a Feminist Craftivism Workshop as part of a symposium on Gender, Sexuality and the Sensory, which will be taking place on Friday 19th May 2017 at the University of Kent.

Participants at the symposium are encouraged to join these workshops during the breaks to explore gender, sexuality, and the sensory through the creative engagement with needle and thread. Guidance will be given on making your very own feminist felt badge and you’ll be given the opportunity to experience a practice-based approach to questions of feminism, crafts, activism and the sensory.

During the act of making (a painting, a knitted hat, a clay bowl or a felt badge) materials, ideas or both are connected and turned into something new. The maker hereby inhabits a curious position; he or she not only connects the individual materials, but with the materials themselves and his or her own physical presence in the world through a sensory and kinesthetic engagement with them (Gauntlett 2011). For instance, as the cool metal of the knitting needles rests against the skin of one’s hands, the regular and rhythmic motion of knitting provides a space for body and mind to rest and wander. As such, creative practices of making provide an opportunity to “maneuver the mind inside or around an impasse [as] forms of agency that can take the form of literal movement and are thus more e-motional or sensational or tactile” (Cvetkovich 2012: 21).

The ‘Craftivist Movement’, coined in 2002, embraces the premise as it marries craft with activism. Practices of needlework such as embroidery, crochet, knitting, and quilting, because of their popular connotations with traditional femininity, have been widely appropriated by feminists and gay rights activists (Cvetkovich 2012; Parker 1984; Sedgwick 2003; Roberts 2011; Robertson 2011). Consider, for example, the iconic AIDS memorial quilt project or the millions of pussyhats as seen at the recent women’s marches across the world. As you’re making your own felt badge you’re invited to think about the implications of such projects and practices and to share them with fellow makers as well as future admirers of your badge!

More details on the symposium and workshop can be found here: https://www.kent.ac.uk/sspssr/news-events/gender-sexuality-sensory.html