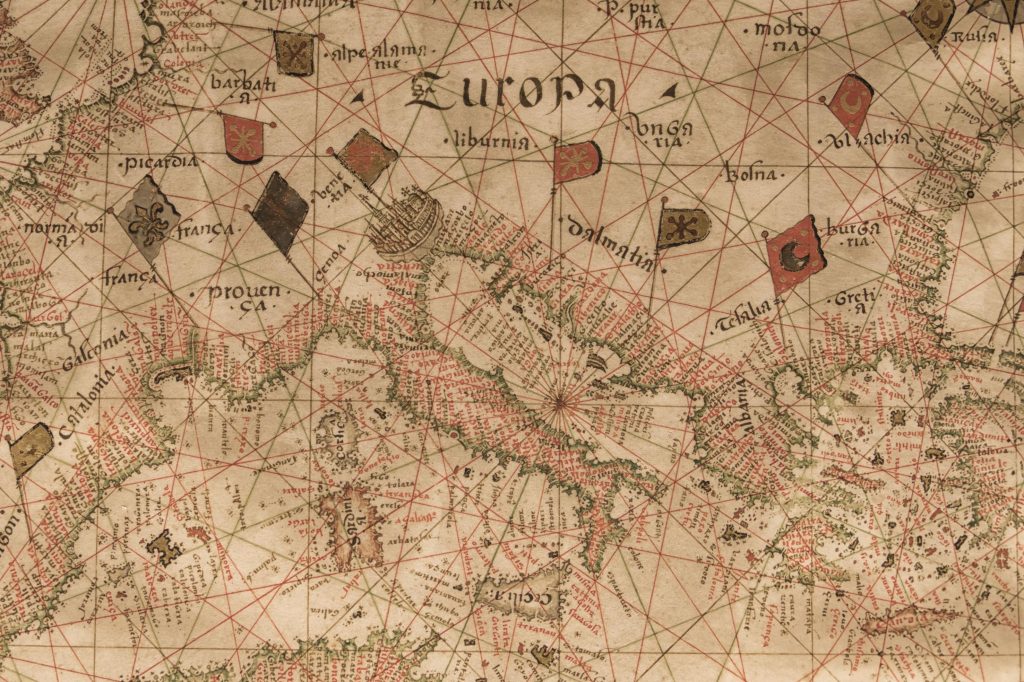 “What place is this, what land, what quarter of the globe?”: The Compass of Story in Dislocated Times

(Followed by a reception in Grimond Foyer)

T. S. Eliot’s question, inspired by Shakespeare’s Pericles, arises from circumstances of utter loss, disorientation, shipwreck and near-death on arrival in a strange new place. But even when stripped of all outward possessions and even identity, every arrivant is still the ‘bearer-being’ of culture, stories, and memories. To quote another poet, Cavafy, we all carry our Ithakas with us: walls and borders have very little power over our minds, and stories travel the world regardless of religion, race, or even language.

Against the background of the current refugee crisis, Marina Warner will look at migrating stories, from myths of Troy to Eliot’s uses of Christian legend, and trace the compass bearings they offer.

Marina Warner is a writer of fiction and cultural history principally inspired by myth and fairy tale. Her books include Alone of All Her Sex: The Myth and the Cult of the Virgin Mary (l976), Joan of Arc: The Image of Female Heroism (l982) and Monuments & Maidens: The Allegory of the Female Form (l988). In l994 she gave the BBC Reith Lectures on the theme of Six Myths of Our Time. She has explored the fairytale tradition in From the Beast to the Blonde (l994) and Making Monsters: On Scaring, Lulling and Making Mock (l998). Her study of the Thousand and One Nights, Stranger Magic: Charmed States and The Arabian Nights (2011) won a National Book Critics Circle Award, the Truman Capote prize, and a Sheykh Zayed Prize in 2012. She has curated exhibitions, including The Inner Eye (l996), Metamorphing (2002-3), and Only Make-Believe: Ways of Playing (2005), and contributed essays to books and catalogues, of Sigmar Polke, Anselm Kiefer, Kiki Smith, Joan Jonas and others. A selection of her essays on art, Seeing Feelingly, will be published in 2018. Her third novel, The Lost Father, was short-listed for the Booker prize in l988; it was followed by Indigo, a retelling of The Tempest, and, in 2000, by The Leto Bundle, a novel about a refugee travelling in time. Her most recent book is Once Upon a Time: A Short History of Fairy Tale. She is now working on a memoir-novel, Inventory of a Life Mislaid, inspired by her childhood in Cairo.  A third collection of short stories, Fly Away Home, was published in 2015. She is writing now about the idea of Sanctuary, and the role of culture in times of dislocation and diaspora, while developing a project in Sicily for storytelling in refugee communities, Stories in Transit.

Marina Warner is Professor of English and Creative Writing at Birkbeck College, a Professorial Research Fellow, School of Oriental and African Studies, London, a Fellow of the British Academy, a Commendatore nell’Ordine della Stella di Solidareità, a Chevalier de l’Ordre des Arts et des Lettres, and DBE. She was given the Holberg Prize in the Arts and Humanities in 2015.

The event is co-sponsored by Eliot College and School of English, and also by Centre for Postcolonial Studies and English Research Seminar.

Please go to the following website to register your interest: https://alumni.kent.ac.uk/events/ts-eliot-memorial-lecture-15-march-17