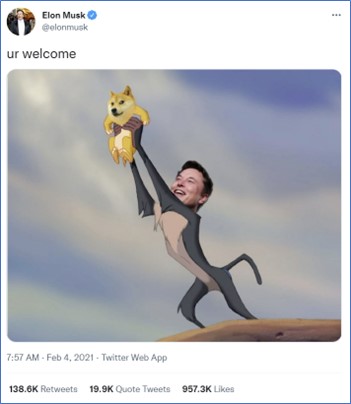 ‘Headlines recently have been filled with speculation concerning Elon Musk’s potential takeover of Twitter. Even though the board of directors accepted his $44B offer, it’s still subject to a shareholder vote and regulatory approval.

His pledge last Monday to “defeat the spam bots” and “make Twitter better than ever” received massive attention and inspired many jokes such as those in Figure 1 (Musk tweets satirically about Coca-Cola) and 2 (Musk responds to a meme concerning him acquiring McDonald’s), below.

Many theories already exist to explain how information can impact asset prices. However, Dogecoin is very unlike traditional assets. Absurd returns seem to have been triggered on several occassions by Musk’s tweets (which contain no financial information). For example, during the hour that these 4 tweets were posted, Dogecoin’s price surged up by 50%.

The aim of my study is to understand the drivers of this demand, so I split a sample of 39 tweets into categories based on their sentiment and content – e.g. positive/negative and whether they contain memes or are informative etc… and analysed their effects on the market.

While writing this dissertation has been very enjoyable, it has also been very useful. I have developed skills in various areas, particularly in conducting event studies. These allow you to see how an asset’s returns were affected by an event at a specific point in time. Below, I describe the one that I did for this blog…

The Effiicient Market Hypothesis suggests that Twitter’s acceptance of the bid should have no impact on the price of Dogecoin. For a bit of fun, I used an event study to see whether the theory is valid, with the results available here and here.

During the minute of the announcement, I found abnormal returns of 1.23%, while after 30 minutes, Dogecoin’s price had increased abnormally by 4.43%. These results are statistically significant at the 1% level (this means they are very reliable) and I found that further cumulative returns were only no longer significant after 55 minutes. A possible explanation for these observations is that, following all of his tweets, investors now see a strong connection between Elon Musk and Dogecoin, a concept wonderfully portrayed in the main image above.’

Kheireddine Adeyemi is studying for a degree in BSc Hons in Financial Economics with Econometrics with a Year in Industry.