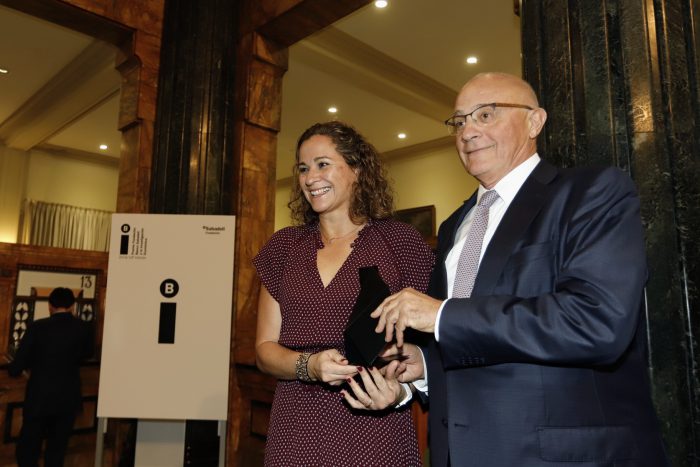 Congratulations to the School’s Professor Irma Clots-Figueras who received the XVIII Banco Sabadell Foundation Award for Economic Research at an awards ceremony on 8 October 2019.

Irma received this highly prestigious award for her quantitative research on gender aspects of political economy: http://ow.ly/Uetp50wGnPI. The award, which includes an endowment of 30,000 euros, aims to encourage and recognize the work of researchers in the fields of economic, business, legal and social knowledge and contribute to the analysis and formulation of alternatives that promote social welfare.

Established in 2002 and presented annually, the award is aimed at researchers under 40 who have an outstanding research curriculum in the aforementioned fields. Candidates for the award can be proposed by universities, academic and research centres, foundations, companies and other national and international institutions.

Irma was presented with the award by the president of Banco Sabadell, Josep Oliu, during an event at the headquarters of Sabadell Herro, in Oviedo, Spain, which was attended by the president of the Principality of Asturias, Adrián Barbón. Antonio Cabrales, Professor of Economics and Director of the Department of Economics at University College London and Executive Vice President of the European Economics Association, described Irma as “a special researcher in our country [Spain] in that her work highlights the interaction between political, social and economic development institutions”, and highlighted “her contributions to understanding how the participation of women in political life contributes not only to the well-being of women but to general well-being ”.

About the Banco Sabadell Foundation

The Banco Sabadell Foundation was established as a private foundation in 1994 with the aim of stimulating excellence and promoting knowledge of culture. Its objective is to promote dissemination, training and research activities in the educational, scientific and cultural fields, as well as to promote and support young talent.