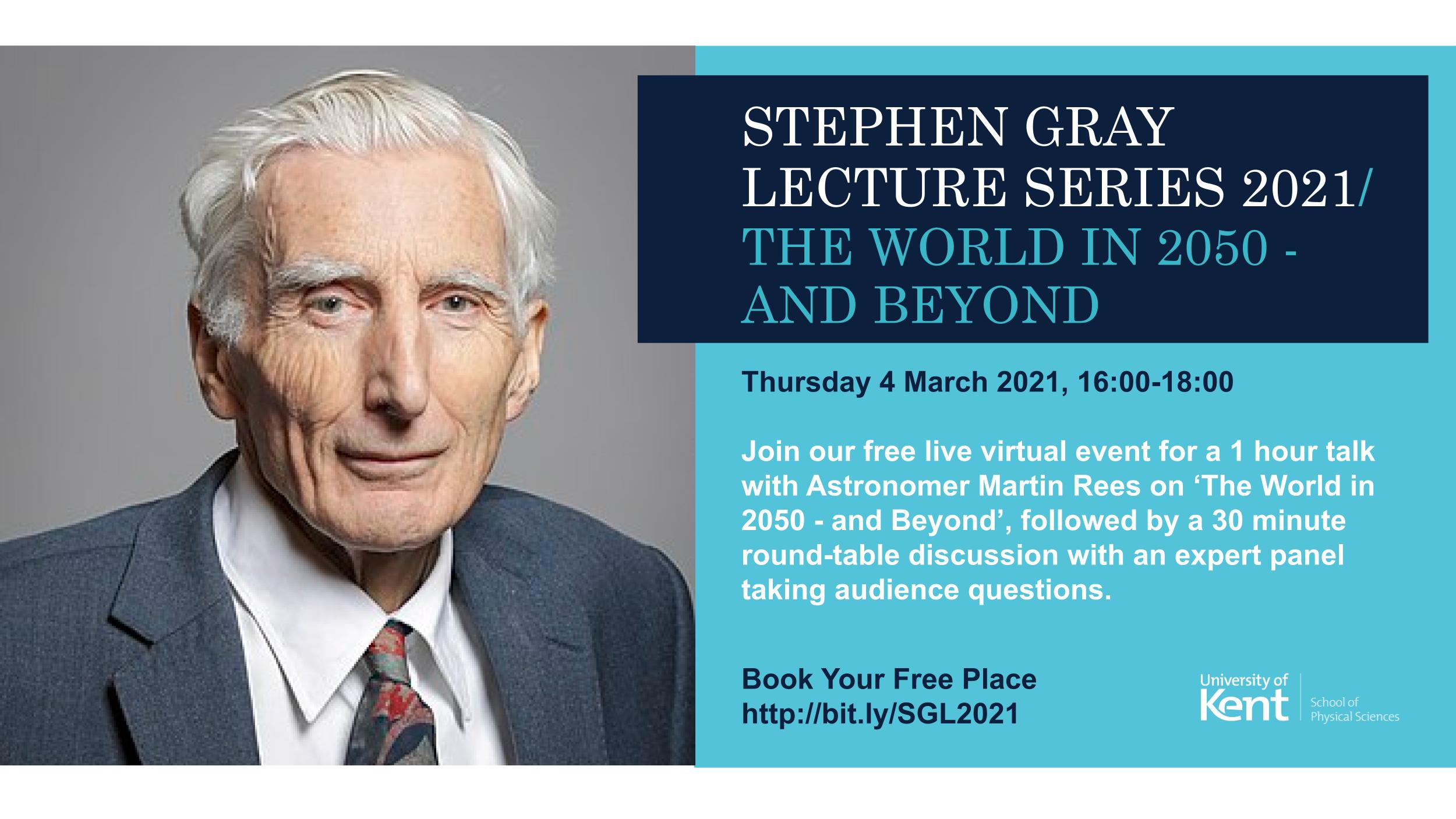 Martin Rees is the UK’s Astronomer Royal. He is based at Cambridge University where he is a Fellow (and Former Master) of Trinity College. He is a member of the House of Lords, and a former President of the Royal Society. His research interests include space exploration, black holes, galaxy formation, the multiverse and prospects for extraterrestrial life. He is co-founder of the Centre for the Study of Existential Risks at Cambridge University (CSER). In addition to research papers he has written many general articles and ten books, most recently ‘On the Future: Prospects for Humanity’, and a new edition of ‘Gravity’s Fatal Attraction: Black Holes in the Universe (with M Begelman).

During this public talk, Martin will discuss the topics in his latest book ‘On the Future: Prospects for Humanity’.

Named after one of Canterbury’s most notable scientists, the Stephen Gray Lectures were started in 2017 at the School of Physical Sciences at the University of Kent in Canterbury. The series boasts a fascinating line up of past speakers and topics, with this year’s speaker being no exception. You can view the previous lectures online.

The event will be held on Thursday 4th March 2021 at 4pm GMT and will take place on Zoom Webinar. The 1 hour talk will be followed by a 30 minute roundtable discussion with an expert panel taking audience questions. Panellists will be announced shortly. The event will be recorded, including the live Q&A.

After the lecture the Stephen Gray Lecturer will be joined by a panel of experts from the University of Kent for a round-table discussion of questions posed by audience members. The panel members will be Maria Alfredsson (Reader in Theoretical Materials), Robert Barker (Senior Lecturer in Chemistry and Forensic Science), Charlie Gardner (Lecturer in Conservation Science), Nigel Mason (Professor of Molecular Physics), who will also introduce the speaker, Jennifer Tullet (Senior Lecturer in Biogerontology), and Philippe De Wilde (Professor of Natural Sciences). Stephen Gray Lectures organiser Jorge Quintanilla (Senior Lecturer in Condensed Matter Theory) will be acting as host and moderator.

Tickets are free and can be booked on Eventbrite.

All joining details will be sent by email before the event.

For enquiries please contact natsmarketing@kent.ac.uk.  To hear about the latest public events in STEM, follow the Discover STEM@Kent blog for news and updates.