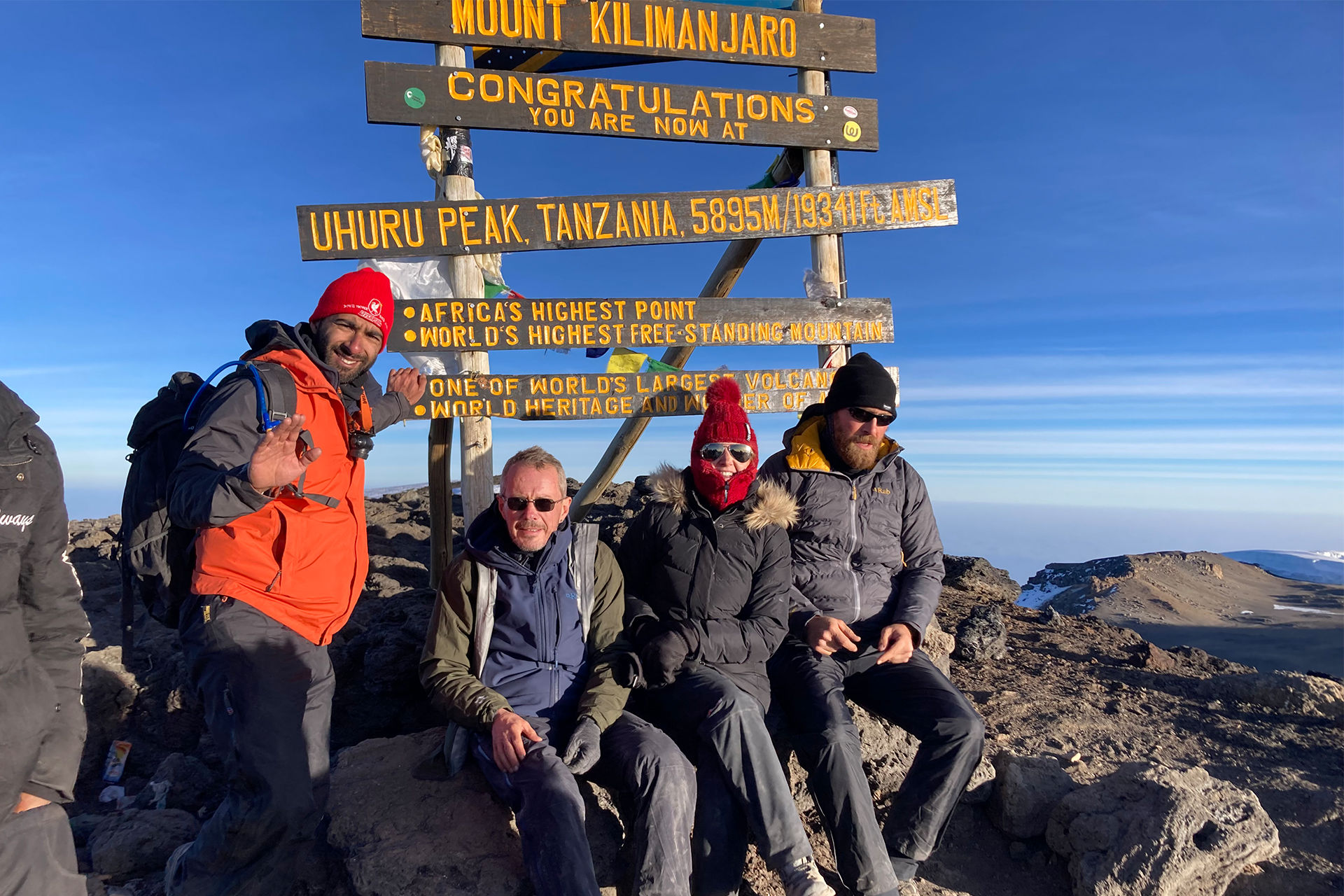 Alumnus, Rod O’Mahony (Eliot College, English & American Literature from 1979-83) tells his story of climbing Mount Kilimanjaro and why he decided to sign up!

“At the beginning of 2019, after 30-odd mostly sedentary years, I took up Parkrun on Saturday mornings in an attempt to get a bit fitter as I approached my sixties. Alzheimers Research UK (ARUK) is a charity partner of Parkrun, and so it was that in October 2019 I received an email seeking participants for a fundraising climb of Africa’s highest mountain, Mount Kilimanjaro.

“A year previously I’d have ignored such a ludicrous idea, but I was by this time running 2-3 times a week, and was at least a little bit fitter than when I started, so I paused before deleting the email – then, in a sudden rush of blood to the head, signed myself up. I really should have slept on it …

“The climb was scheduled for March 2021, so allowed plenty of time to get my fitness and endurance to the level that would be required. At 5,895 metres (19,341 ft.) above sea level Kilimanjaro isn’t a ‘technical’ climb – most routes to the summit don’t require crampons or ice picks, or any real mountaineering skills – but is more like a very hard trek, spread over eight days on the route we took. Apart from cold (with wind chill, temperatures near the summit can be as low as -20 centigrade) and exhaustion, the main danger is altitude sickness, which in severe cases can be fatal if the sufferer isn’t quickly brought down to lower altitude and treated. Our route was partly chosen to minimise the risk of altitude sickness by allowing more time for acclimatisation, with ‘climb high, sleep low’ being the order of the day.

“In March 2020, as we all know, the world changed with the arrival of the Covid pandemic. In October that year I took part in a training weekend in Snowdonia with some of the others who’d signed up, but it was already becoming clear that the big climb wouldn’t be able to go ahead the following March. Sure enough, before Christmas we heard that the date had been put back to October. Oh well, more time for training …

“By the following summer it was decided that October was also likely to be premature given the ongoing restrictions on travel, and the date was pushed back to March 2022. Unfortunately this date wasn’t possible for some of the group, and so there was a third postponement, to July of this year.

“This did allow for another weekend in Snowdon at the end of May, but apart from that the nearest I got to altitude training for the climb was on the North Downs in Kent, where I spent most free weekends hiking. By July I was definitely in the best shape I’d been in for years, but still had many doubts about the wisdom of what I was attempting at the age of 62. However, having already extorted donations from numerous family and friends on my JustGiving page, I couldn’t back out now!

“Vaccinations and visas arranged, I met up with the other six in our group at Heathrow on July 20th for the flight to Kilimanjaro via Nairobi. We arrived at our hotel, a safari lodge outside Moshi, around lunchtime the next day, and early the following morning set off by coach for the ‘Lemosho Gate’ where our climb was due to start. After some bureaucratic delays we got going early in the afternoon, initially trekking through the rain forest that covers the lower slopes of the mountain.

“The first four days brought 5-7 hours of reasonably hard trekking each day, but nothing too far outside our comfort zone. Day five, however, started with an ascent of the ‘Barranco Wall’ – I figured that anything so named was going to be challenging, and so it proved. This was the closest we came to ‘technical’ climbing, with our guides at some points having to advise on hand and foot positions as we worked our way up.

“The real test when climbing Kilimanjaro comes with summit night. After a shorter than usual trek to our final camp on day six we had an early dinner, then tried to get some sleep for a few hours before being woken at 11 for a final briefing over tea and biscuits, before setting off for the summit at midnight. This entailed a 7-hour climb through the night, in temperatures of around -10 degrees – luckily there wasn’t much wind! Already pretty exhausted from the past six days, this was undoubtedly the hardest thing I’ve ever done – but then dawn broke as we reached the rim of the summit crater, and as we made our weary way around the rim to Uhuru Peak we had the magnificent sight of the sun rising over the summit and the glaciers. Suddenly it all seemed worthwhile …

“After a brief stop for photos by the sign at the peak we set off back to camp, which took another three hours over loose scree – very hard on the knees! After a couple of hours’ rest and lunch, we then had a further 3-hour trek to our final overnight camp on the mountain. The following day brought a fast 5-hour descent to the finish – and a very welcome bottle of Kilimanjaro beer!

“I have to thank all the family and friends who encouraged and supported me towards this goal over the past three years, through all the Covid-related postponements, training injuries, and moments of doubt about whether I’d bitten off more than I could chew. I couldn’t have done it without them. Huge thanks also to everyone who’s supported the climb with a donation to Alzheimers Research UK via my JustGiving page. It’s an immensely important and worthwhile cause, and every donation really does make a difference.

“In case anyone would still like to donate, the page will remain open for another couple of weeks, until the 10th of October. It’s at https://www.justgiving.com/fundraising/omahonys-on-tour.”