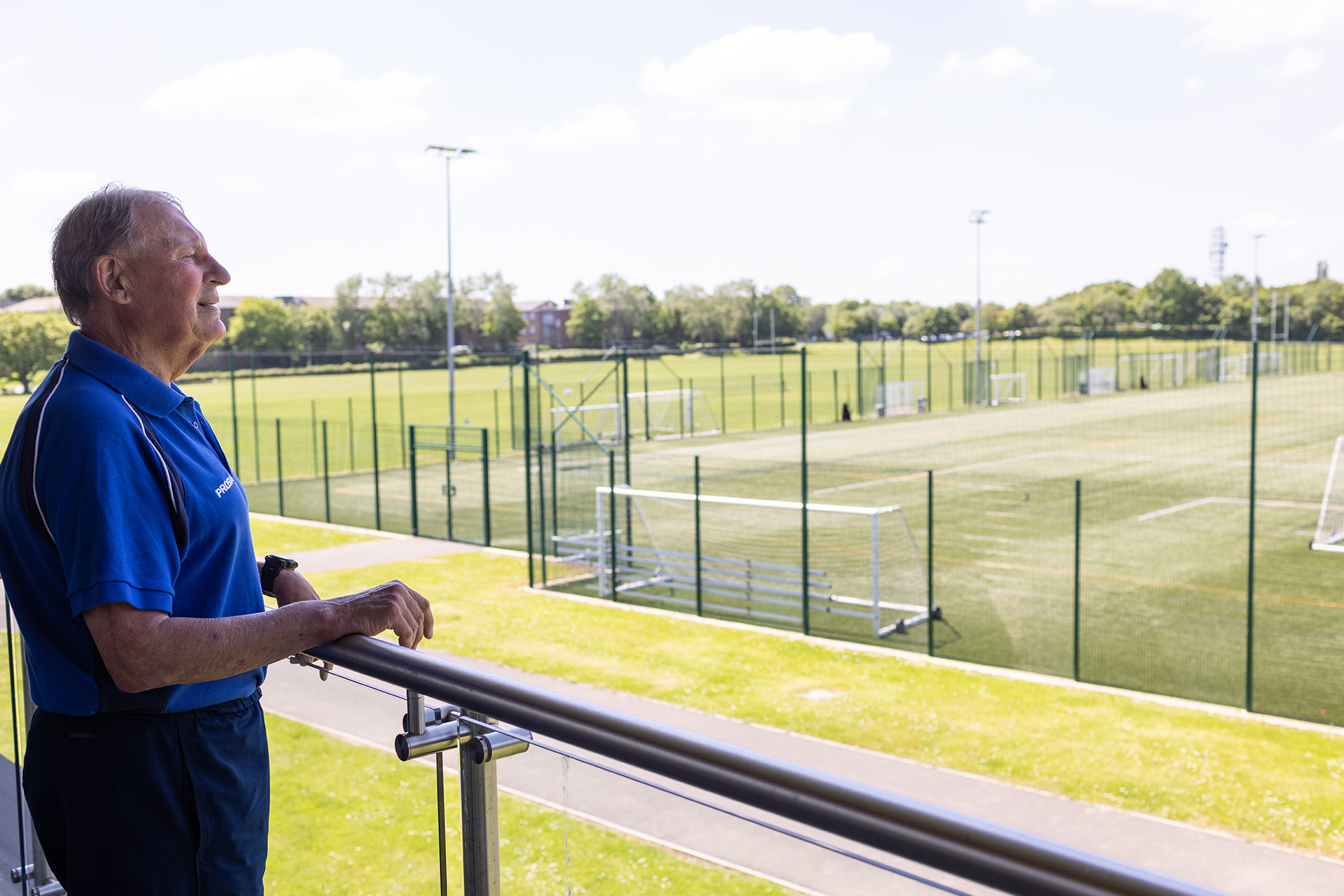 All institutions have great characters. People who make the difference. Who inspire, nurture and bring the best out of everyone around them. People that you remember fondly for the rest of your life. Well, if you ask anyone even vaguely sporty that was at Kent between 1971 and 2007 who their favourite member of staff was, as like as not, they’ll say Director of Sport Mike Wilkins.

Mike Wilkins MBE grew up in Leeds with a passion for football, rugby league and cricket. His sporting break arose when he was 17, while he was working as a butcher. He signed pro for Bradford City and scored 29 goals in his first 31 games. But Mike sustained a serious knee injury – ending his professional career at the tender age of 19.

But football was in Mike’s blood and he wasn’t going to give up. He fought his way back to fitness playing non-league, but during a spell with Canterbury City his knee injury finally caught up with him. And at 28 years of age he was forced to stop playing the game he loved.

Never one to give up Mike quickly began gaining a reputation as a coach with local teams. While working with Brett Sports he decided to visit the University of Kent and ask the Director of Sport, George Popplewell, if he could train the team there. His 36 year love affair with Kent had begun.

“In 1971 the University advertised a job for a part time Sports Hall Assistant. I applied for it and George Popplewell and his wife Elaine, who was Assistant director, were magnificent for me. They gave me an opportunity, considering I was a butcher with an injured knee. They gave me a career.”

The same year he was asked to coach the first team.

Mike rose quickly through the University ranks and after holding the positions of Senior Sports Hall Assistant (1978) and Assistant Director (1984), he became Director of Sport in 1992 – and played a pivotal role in developing the sports facilities at the University and thanks to his expertise and enthusiasm, Kent became the first university in England to have a synthetic pitch.

“I started at the bottom with little education. Mr Popplewell encouraged me to do all my coaching courses and I found that because my education was so poor, I struggled to do the theory papers. I went back to night school to do two O’Levels, in English and Sociology, as well as working full time. Then I did a diploma in Recreational Management followed by a six- year part time degree, achieving a BA in Social Science. In all I spent ten years studying, but throughout I never stopped running the football club. It was hard work.”

Mike led the University football team to 30 trophies in his 27 years and helped the team reach three BUCS finals in 7 years (1979, 1984 and 1986). For Kent to reach three national finals was a major achievement.

Mike retired from his post as Director of Sport in 2007. On the day he left the university received some amazing news. Thanks to a bid Mike had submitted Kent had been awarded £897, 000 by the Football Foundation – one of highest grants ever given at the time!

Mike’s remarkable legacy continues at the University to this day in the form of the ever-popular football reunion he hosts every year. This year it is taking place on Saturday 11 September. This event is open to any Kent alumni who played football for fun or for the University football teams, as well as their family members. It’s fun, informal and a wonderful chance to come back to Kent and enjoy a reunion with teammates.

The football is a competitive kick-about suitable for all ages and abilities. We then retire to Keynes Bar. There is ample seating in-door and out. Mike will then present his football PowerPoint for the aficionados among you. Followed by dinner in the delightful surroundings of adjacent Dolche Vita. You can choose from the menu and pay for your food on the day.

The event is free and you can register online here!