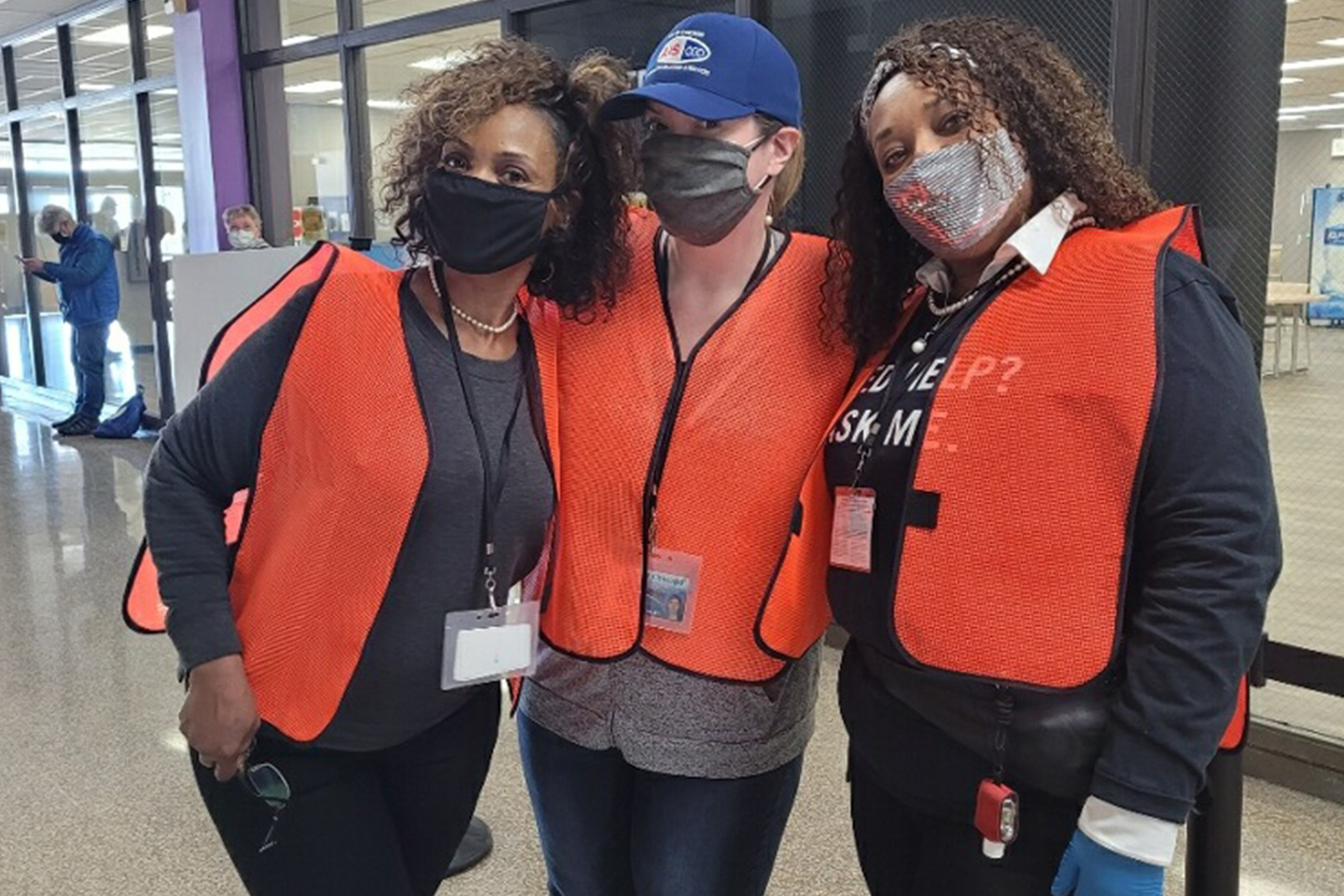 Alumna and University of Kent in America board member, Jaime Blakesley (Eliot, 2000), tells the story of how she became a volunteer vaccinator in her city, Chicago.

On December 15, 2020 Phase 1A of the City’s vaccination plan began. This included long-term care and other residential healthcare facilities and healthcare workers, most being vaccinated in January.

At this time there was a call out to all departments within the City for volunteers to work “on loan” from their regular duties to assist with the vaccination plan. Volunteers are from a wide range of City departments and sister agencies as well as non-for profit health and community organizations. It is a real citywide team effort organized by the Chicago Department of Public Health.

Over the December holidays volunteers were trained, Point of Distribution sites (PODs) were setup, logistics and other important details were put into place. By mid January six PODs located within currently unoccupied City College buildings were in operation five days a week.

Patient flow is in one direction to eliminate cross contamination. Volunteers take on various roles at each site and are trained to be as versatile as possible for tasks that are non-clinical such as registration and observation post-vaccination (all the vaccinations themselves are administered by nurses, paramedics, or clinical staff), for 8 hour shifts. Everyone is devoted to the mission of vaccinating as many clients as possible. I have been working on average two days a week at the clinics since January and have enjoyed meeting and assisting the healthcare and essential workers, senior citizens, and the members of the public that have come to the vaccination sites to date. It’s also been a fun change of pace from my regular duties as an environmental scientist and I have enjoyed getting to know my fellow volunteers from other sectors of City departments; from librarians to public planners to accountants.

As of March 3rd, the PODs had administered over 562,000 vaccines. I originally agreed to volunteer for 6 months or until needed. So many of us felt helpless during this pandemic that I was keen to accept an opportunity to contribute towards the effort to end it. I’m proud to have a small part in helping my colleagues, friends, and neighbours gain access to this vital vaccine and look forward to a return to some semblance of normalcy again soon.

Since then I have started work as the POD Coordinator at the United Center federal vaccine clinic location a couple days a week. The United Center site is one of four identical ones being helped by the Army in support of the Federal Emergency Management Agency. The 101st Airborne Division is part of a 222-Soldier team, helping to administer close to 6,000 vaccines per day at the center for what was originally planned to be eight weeks; but was extended a few weeks longer. It is coming to a close next week.

I represent the City of Chicago as the POD Coordinator for the combined interagency effort with federal, state, and local government agencies on-site. Most of my daily tasks are assisting clients with appointments and checking them in before sending them through to the medics for their vaccination and also train and supervise volunteers. More than 289,000 shots have been administered at the United Center site. It’s been an honour to collaborate with everyone there, a true team effort.