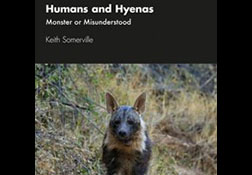 Professor Keith Somerville is a member of the Durrell Institute of Conservation at the University of Kent and teaches at the Centre for Journalism, and a fellow of the Zoological Society of London. He has written books on the ivory trade in Africa, human-lion conflict and his latest book, Humans and Hyenas: Monsters or Misrepresented, is published on 19  March 2021.

In films like The Lion King  and Mowglie Legend of the Jungle and even in repitable wildlife documentaries such as the BBC’s hugely successful Dynasties series, the representation of hyenas is of skulking scavengers harassing other predators or vicious, cruel hunters in huge packs who tear their prey apart before it is dead. In  documentaries  carefully chosen sensational images will be highlighted of hyenas dismembering prey or mobbing lions or wild dogs. These are the images that most people have of hyenas because of their representation in films, documentaries and the media.

When you add to these the abiding myths about hyenas – that they are the creatures of the occult, grave robbers and even that they are perverse sex-shifting hermaphrodites – you get the lasting image, thousands of years old, of a filthy, skulking, cowardly, vicious creature that is controlled by evil witches, hangs around graveyards and is a symbol of sexual ambiguity or outright deviance.  The latter myth of sex-shifting or being hermaphrodites comes from the curious genital structure of female spotted hyenas, who appear to have male genitalia.

Such images, especially of the spotted hyena, are supported or added to by the wide range of hyena vocalisations – from growls and snarls through howls to the loud, repeated whoops and almost insane giggling.  Myths from the Middle East and West Asia assert that the striped hyena can imitate people’s voices, luring people and dogs to their deaths at the teeth of the hyena by calling to them in what sounds like human speech.

Fighting the myths with science

The great carnivore scientist Hans Kruuk – who wrote a ground-breaking book on the spotted hyena demonstrating through observation and verifiable date that it hunted more than it scavenged and killed more of its own prey than lions did.  Kruuk’s work began to break down some of the myths about hyenas being cowardly scavengers and unpleasant but uninteresting animals.  His work was continued by carnivore researchers like Laurence Frank, Kay Holekamp, Gus Mills, Glyn Maude and more recently by the University of Kent PhD graduate Mounir Abi-Said,  and by Arjun Dheer and Sarah Edwards.  They’ve highlighted the social complexity, hunting and foraging skills, great intelligence and adaptability of the spotted, striped and brown hyena species.

I’ve benefitted hugely from their work in writing my historically-based examination of human-hyena coexistence and conflict, and the origins and staying power of myths about hyenas.  Published on 19 March this year, Humans and Hyenas Monster or Misunderstood shows how, from the Middle Miocene epoch (15.97 million-11.6 million years ago) through the Pleistocene (2,580,000 to 11,700 years ago,) to the present, hyenas developed alongside the ancestors of modern humans and now coexist with and come into conflict with modern humans, suffering hatred and persecution.

It is time that the myths that persist about hyenas, the inaccurate portrayals of them in many wildlife documentaries as the lowlifes or muggers of the natural world (not to mention the negative portrayals in films like The Lion King and Mowgli Legend of the Jungle) was replaced by a more accurate representation, one that recognises their role in the food-chain, their ecological services and their interesting, complex social relations.