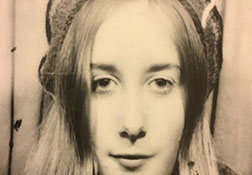 The University were sorry to hear of the passing of Joanna Emily Goddard on 5 November 2020.

Joanna, known to many as Jo-Jo, arrived at UKC in October 1969. She was then aged 17 years and 6 months, the youngest person at UKC. She and I met and started going out a few weeks later in November 1969 and remained together ever since, for 51 years. I was back then in my third year and president of the union.
Jo-Jo started off reading law simply because when she was interviewed she was still only 16 and that was one of the few courses she could apply for at such a young age. Her tutor was Harry Bloom. However law was certainly not her thing and within a few weeks she asked to switch to English which she was allowed to do at the end of her first year. Whist Harry was speaking to the Dean of Humanities about the proposed switch Jo-Jo read her UCCA form and in the section giving reasons for offering her a place the interviewer had written just four words “..has a lovely smile.” That was echoed in the hundreds of cards and letters the family received after Jo-Jo died.
Jo-Jo was probably the most widely read student I had come across at UKC, but attending lectures and tutorials was not her strong suit and she could quite happily go through most of a term attending very few. She was originally in Keynes and then Darwin. We lived in flats in Canterbury at 110 Whitstable Road and 44 Old Dover Road, plus a wonderful term at Tamarisk House on the sea front in Herne Bay.
After graduating Jo-Jo opened her own restaurant in Bath, greatly modelled on Quines Diner in Canterbury. It was a tremendous success and Jo-Jo retained those Bath premises all her life.
We had four children who were the absolute centre of her life. We kept up with many wonderful friends from those student days continuously.
Sadly she was diagnosed with a terminal illness at the beginning of the Covid crisis and that impacted on her subsequent treatment. She died here in Wiltshire, where she had been brought up, on 5th November 2020. Her funeral could only be attended by 30 people although many, including UKC alumni, lined the village street to pay their respects to such a popular person. Happily Richard de Friend, a fellow student at UKC back in the 1960’s and then lecturer at Kent, ironically in law, was one of the 30 at Jo-Jo’s funeral and he gave an address in which he described her as “….quite simply, the loveliest person I have ever met. “ He was so right. She was truly beautiful in every sense.
The views expressed in this blog are not necessarily those of the University of Kent. More about Kent blogs and blogging guidelines. Report concern