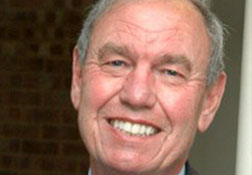 Can you tell us about the experiences you have had with the University of Kent?

My experiences at Kent gave me the skills and I have used for the whole of my life. The University’s research focus allowed me time to be awarded major grants that produced more than twenty books some of which have been translated into Chinese and many other languages. Generous research time also lead to publications in international academic journals. I have also enjoyed visiting professorships at six universities including London Business School, Stockholm University and exotically, University of the South Pacific

The academic reputation I acquired encouraged the Economic and Social Research Council in 1999 to propose to the Cabinet Office that I write a scenario of Britain for the year 2010. This widely publicised Report, featured as a New Year’s Eve special on Channel 4 and across all of the broadsheet newspapers was then published as a book, Britain in 2010: the New Business Landscape. It was the fourth best-selling business book in the UK in 2000. It was featured as whole-page spreads in the Times, Guardian and Daily Telegraph and many of the more popular press.

I was voted by Personnel Today in 2001 as one of the Top Ten Influential thinkers in the UK.

This led to appointment to three Government’s Foresight Panels- Future Consumer and Retail Trends; Leisure and Learning; and the Ageing Population. I also gave evidence to All-Party Parliamentary Groups on Housing Care as well as on issues of health wellbeing and long working hours. The latter became a single- feature Panorama TV programme.

I was also commissioned to prepare major research reports for the European Commission, UN (Wider Project), the Housing Federation (the representative body of housing associations) and the ICAEW (Institute of Chartered Accounts of England and Wales).

This led to being invited to giving Keynote Speeches on economic, social and technological trends to governments and professional bodies across the globe. These include Keynote Speeches at a CBI Summit, Parliament and MI5. Other organisations include Society of Editors, the DTI, the National Audit Office, Institute of Directors, the BBC, HM Customs and Revenue and many others. In total, more than 1,000 over a twenty-year period. The biggest was to 10,000 delegates in Argentina and the ‘quickest’, were frequent half-day trips to Shanghai as well as a day trip to Australia. Because of only ‘carry-on luggage’ I was double checked for security at the Heathrow airport!

I have presented at most of the major event auditoriums including the Royal Opera House, the ICC in Birmingham, Harrogate International Conference Centre, Central Hall Westminster and major venues in Europe, Africa and the United states, including the Royal Palace Stockholm and the Royal Opera House Gothenburg. A talk at the Eden Rock Hotel in Miami Beach put me on the stage on which Frank Sinatra, Sammy Davis, Dean Martin had appeared.

I have shared speaker platforms with Madelaine Albright, former US Foreign Secretary of State; Jack Welch former CEO of the largest corporation in the world (General Electric); David Cameron; Michael Portillo and many TV personalities.

It goes without saying that all this ‘spin-off’ came from my academic work and would not have been possible without the research time offered me by the University. It also greatly enhanced the global brand of the University because its ‘name’ was brought to the attention of political, professional and business leaders.

All of this did not neglect my duties as a Kent academic. These included external examining at ten universities, appraising three university departments and being on the committee of the British Sociological Association. In addition, at various times, sitting on the editorial boards of eight academic journals.

Within the University, I have been a departmental head for two periods of time, member of Senate and among other things, sat on the University’s salaries and promotion committee for more than ten years. As Interim Director I changed the name of the business school from Canterbury to Kent Business School.

Alongside these activities, I have always kept my engagement with the local community. In 1985 I set up Invicta Radio that now broadcasts as Heart Kent. I persuaded the University to invest £50,000 which it then sold for £1 million five years later- not a bad profit and I invite other academics to beat that!

As a benefactor to the University I have been a major contributor by setting up the Richard Scase Music Fund that to this day financially supports the University’s ‘Big Band’.

Locally, I have been writing a regular masthead column for the Kent Messenger Group for more than twenty years. I am regular studio guest on BBC Radio Kent and support the University’s part-funded TV station KMTV as a frequent ‘couch’ guest. Also an occasional contributor to BBC South-East and Meridian TV. In the past it was often Radio 4 and Five Live.

I sit on the Board of BID (Business Improvement District) that is supported by local traders to improve Canterbury as a shopping and visitor destination.

So why the Canterbury Society?

I helped to set it up in 2009 and became Chair last January. Like most academics, I always found being an academic psychologically and emotionally absorbing. To stop being a full-time academic can lead to a ‘loss of self’ and even loneliness because of the absence of colleague networks. To avoid this I still give lectures including Oxford University.

This is where the Canterbury Society fits in. Many of our members are former academics and find the Society stimulating because of the broad range of activities we offer and the projects in which we are involved. These range from environmental issues through to protecting our local heritage. More details of these can be found on our website www.canterburysociety.org.uk. All are very welcome to join us. You are simply three clicks away from joining a vibrant and fast- growing civic society.