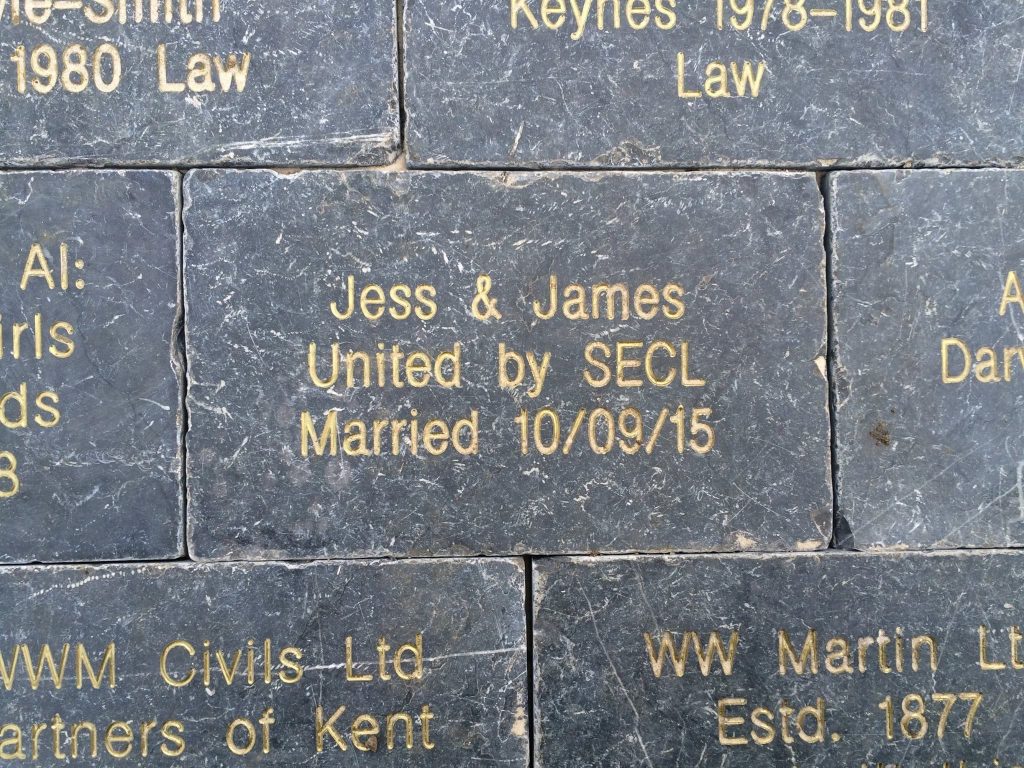 ​What is your Kent story?

I am an alumna of Kent, having graduated in 2008 after studying Classical & Archaeological Studies and Comparative Literature in the School of European Culture and Languages. During my time as a student I worked on the alumni telephone campaign, in the Eliot staff room, Rutherford dining hall and in Mungos and then a couple of years after graduating I returned to a job in the Templeman library. A temp job brought me back to SECL in 2012 where I found a permanent position and I currently work as the Senior Programme Co-ordinator for the two subjects I studied whilst I was a student. On my first day as a temp I met a shy, thoughtful boy working in the finance section of SECL and long story short, I married him.

Why did you get a brick?

James and I were married on 10th September 2015 at Lake Garda in Italy. Our brick was a complete surprise and was given to us as a wedding gift by the administrative team in SECL who I am lucky enough to consider not only colleagues but friends. They knew I was an alumna and that Kent (and SECL specifically) had shaped an enormous part of who I was, as well as bringing James and I together. I was touched by their kindness and thoughtfulness and will be forever grateful for now being part of the Kent landscape.

What is your favourite Kent memory?

This is a very difficult question but I think the sense of community I felt within my department amongst both students and teachers would be the part that stayed with me. I don’t think anyone should underestimate how crucial it is to have the support of one’s peers and mentors through difficult times.

I am fortunate enough to still be a part of Kent and involved in that community even now – I am still making memories most recently as part of the University of Kent Players where I am having a fantastic time and making lifelong friends.