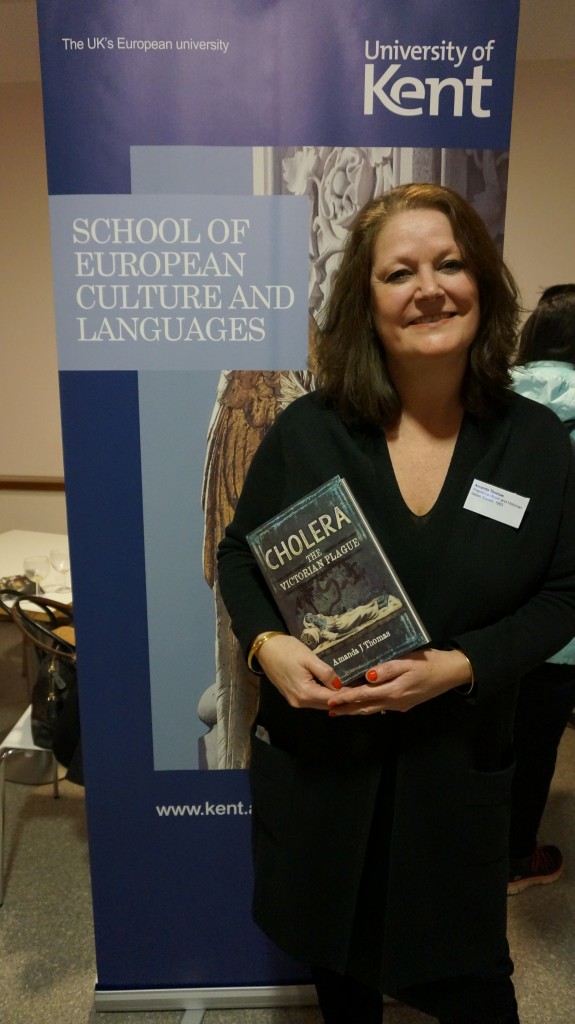 Following on from their ‘Working in Publishing’ Humanities for Hire event, the School of European Culture and Languages (SECL) have a copy of Amanda Thomas’ recent book Cholera: The Victorian Plague (Pen and Sword Books, 2015) to give away.

Amanda Thomas is a SECL alumna, graduating in Italian. Her diverse career has seen her work in journalism, and public relations for television companies including The Walt Disney Company and Television New Zealand. She is currently an author, historian and linguist.

Cholera: The Victorian Plague tells the story of the disease that devastated the Victorian population, and brought about major changes in sanitation. Drawing on the latest scientific research and a wealth of archival material, Amanda uses first-hand accounts, blending personal stories with an overview of the history of the disease and its devastating after-effects on British society. The book reveals that Victorian theories about the disease were often closer to the truth than we might assume.

To win a copy of the book, signed by Amanda, you will need to answer the following question: in what country is cholera thought to have originated?

The deadline for entry is Friday 8 April 2016. Please email your answer to secl@kent.ac.uk with ‘SECL Publishing Competition’ as the title of the email or message us via Facebook or Twitter.

Approximately 120 students attended the ‘Working in Publishing’ event, which featured Amanda presenting alongside Doctor Who Magazine editorial assistant and English Language & Linguistics alumna Emily Cook, Routledge editorial director Craig Fowlie, and Publishers Association campaigns manager Seonaid Macleod, about their careers in the world of publishing. The event was chaired by Dr Jeremy Scott, Senior Lecturer in English Language & Linguistics, and was followed by a drinks reception in the Gulbenkian.

If you would like to share your story with Kent’s students and alumni, please get in touch.