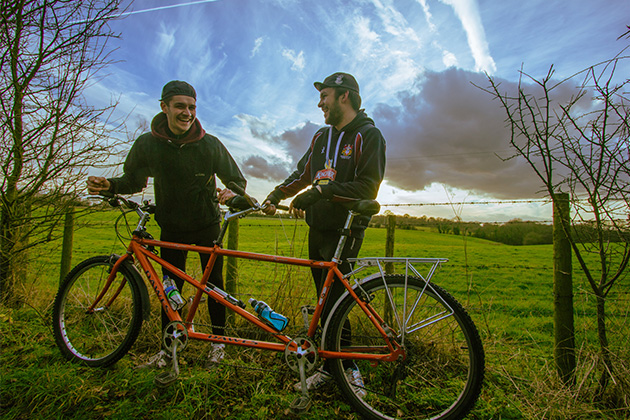 In the Spring of 2016, George Agate (Eliot, 2011) and John Whybrow (Eliot, 2011) will attempt to become the first team to circumnavigate the world by tandem bicycle. Starting in Canterbury, their journey will cover 18,000 miles, and will pass through a pair of antipodes, cross six continents and 30 countries, before finally returning back to where the journey started in Canterbury, with every mile of the ride being unsupported.

The pair thought up the idea whilst at Kent. ‘It started off with watching John Bishop’s Australia, then reading Mark Beaumont’s The Man Who Cycled The World’ explains George. ‘We then googled to see where the world record stood, and when we noticed that no one had completed the challenge by tandem, we decided to give it a bash. The snowball effect took place, powered by a pint or two along the way and here we are, just over six months to go!’
‘We’ve always wanted to travel together and travelling huge distances by human power alone has been something we’ve been interested in for a while now’ adds John.

Having graduated in 2014 with a BSc (Hons) in Physics, George has pursued a variety of work, from labouring on building sites to interning in Kuala Lumpur. ‘I didn’t know what I wanted to do career wise when I left Kent, and I still don’t, but that’s the exciting bit. I think graduates often get brainwashed into the mind-set that University is a stepping-stone towards the elusive graduate scheme and too many intelligent and exciting students fall into that trap. You can make much more of an impact in life if you take the risk and utilise your education’ says George.

John, who graduated in July 2015 with a BA (Hons) in Politics, has been planning and training for the expedition alongside working full-time as a manager at the restaurant he waited at as a student. ‘I love working in such a fast paced environment and so far the experience has been invaluable’ he explains. ‘I’ve always had a passion for food and dining and would love to have my own restaurant one day, this therefore seemed like the most logical way to gain experience within the industry. My degree in politics may not have shaped my career path to this point, but it may well be something that I come back to later in life. The most exciting aspect of life to me is the not-knowing. The prospect of not even knowing what country I’ll be living in in five years’ time is exhilarating to me. ‘

The friends, who were both heavily involved in sport during their time at Kent, believe one of the toughest parts of the challenge will be completing a 90 mile stretch of straight road in South Australia in a day. ‘One day’s cycling on a dead-straight highway, with no deviations or changes of scenery, is really going to test our mental strength and our friendship!’ says George.’ Among the many countries that they will travel through, the pair is most looking forward to visiting Iran and Central America, and to experiencing the culinary delights of the places they visit. ‘I’ll be keeping a diary of every new recipe we discover!’ says John.

As well as achieving the record for becoming the first team to circumnavigate the world on a tandem, George and John also hope to encourage people to get outdoors. ‘If our trip inspires just one person to get outdoors and see the world, I’ll count it as a success’ says John. ‘It’s a journey of discovery, to see how the rest of the world lives and survives.’

The pair is looking forward to the support of the Kent community throughout the trip. ‘We’d love to meet fellow alumni along the way!’ says George. John is also hopeful that they may be able to gain valuable advice from others who have taken on similar challenges ‘We’re always open to a spare hand here or there, so if anyone has any expertise or knowledge that they would like to share with us, please get in touch!’