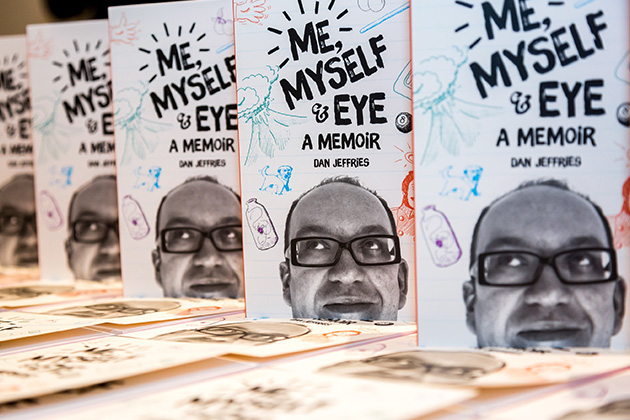 Born with an incredibly rare eye condition and later diagnosed with a life-threatening tumour, Dan Jeffries (Keynes, 1995) has recently published a book about his experiences. Two years in the making, ‘Me, Myself & Eye: A Memoir’ charts Dan’s extraordinary journey from his early diagnosis through to his life as a student at Kent, and is accompanied by an App which includes videos, letters and music which are referred to throughout the memoir, adding an extra dimension to his written words.

In this week’s blog, Dan tells us a little more about his first publication, and what motivated him to write it:

I studied Drama and Theatre Studies at Kent between 1995 and 1999. Nothing particularly special about that, you might think. And you’d be right. But it’s what lies underneath that perhaps makes me a little different from most.

I was born with an incredibly rare medical condition called Wyburn-Mason syndrome. In simple terms, it has enlarged the blood vessels around my left eye and mid-brain, rendering my left-eye completely blind. No sight, no light. Nothing.

Growing up with such a condition was an interesting experience. Sport and physical activity was doable but hard work and it didn’t take long for me to gravitate towards the arts, and drama was where I wanted to be. And so in 1995 I was accepted to study at Kent, specialising in directing in my final year.

A few years after moving back to Bristol following my graduation, I started to feel some changes. I had no energy. I struggled to be creative. And then – through a chance comment made by some final year medical students – I discovered I had another extremely rare condition. And this one was life-threatening.

Three years ago I was telling my story over dinner and at the end of it someone casually remarked, “You should write a book!” and the rest, as they say, is history. I’d written plays and sketches in the past but never a full blown book. And now I’m a published ‘author’, my book went on sale on Monday 12 October, both as paperback and eBook.

With Kent being such a big part of my life, there’s quite a few chapters dedicated to the fine City of Canterbury. I talk about visiting for the first time, discovering Canterbury Rock and buying a record rarer than hen’s teeth, about working at Ricemans and various other locations, about getting arrested for non-payment of TV License fines (Oh the shame!), about my flat burning down and of course about undertaking my degree, the struggle to be creative and then directing my final year plays.

Being the creative type, I wanted to somehow include media that I had collected over the years: video, pictures, music, and – of course – medical documents. But I didn’t want the book to cost a fortune, which happens when you start including pictures. So one night – whilst I was cleaning my teeth (which is when I always seem to have the best ideas) – I thought…why not have an App? While you’re reading the book, why not use your phone or computer to look at the content? And so alongside writing the book I’ve been collating all the content and working with a web designer to produce the accompanying website. Those who work in the book industry tell me it’s a pretty ground-breaking way of telling a story. The eBook version has all the content automatically included and, for me, is a delight to read.

Since graduating from Kent, I’ve primarily been working in music and education, the past few years focusing more on Curriculum and Online Learning. I’m now the Head of Online Learning for a company that specialise in training Vets, so that’s an exciting new challenge. And the skills I learned at university, especially through directing, still help me out to this day: managing projects, managing people, meeting deadlines.

So if you fancy reading a true story about someone with a couple of incredibly rare medical conditions, a skewed sense of humour and some unbelievably unfortunate anecdotes, go and hunt down ‘Me, Myself & Eye: A Memoir‘. I’m also going to be part of a Channel 5 documentary airing early 2016, exploring my various conditions. Clearly there’s an appetite for my rather unique story, one that I feel almost privileged to be able to tell.