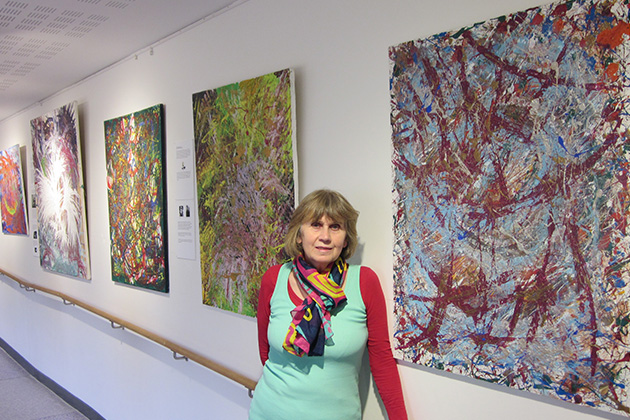 Alumna Inge Harcourt (Eliot, 1986) currently has an exhibition of her artwork at the Gulbenkian, titled ‘RESISTANCE  PROTEST  DEFIANCE’.

The exhibition commemorates and celebrates groups and individuals, some known and famous and others known hardly at all, who offered resistance to the National Socialists during the Third Reich, even in the face of death (1933-1945). ‘The paintings are abstract, but their dynamic character invites personal interpretation and an opportunity to identify emotionally, through free association, with the initiative, commitment and courage of the different groups and persons to whom they are dedicated’ explains Inge, as she describes the exhibition.

Born in Frankfurt/Main, Germany, Inge came to England at the age of 21, where she married and had a daughter and a son. She decided to study Politics & Government and Philosophy at Kent in 1986, once her son had started secondary school. Her degree awoke an interest in human nature, and she decided to continue her studies with an MA in Psychoanalysis in the Humanities in 1989. With a clear career path in mind, she was awarded a Postgraduate Diploma in Psychodynamic Psychotherapy at Kent in 1995, and worked for a year at the University’s counselling service before becoming a Psychotherapist for various organisations.

Several additional courses between 2000 and 2013, which included diplomas in Hypnotherapy, Stress Management and Nutritional Medicine, convinced Inge of the strong mind/body connection, and that simply talking about how one feels regarding life situations might not be enough. ‘I believe that a holistic approach is more helpful for many people, including information on nutrition for the mind, the benefits of exercise, massage, meditation and mindfulness.’ explains Inge.

Inge became inspired to create her first paintings in 2000. ‘My involvement with Hypnotherapy and Reiki Healing and events in my own life brought me deeper personal awareness, which in turn led to spontaneous creativity’ says Inge. ‘It has always fascinated me how some people use art, literature and music as an outlet for their reactions to experiences in their inner and outer world. My paintings are never premeditated or planned on a conscious level, but created with much emotional involvement. There are several layers, and I intuitively know when they are finished. I suppose all of them contain some sort of conflict, but also suggest a resolution. They challenge the imagination to link with the energetic impulses arising from a variety of feelings we all share and into which we can tap, like frustration, sadness, but also hope and triumph.’

Despite having graduated from Kent some time ago, Inge maintains close links to the University. ‘I had a very rewarding time as a mature student at Kent, and made good friends’ she says. ‘Over the last 29 years, I’ve been sharing my house in Canterbury with students, postgraduates and visiting lecturers/professors from Kent. So, being able to have this exhibition at the Gulbenkian is a very important event for me.’

The RESISTANCE PROTEST DEFIANCE exhibition by Inge Harcourt will be at the Gulbenkian until 28 October 2015.