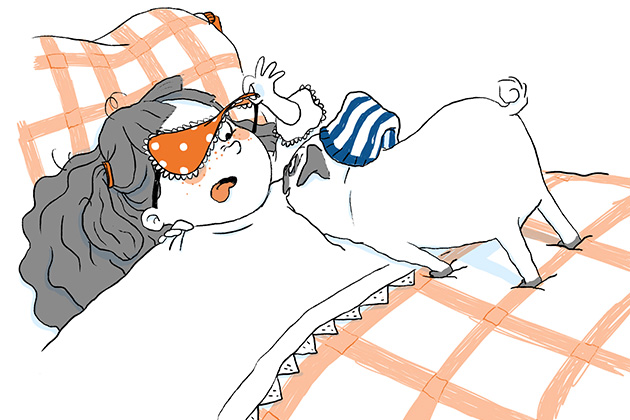 Laura James, who graduated from Kent in 2001 with a BA (Hons) in Film Studies, has recently signed a three book deal with Bloomsbury for her children’s series for 5-7 year olds called The Adventures of Pug. The first book, Captain Pug, will be published in May 2016.

What you have been up to since graduating?
The plan was to work in the film industry and in fact I got my first job as a Locations Runner before our graduation ceremony. The film, called ‘Before You Go’, was directed by the legendary Lewis Gilbert. Shortly afterwards I managed to get some more work as a Trainee AD on ‘Veronica Guerin’, shot in Dublin. This was a promising start but the pressures of paying rent and getting myself up and running meant I fell back on the secretarial diploma I’d gained prior to going to university. When I moved to London my first job was for an estate agent in Mayfair but 18 months later I landed a job working for the Chairman of Celador. Celador was probably best known for the show ‘Who Wants to be a Millionaire?’ and during my time there my boss sold the worldwide rights and UK back library. I started working for the MD of his film company as well and was fortunate enough to work on ‘Slumdog Millionaire’.

Buoyed up from having worked for the creative bods at Celador I handed in my notice feeling sure that I should be doing something more creative myself. Without a real plan I floundered and soon ended up doing more PA work. Two years later I left London, moved back to my parents’ house and got a puppy! This is not conventional career planning, I know, but it turned out to be the catalyst I needed. I started writing and set up as a Virtual Assistant so that I could work from home. A friend told me about the MA in Writing for Young People at Bath Spa University and I signed up and moved to a tiny cottage near Bath. A year after that I got an agent (the brilliant Gill McLay) and a year after that I got my first book deal.

Could you give us some background on the books?
The series, for 5 – 7 year olds, is called ‘The Adventures of Pug’. The first book, ‘Captain Pug’, will be published by Bloomsbury in May next year. Pugs are companion dogs, they’re basically built for friendship and being a proud dog owner myself I’ve always been amazed at the love and patience a dog gives you. Pug’s owner is a headstrong girl called Lady Miranda. She is always having excellent ideas for adventures she and Pug can have. Pug tends to be happiest when either eating or sleeping but because he loves Lady Miranda so much he always tries his best. We’ve been so lucky with our illustrator, Eglantine Ceulemans, whose style is both classic and fresh, and brilliantly humorous.

What inspired you to write them, and what were your motivations for becoming a children’s writer?
I’d always rather grandly said that I wanted to write but I think my time back after London really confirmed for me that I wanted to write for children. I was in quite a retrospective mood, looking back at my childhood and at how important stories have always been to me. Roald Dahl’s books were a huge influence on me when I was little and I think writing something that would make readers laugh became a big motivation.

What advice would you give to other alumni who are thinking of writing a book but aren’t quite sure where to start?
Just start. It sounds obvious but we all get so caught up in trying to be perfect – finding the perfect time, thinking up the perfect idea – that we procrastinate and never actually get anything written. When I first sat down to write I tried NaNoWriMo where you write the first draft of a novel in a month. Mine was about my puppy (Brian) going to Hollywood. It certainly would have had readers laughing but for all the wrong reasons. I completed the task and then hit the delete button. The exercise gave me the habit of writing, however, and it was all part of the learning curve.

The biggest help for me has to have been my MA. The structure, workshopping and career guidance have been invaluable. I know it’s an expense but if you’re serious about writing and can find the right course for you I really recommend it.

What’s the best piece of advice you’ve ever been given?
Write what you know.

What are your future aspirations and where do you see yourself in 10 years?
I’ve signed a three book deal for ‘The Adventures of Pug’ but I hope that things will go well and I’ll be able to write more ‘Pug’ adventures. I think I’d like to write a film script one day too. I’ve always had an ambition to have my name on the pre-credits of a film.

What are your favourite memories of Kent?
Our friendship group at Darwin College was an eclectic one but we stuck together pretty much from day one. We used to walk into town together on Sundays and go to a pub (the name of which I forget) for lunch. That sounds ridiculously civilised for students but it was fun. I wasn’t your average student anyway. In my second year I got a dog and lived on a farm!