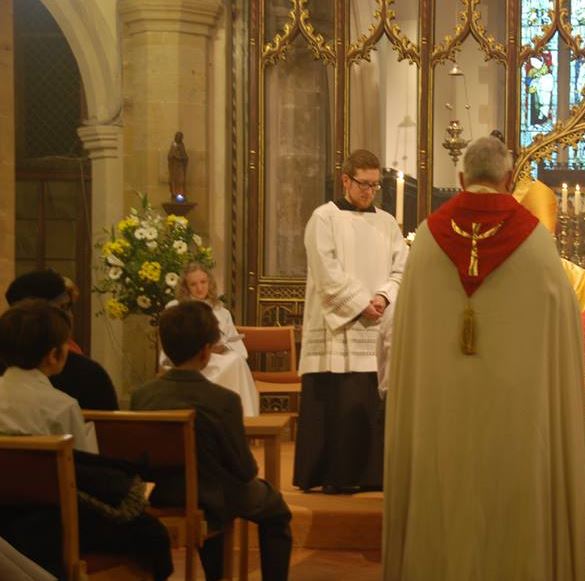 Danny Pegg (Rutherford 2008), who graduated from Kent in 2011 with a BA (Hons) in Comparative Literature and Religious Studies, has recently been recommended to train for the priesthood in the Church of England.

Upon graduating from the University, Danny worked as a background screener for Vero Screening, before becoming a rare book valuer at World of Rare Books.

Having received what he perceived to be the call of God to serve in his Church, Danny became a Christian, and began to work as an Administrative Secretary for the Bishop of Chichester. ‘This job has been very helpful to me, as I did not grow up a Christian and have only been in the faith for a few years’ he says. ‘It’s really allowed me to appreciate the Church from a different level, and learn about its structure from the inside as well as develop skills I will definitely need should I be put in charge of my own parish!’.

Danny discerned his vocation within the Church of England for over a year, regularly meeting up with a priest to discuss the various elements of this vocation, as well as going on placements to different churches.

He recently went before a Bishop’s Advisory Panel, a three-day event comprising interviews and presentations. After a nervous two-week wait, he received the news that he had been recommended by the Bishop to train for priesthood.

‘This means that in October I will be going to Westcott House, Cambridge, to begin a degree and three years of formation, worship together, eating together, all with the aim at the end of it of me being ordained. The training is very full on – a full-time course, taking part in the daily worship, going on placements, and generally developing spiritually. We train residentially meaning all the ordinands live in-college.’

After his training, Danny will begin his curacy for four years, assisting another priest in his church before taking up a post of his own.

Danny fondly remembers his time at Kent, and in particular his course. ‘Comparative Literature and Religious Studies overlapped very well in my interest areas. My dissertation was on Theology and Cinema and I crossed these two in other modules like Science Fiction and such. It was nicely varied and yet specific, and catered perfectly to my interests. Dante one day, Gospel of Luke the next!’.

His aspirations for the next 10 years are to be ordained, and in his first post as a priest after his curacy.