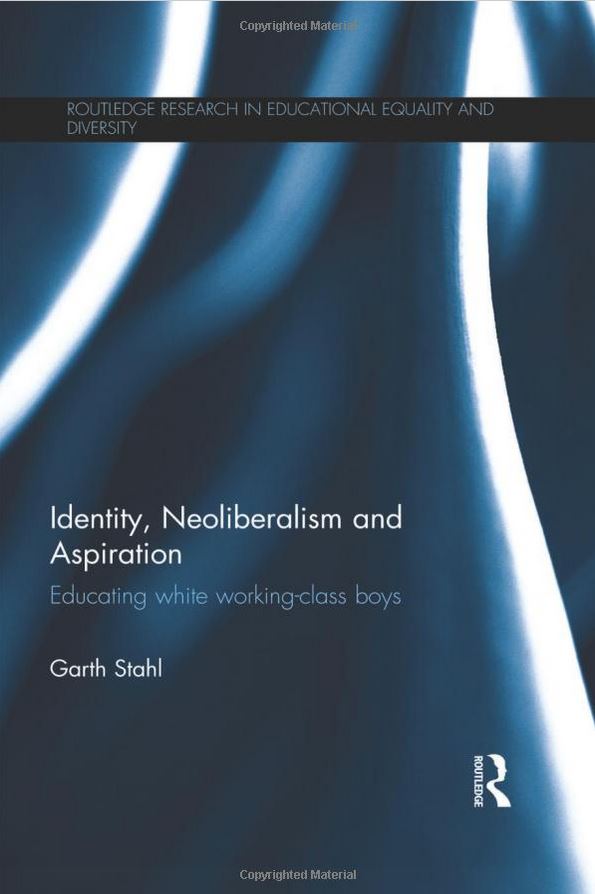 Garth Stahl (Eliot 2001), a Lecturer in Literacy and Sociology at the University of South Australia, has recently published a new book, titled Identity, Neoliberalism and Aspiration: Educating white working-class boys, which will be of interest to individuals in the field of sociology of education, and those from related disciplines studying class and gender.

A theorist of sociology of education, Garth’s research interests lie in the nexus of neoliberalism and socio-cultural studies of education, identity, equity/inequality and social change. He attended the University of Kent in 2001-2002 on his junior year abroad from Indiana University, where he studied for a degree in Second Education and English. During his time at Kent, he undertook volunteer work with at-risk students. The work inspired him to return to the UK to work professionally. His first employment was teaching at a failing school in Essex with a low level of teaching and learning (the school subsequently closed). ‘This experience – which was well beyond the scope of run-of-the-mill urban education challenges – taught me important first-hand lessons about disengagement, cultural deprivation, and the provision of education in British society’ says Garth.

He explains: ‘In the United Kingdom, it is widely documented, both in academic circles and in the popular press, that white working-class children consistently underperform at school. Today this ethnic group is considered to be one of the lowest performing in terms of educational attainment. The persistence of white working-class underachievement was also noted widely in the Office for Standards in Education, Children’s Services and Skills [OFSTED] (2014) annual report for the 2012-2013 academic year, where a poverty of low expectations was linked to ‘stubbornly low outcomes that show little sign of improvement’ (p. 1). Furthermore, the white working-class were portrayed as devoid of aspiration: “white young people have lower educational aspirations than most other ethnic groups” (Department for Children, 2008). As an educational ethnographer, who employs equity-based frameworks to explore the interplay of identity, culture, and schooling, I have a particular interest in these so-called ‘stubborn’ outcomes.’

In his book, Garth seeks to expand the understanding of white working-class disengagement with education, through presenting the findings from an in-depth sociological study exploring the subjectivities of white working-class boys within the neoliberal ideology of the school environment. The chapters discuss how white working-class boys in three educational sites embody social and learner identities, focusing on the practices of ‘meaning-making’ and ‘identity work’ that the boys’ experienced, and the disjunctures and commonalities between them. Considering the white working-class underperformance phenomenon to be highly contextual and symptomatic of larger issues in the UK education system, the central questions are:
What shapes the aspirations of these young men?
How do these young men comprehend their own disadvantage?
How do these boys make sense of expectations surrounding social  mobility?
What factors contribute to them ‘buying into’ education or ‘buying  out’ of education?
How does the system set them up to fail?