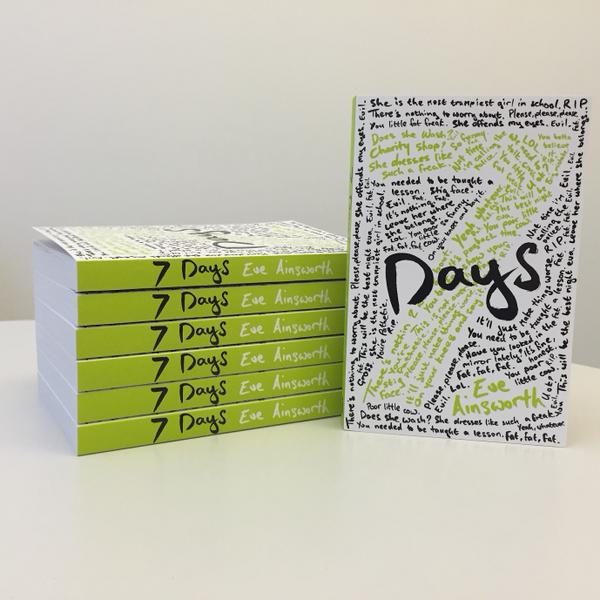 Eve Ainsworth (Eliot 1997), who graduated from Kent with a BA (Hons) in Industrial Relations and Human Resource Management in 2000, has had her first teen novel published by children’s publisher Scholastic, as part of a two-book deal.

7 days is a fictional story about bullying, told from two perspectives; the bully and the victim. ‘I wanted to explore both sides of the story, and open up discussions into bullying’ explains Eve. ‘I also wanted to suggest that in some cases, there is more than one victim.’

Eve was inspired to write the novel whilst working with young people. For several years after graduating from Kent, she worked in recruitment, before switching to HR within the education sector. After the birth of her son, Eve moved to a Pastoral Support position at a local secondary school, and later progressed into Child Protection. It was whilst working at the school that she began to write. ‘Working with teens was my inspiration’ she says. ‘Hearing their voices and their stories. So many had experienced bullying and many experienced pressures from outside of school. In my role, I had to speak to both victims of bullies and the perpetrators themselves. Although 7 Days is completely fictional, working directly with young people helped me to flesh out a realistic and honest story.’

She wrote 7 Days whilst being a mother to two young children and holding down a full-time job. However she soon turned this challenge to her advantage. ‘I found that having restricted time meant I really had to commit myself in the hour that I had available. Every evening, whilst my husband was putting the children to bed, I would make myself write.’

Eve is currently editing her second book, which will be published next year. Her aspirations are to continue writing, and work in as many schools and libraries as she can. ‘I love working with young people and I don’t want to stop’ she says.

She advises anyone thinking of writing a book to read around the genre they are interested in, to really understand how voice and characterisation can work in texts. ‘The next stage is up to you’ says Eve. ‘Many people want to write, but never see it through. If you have an idea, scrawl it down. It can take years to master your own natural voice, so the more you do it, the better you’ll be. Don’t give up.’