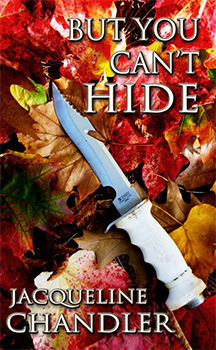 Alumna Jacqueline Kowalczyk (Keynes 1990), who graduated from Kent in 1993, has written two thrillers which are partly set on and around the Canterbury campus.

Published under her maiden name of Chandler, Jacqueline began researching her first novel But You Can’t Hide as a teenager, and the story stayed with her until she began to write 25 years later. Published in 2012, But You Can’t Hide is the tale of a detective on the hunt for a missing girl, and it soon becomes clear he is not the only one searching for her. With brutal killers on his trail, his investigation leads him to Katherine. Convinced she is not the one he is looking for, he desperately tries to protect her from those who seek to harm her. But the killers hold something over him. Something he’ll risk dying for to protect. And if Katherine can’t get away, she may be forced to make the same sacrifice.

Jacqueline began studying Politics and International Relations at Kent in 1990. ‘At this point in my life, I knew writing a book was a dream. It wasn’t what I was actually ever going to be able to do – there are only so many J.K. Rowlings in the world’.

After graduating from Kent, she got onto the graduate fast-track program at a bank, but soon realised it was the wrong job for her and quit. Jacqueline moved to Germany with her boyfriend (now husband)  Arkadiusz (Rutherford 1989), whom she met at Kent, and got a few office jobs but found that nothing motivated her like writing. ‘It wouldn’t be possible for me to not write’ says Jacqueline. ‘I get too much enjoyment out of it. I get to live in a fantasy world of my own creating and can do whatever I want there. Who wouldn’t want that?’.

She began to write But You Can’t Hide earnestly in 2010, and sent it to various publishers two years later, but found many were unwilling to take a risk on an unknown author, and so made the decision to self-publish. Reviews from the book and requests for a sequel prompted her to continue writing, and her second novel, Deadlock, is due out in November.

Jacqueline’s advice to anyone who is thinking of writing a book is to stop hesitating, and start writing: ‘Just do it!’ she says. ‘What are you waiting for? You won’t get an invite – not until people know what you can do. My friends knew I was writing and I would often get asked the polite question “How’s the book coming?” They meant well but I’m not sure they ever really thought I’d finish it.’

She finds that structuring a plan helps her when writing: ‘Some people are “write by the seat of your pants” writers. I’m not. I’m a planner. I like to start off with my characters, I write a few scenes, and then I work on a chapter plan. Gradually the plan gets bigger and bigger, until it becomes the book. You need to know which style suits you best. Neither is more correct than the other. All that’s important is that you put pen to paper’.

But You Can’t Hide is available now. For more information, visit Jacqueline’s website, which was designed by Kent alumnus Jason Parvin (Darwin, 1990).