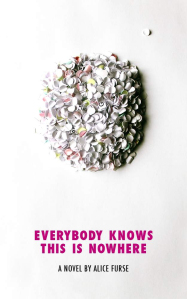 Alice Furse, a Kent graduate who was awarded a BA (Hons) in English Literature and Creative Writing in 2007 and an MA in English in 2010 from the University, has written her first novel, due to be published in October by Burning Eye Books.

Everybody Knows This Is Nowhere, which Alice initially self-published on Amazon, is written from the perspective of a 24 year old woman, who has graduated from university and faces the first challenging years of ‘real’ life. She begins to realise that during job interviews, she is being sized up not for her ability to do the job, but by the likelihood of her getting pregnant soon. She starts working in an office, and notices that a male colleague who graduated at the same time is an Account Manager while she is relegated to making tea and answering the phone, even though she has a better degree than he does. Not only that, but the man she is living with, who seemed so exciting when they first met as students, now appears to have no ambitions for her other than having children and becoming a stay-at-home mum. It slowly dawns on her that the world is not, in fact, laying at her feet, as she was once led to believe.

Alice explains that the book was very much based on her own experiences after she graduated from Kent: “There’s very little you can do about constantly being looked over for jobs, or being asked to do trifling tasks when you do get one. This goes some way to explaining why I wrote the book really, as the whole feminism movement seemed pretty quiet at the time but I strongly felt that sexism was still there, but just happening on a subtler level, which is hard to combat. I felt very alone, and wrote the novel because I was sure I wasn’t the only one to feel that way and I couldn’t find anything like it – I wanted to write something that might make others feel less alone.”

Everybody Knows This is Nowhere was recently listed as a close contender for the Reader’s Choice Guardian First Book Award, and writer Dan Holloway, who describes the book as “a beautifully written exploration of a much underexplored time in life” also interviewed Alice about her motivations for writing the novel, and what her future aspirations are.

Everybody Knows This is Nowhere will be released by Burning Eye Books on 10 October 2014, and is available for pre-order now.