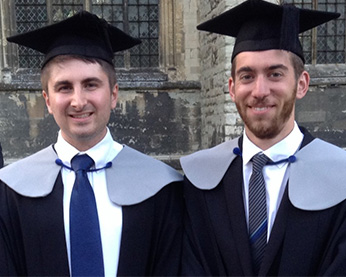 Matt Levett and Chris Detsicas, who both graduated from Kent in July 2014 with a Bachelor of Science (Hons) in Computer Science with a Year in Industry, will be embarking on a three-week trip to Africa as part of the Duke of Edinburgh’s Gold Award programme.

The trip will include an expedition on foot along the coast from South Africa to Mozambique, visiting a school and orphanage, taking part in a game ranger basic skills course and living on one rand per day (equivalent to 5p).

The Duke of Edinburgh’s Award is a charity which enables young people between the ages of 14-24 to develop skills for life and work and to achieve their full potential, irrespective of their personal or financial circumstances.

The programme is composed of four sections: volunteering, physical, skills and expedition. To achieve the Duke of Edinburgh’s Gold Award, a young person must spend 12 months volunteering, a minimum of 6 months on the physical and skills sections, and also take part in an expedition of at least four days and three nights.

Chris and Matt raised money for their expedition by working their way through University, and will also be supported by a contribution from the School of Computing.