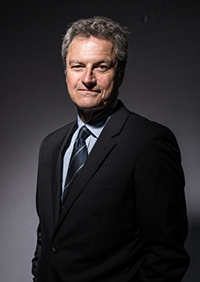 Award-winning journalist, broadcaster and author Gavin Esler has been appointed Chancellor of the University of Kent.

He succeeds Professor Sir Robert Worcester, who has retired from the position after seven years.

He takes office at a time when the University is preparing to celebrate its 50th anniversary.

Born in Glasgow and brought up in Edinburgh and Northern Ireland, Gavin Esler has worked for the BBC since 1977. He was its White House-based Chief North American correspondent between 1989 and 1998 and has more recently been one of the three main presenters on BBC2’s Newsnight and the main presenter on Dateline London (BBC World and BBC News Channel). He is the winner of a Royal Television Society Award and in 2007 a Sony Gold Award for his radio documentary report on Sami al-Hajj, one of the detainees in Guantanamo Bay. Following the broadcast al-Hajj was released from American custody.

Gavin Esler is also a regular newspaper and magazine writer and commentator. As an author, he has written a book on American discontent (The United States of Anger, 1997), a book on leadership (Lessons from the Top: how leaders succeed through telling stories, 2012) and five novels. He is a BAFTA member and a Fellow of the Royal Society of Arts.

The University awarded him an honorary MA in 1995 and an honorary Doctor of Civil Law in 2005.

Kent’s Vice-Chancellor Professor Dame Julia Goodfellow said: ‘I am delighted that Gavin Esler has accepted our invitation to be the sixth Chancellor of the University of Kent. His achievements and international profile make him the perfect choice for the role, and as an alumnus and Honorary graduate he has an important understanding of what the University means to its students and staff, past and present. I am confident he will be an inspiration to all our students and a marvellous ambassador for Kent in its 50th anniversary year and beyond.’

Gavin Esler said: ‘I am delighted and honoured to have become Chancellor of one of our great universities during its 50th anniversary year. I was lucky enough to be the first member of my family to achieve a university degree and my time in Canterbury inspired me greatly. I have a long connection with Kent and Canterbury and I hope to help other young men and women to achieve their ambitions through a wonderful university experience.’