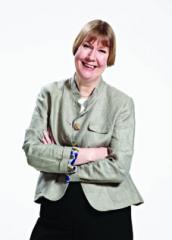 Charlotte became the first female announcer to read the classified football results on BBC Radio Five Live in September 2013. Having read English and American Literature at Kent and been an active member of the student radio society, she joined the BBC after graduating. In 1985, Charlotte became a Radio 4 newsreader for programmes such as Today and The World at One. In 2009, she won the Roberts Radio Special Award for Excellence in Broadcasting and in 2013 the Broadcasting Press Guild’s Radio Broadcaster of the Year Award.

She received an honorary Doctorate in recognition of her contribution to radio broadcasting, at a ceremony at Canterbury Cathedral on Friday 22 November. Listen out for Charlotte’s dulcet tones in our upcoming 50th anniversary film, which will be hosted on our dedicated website. To read more about our 2013 Honorary Graduates please click here.