When I joined the MSc course of Architectural Conservation at the University of Kent, I didn’t know much about British heritage and practice. Driven by my passion for historic sites, I came to discover astonishing architectural styles and historic preservation practices and philosophies. The ‘Conservation Principles’ module confronted me with some tricky questions. Should a historic building be saved partially or totally? Why do we care about its preservation? When was the building destroyed and what has been lost? How should we preserve? I soon realised that answers based only on personal views and culture can be biased… Only by studying the cultural, geographical, socio-economic and political context of a historic building can we really understand its significance and proceed to restoration.

There are different attitudes to conservation. It was fascinating to compare philosophies as different as those of Violet le Duc, John Ruskin, Cesare Brandi, and Camillo Boito, as well as conservation charters such as those of Venice and Athens. In addition to conservation philosophy, the programme introduced us to historical societies, charities, trusts, funding bodies and community involvement regarding heritage. I realised that besides understanding the UK planning system, one should be familiar with the work of amenity societies and funding bodies. After all, successful historic preservation in the UK lies in the combination of a robust legislation with the work of societies such as the Society for the Protection of Ancient Buildings (SPAB) and the Victorian society, organisations such as English Heritage, and funding bodies such as the Heritage Lottery Fund.

After this initial focus on policies, laws and philosophies, it was time for action… I was very excited to hear that the Spring Term module ‘Intervention at Historic Sites’ (January through April) would be delivered in collaboration with the SPAB and would be based on the Society’s ‘Old House Project’, the preservation of St. Andrew’s Chapel, near Maidstone. Alas, I missed the first guided visit to the chapel. Visiting it a few days later with a classmate was one of most exciting moments of the programme. This was a unique chance to experience an unspoiled medieval building, which is very little known. Formerly part of the Cistercian Boxley Abbey, the chapel was converted into a dwelling in the 16th century. Abandoned for decades, the chapel is now in an advanced state of decay, but is not entirely derelict. Some of its features, such as the late-Gothic mullioned window, the Tudor chimneys, the post-dissolution half-timbered extension, and the early 20th-century fireplaces survive and reveal the complex history of the building.

Drawing the chapel, looking at its decay, retracing its history, and reflecting on repair methods was rewarding, and designing a proposal of adaptive reuse added to the pleasure… Here are some samples of my analysis of the decay of the chapel: 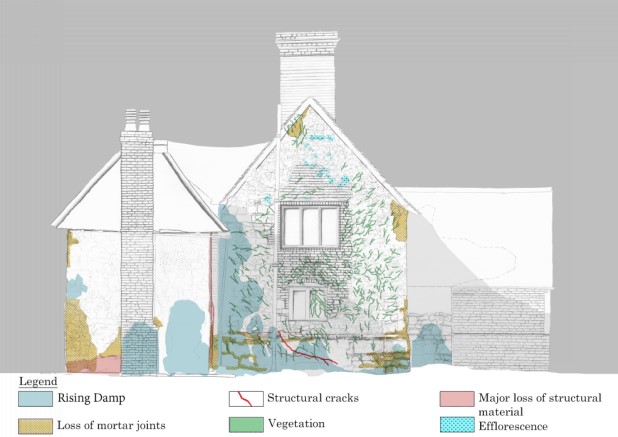 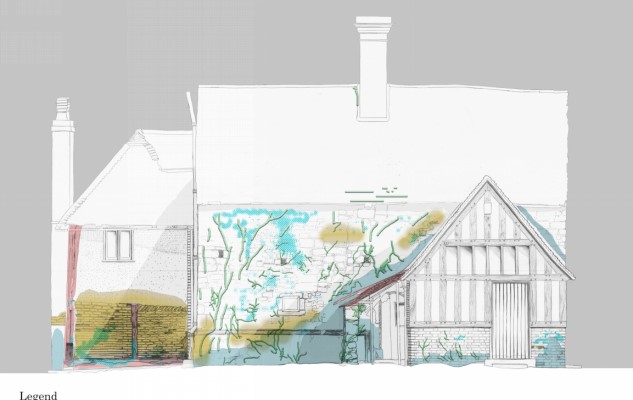 I look forward to visiting the site again, to take a long walk through the narrow pilgrims’ way near All Saint’s Church. I will then follow Boarley Lane from which I can enjoy the scenery around Boxley Abbey’s gate. I will admire the mysterious remains of the Cistercian monastery, particularly its medieval Barn. After another visit of the monastery garden, I will return to Boarley Lane and St Andrew’s Chapel, which lies just before the motorway, waiting for its repair.