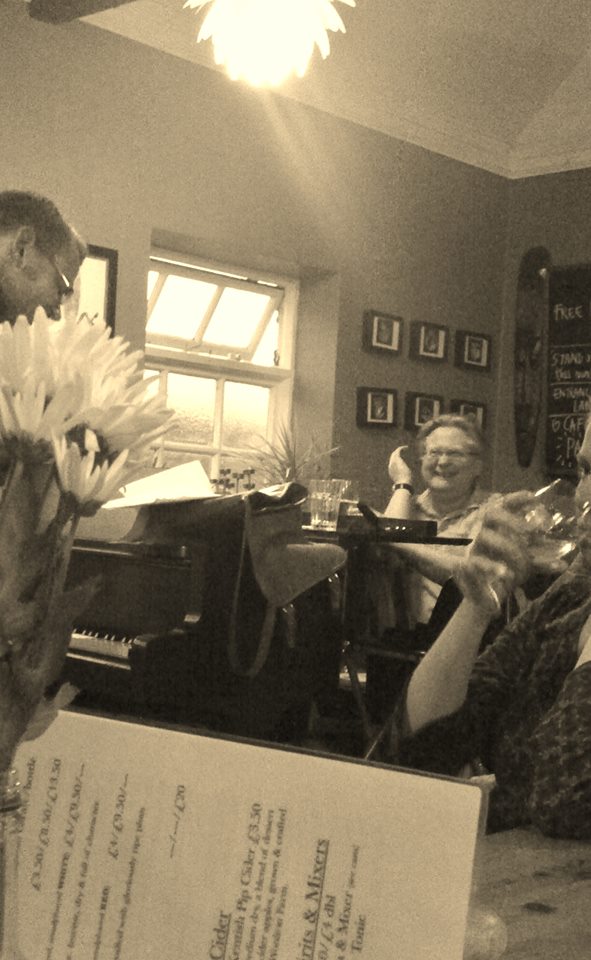 Juha reading behind a flower and Simon Smith really into it.

So, Tony Frazer from Shearsman Books came to give a talk at Kent for one of the Tuesday Reading Series which was awesome. He talked about how he set up Shearsman and offered advice to those interested in starting a similar endeavour. Also, Natalie Bradbeer’s poetry reading was great as always.

Apart from that, what really stood out this week was the ZONE event in the veg box café. ZONE is a Kent-based poetry collective and they organised an event that lasted two days called the San Francisco Renaissance. During the day they had conferences and in the evening there were live performances. The one that stood out for me was Juha Virtanen’s. I think he’s crazy. Before he reads he sits down on the pavement alone and smokes in silence. Then when he performs he’s so so loud and so fast. I’m not sure if the papers he carries have any writing on them because I do not believe anyone can read that fast. Plus, if they were all white A4s, then it would confirm my suspicions about him being absolutely crazy. The fire alarm went off during his reading because someone burnt some toast or something, and there were people going into the kitchen and standing on tables and waving their hands to a machine that simply does not understand human gestures. And Juha kept reading and it was amazing. He got so many claps you couldn’t even hear the alarm. But then we had to leave until it was over.

I also very much enjoyed readings by Simon Smith and Tim Atkins, as well as Natalie Bradbeer’s Lorca translations. Find them all and read them.

Next week it’s the last Tuesday Reading Series event before the summer break. There’s a literary agent from RCW coming to give a talk after a few readings by students.