A change to the line-up of the last Spring Reading Series from a poetry double-bill to – well, a slightly different poetry double-bill, with side dishes. As Jane Monson was unable to join us, Patricia Debney joined forces with fellow Kent poet and tutor Nancy Gaffield, followed by an open mic featuring staff and students.

The premium spots of the evening gave us five minutes apiece of poised, polished poetry

from experienced readers. Debney began, offering a change from her prose poetry (as seen in collections How to be a Dragonfly and, more recently, Littoral) with some works from her ‘newish collection’ Baby. Here were open planes of poems, free verse forms with the odd catch and hook of internal rhyme and assonance. Within each frame, microcosms of emotional relationships and the hovering presences of parental figures. ‘I can’t see your face’, we were warned, ‘it is some kind of horror space’. Seeing and not seeing: vastness and minutiae. The ‘I’ of the poems charted ‘water of biblical proportions’ and the rolling fog that ‘settles into valleys’, obscuring the view through a windscreen. Under the same scrutiny came a litany of material objects, ‘coral, gold pendants needing chains, kaftans’, the stuff of tasteful but empty riches that prove ‘hard to live with’. And as if a piece of trumpery can pass judgement on its wearer, the ‘single eye’ of a silver pearl ring ‘stares right at me…until it closes’.

Gaffield’s recent experiments have been with mathematical poems, employing geometry and the Golden Ratio. Working with the Fibonacci sequence has produced syllabic verse reflecting structure in sound as well as providing ‘attraction of form’ on the page. 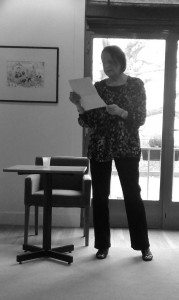 Gaffield has been working on a sequence of these with fellow poet David Herd for performance at the forthcoming ‘Sounds New Poetry’ festival (see below), ‘but I’m saving these’… Instead we were given a poem inspired by Da Vicni’s Vitruvian Man, exploring the ‘harmony of symmetry’, while other pieces expressed and reflected upon sound and form. These were poems full of atmospheric landscapes, plays of light and natural forces. Wild weather and the wilful elements are not to be shifted with ‘soft syllables’ or ‘antiphonal phrases’. Even the laws of language and abstract mathematics are no match for a proper Kentish flood.

After our scheduled readers, MC Ben Hickman opened the floor to those brave / foolish enough to sign up on the door, whether they had planned to or not. The rules were clear – one poem or one page of prose. Offerings could be rough and raw works in progress or finely tuned and edited finished pieces.

There were plenty of takers.

First up was MA creative writing student Jane Summerfield, whose poem ‘Batteries Included’ – relating the exploits of a hormonal slumber party – has been created under the supervision of Gaffield.  Tutor & PhD poet Kat Peddie followed with a two-line poem in honour of the lost word ‘owhere’ (inspired by Gaffield’s recent pamphlet of the same name), committed to memory but jotted down ‘just in case’. Neelam Saredia, a final year CW undergrad, performed a memorised poem ‘Dress Sense’, a dress rehearsal of sorts for the Gulbenkian Poetry Slam (with prompt notes, ditto). In the only prose offering, I slipped in a page from my recently finished novel Eden (thanks for the cheers at this announcement). Tutor Juha Virtanen gave us another paperless piece, a word explosion extracted from a long sound poem, read from the screen of his phone. Geography and otherness peeped through the poems ‘My Friend from China’, read by Edward Greenward, and an extract from Sam O’Hana’s long poem, also written under Gaffield’s supervision. O’Hana was followed by three fellow final year CW undergrads: Tom Cox, who read his prose poem ‘Citizen’s Advice’, featuring cannibalistic chickens and chronic dissatisfaction; Joe Hill, whose joyfully silly and poignant ‘Much Against Everyone’s Advice’ chronicled a life of bad decisions and loss of body parts, and James Richardson, who gamely read a poem of muddy sinking and slippage, fresh from the clay of a recent seminar, which he titled on the spot ‘Already Stuck’. 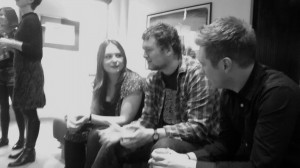 After the readings and the consumption of all remaining wine, the talk and drinking moved downstairs to the Keynes bar, where the evening was balmy enough for us to sit outside and pretend it was already Summer Term.

This may mark the end of the Spring Reading series, but there is plenty more to come. Next term the Centre for Creative Writing will host a series of evenings with publishing professionals and readings from MA students. Many staff (as seen and heard above and elsewhere) will appear at the ‘Sounds New Poetry’ festival in May: for more details see the listings at http://soundsnew.org.uk/sounds-new-poetry . Some of Kent’s dedicated CW students, led by organiser Sam O’Hana (also see above), will be hosting the UK’s first Creative Writing Undergraduate Conference, ‘Vox’. The programme will run during the exciting ‘Full English’ literary festival taking place at Kent this June. Undergraduate creative writers from all universities are encouraged to submit proposals to ‘Vox’: the deadline for abstracts is 15th April 2014. For more details and the call for papers see http://voxconference2014.wordpress.com .

Look out for a last spring blog celebrating our students in print, a final flourish over the Easter vacation…