Keynes SCR: fresh paint, beige carpets begging for red wine spills, standing room only at the back. A suitably salubrious setting for Alan Hollinghurst, ‘one of the guiding sprits of the Creative Writing Department’, whose novels The Line of Beauty and The Stranger’s Child are set texts on Undergrad and MA courses at Kent. 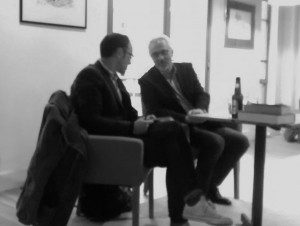 Alex Preston cited Hollinghurst as ‘one of the greatest living prose stylists’, a title that foreshadowed the main point of debate for the evening. Laurence Norfolk famously complained that Hollinghurst ‘doesn’t do plot’. A fair comment? ‘Plot is the thing that interests me least in a book,’ he admitted, ‘but I concede that it has to be done’. In poetry, image and sound are what matter, skills which Hollinghurst, first published as a poet, continues to bring to his prose. Starting a novel is not about sharing a story but ‘establishing the detail, the atmosphere’ from which the book can grow. He begins each novel with a new notebook, ‘and anything germane to that book goes in it…building up a world.’ From there, narrative style and characters grow, and eventually, something of a plot. (Reassurance for those in the audience who struggle with narrative structure.)

This interest in the atmosphere of a book is reflected in Hollinghurst’s literary benchmarks, in the ‘intimate, domestic scale’ of Woolf or Henry James, where chronological elision piques the reader’s interest.  Time passing without extended commentary causes the reader ‘to scramble to work out what has happened’ and to follow the development of character and action more keenly. Hollinghurst also places great emphasis on the pattern of the prose itself, of ‘wanting sound and rhythm in a paragraph to matter’.  Is this his poet’s ear at work? ‘I know when words are not sitting right’, he said, but also admitted that he dreaded ‘poetical novels’. ‘Somehow there is a need for the novel to be more robust.’ While he would love to go back to poetry, ‘it wouldn’t have me’. Aside from his pastiche of Rupert Brooke in The Stranger’s Child – a novel that Preston described as ‘the biography of a poem’, Hollinghurst has been bereft of ‘poem-shaped ideas’ for some time.

Preston praised the authentic feel of The Stranger’s Child, and asked how much research matters, given that we are in a ‘literary culture obsessed with historical authenticity’. ‘Who wants to shed daylight on magic?’ Hollinghurst replied. The ‘act of imagining’ matters more than being able to explain ‘how everything in the room is made’. A shunning of the historical novel that wears its research on its sleeve, but an admission that the writer ‘has got to get things right’. Easy enough in the age of the Google search. ‘The etymology of words is important’ too, not only to ensure credible speech for characters, but perhaps to create that illusive web of atmosphere that holds Hollinghurst’s fictional worlds together.

When his ‘twenty minutes of fawning’ were over, Preston requested a reading of ‘the most beautiful paragraph’ of The Line of Beauty, which closes the first chapter (page 19 in the paperback: read it and see why). Hollinghurst consented, summoning in delicious tenor tones the cloistered communal gardens of Kensington, ‘the dingy glare of the London sky’ fading into ‘weak violet heights’, the cool accomplishment of other people’s lives where Thatcher’s darlings hold al fresco supper parties, the open windows backlit with success. Like Nick, ‘leaning out over the iron railing’, the audience was rapt, ‘swept to the brink of some new promise, a scented vista or vision of the night, and then held there’.

After the readings, questions from the floor about finishing – or even starting – a first novel, the financial implications of writing a long novel, Hollinghurst books as style guides and writing gay sex. And after the applause, the unfurling of audience members from islands of unspoiled carpet, where the dangers of red wine and enthusiastic dialogue were clearly far from over.

Next Wednesday, the School’s own Patricia Debney will be joined by Jane Monson for a final Spring Reading. 2nd April, 6pm in Keynes SCR.

Alan Hollinghurst is the author of five novels, including the 2004 Man Booker winner The Line of Beauty. His latest novel, The Stranger’s Child, was published by Picador in 2011.