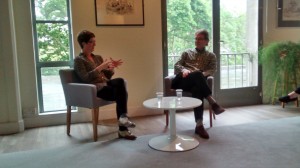 Back to Keynes SCR for two events last week, and a familiar face on both evenings. On Tuesday, Nancy Gaffield launched her stunning new collection of poetry Continental Drift, published by Shearsman Books and sold, hot from the press, by the publisher. On Wednesday, the man who is Shearsman was in the chair himself, the first of the Summer Reading Series industry professionals.

Tony Frazer has spent 30 years in the poetry publishing business, and runs one of the UK’s longest surviving small poetry presses. After an initial foray into magazine publishing, and the inevitable folding of that early venture, Frazer found that the submissions still kept coming. ‘It seemed wrong to send these things back’, so while the steam was up he created a modest publication, printing ‘some 100 copies’ which were ‘passed from hand to hand’. A cult following of sorts was established – ‘a virtuous circle of readers’ – and Frazer sensed there was a market. Publishing poetry was never going to make money, of course (‘I had a job for that’), but it was a hobby that took on increasing significance, and eventually began to pay for itself.

Working abroad seemed to help. ‘I was based in Hong Kong,’ Frazer said, ‘and people would get requests from me and think – who is this guy over there? – and then they would send me poems.’ Rather than being away from the centre of literary activity, Frazer was documenting it, creating it. ‘I asked people for poems and I got them: Roy Fisher, Robert Bly – even Doris Lessing sent me something.’

Publications came and went. Frazer collaborated with friends for a while, but discovered that co-editing wasn’t for him. Rather than producing a magazine that published ’everybody’s second choice’, Frazer decided to go alone, setting up Shearsman in the early 90s, where he could publish what he wanted and practice his preferred ‘benign despotism’. Like most small press offerings of the time, Shearsman Magazine ran as a quarterly pamphlet for several years before the hike in postage costs caused Frazer to rethink. ‘So many presses gave up’, but doing the sums, Frazer realised that Shearsman could continue to produce a biannual book at a lower cost. Chapbooks and occasional collections followed, ‘because people kept sending in good manuscripts’, but Frazer was beginning to run out of money. Then digital publishing changed the face of small publishing. ‘Suddenly there was no need to produce copies which were destined to remain in boxes in the garage.’ No master copy, no typesetting, no minimum print run – print on demand was a financial salvation. ‘Finally Shearsman started making money. It had never happened before!’

Patricia Debney, interviewing Frazer, asked why he kept going. ‘It’s difficult to get off the carousel once you are on it’, he said. ‘I’ll keep going for another eight years or so.’ And then? ‘A long established press is interested in ‘buying’ Shearsman.’

For now, would-be contributors to the Shearsman stable have only one person to please. So what does Frazer look for? ‘It’s hard to say’, he claimed – although it is clear that anyone submitting work should study the guidelines on his website, and stick to the two annual ‘reading windows’ when sending in writing. What about personal taste? Shearsman is known to have experimental leanings, but Frazer considers it ‘a broad church’. It’s about the eye, and the ear. ‘Some stuff comes in that defies all strictures and if it still works, it’s in.’

If those readers brave enough to start the evening were listening, publication surely beckons. Moyra Tourlamain is already set to publish her collection The Book of Hours of Kitty Power with Verisimilitude later this summer (see Kent Review and previous blog for a sneak preview), and she enjoyed a stint of recognition as the Canterbury Poet of the Year in 2010. Less familiar with the travails of public reading, Jan Mowbray delivered a confident rendition from her series of poems produced this year, including some metronomic lines with ticking syllables ‘like a skein of birds’ (and not a single nervous quiver). Ben Porter read from his series ‘Greyhound Gallop’: pacy, racing lines that landed with the quick grace of forepaws on dirt track. Perhaps bravest of all was Claudia Orduz-Landinez, who had read her poems in Spanish before, but never in English. After embracing the teaching of Simon Smith and the realisation that ‘all writing is nonsense’, putting two languages together posed no problem. The resulting poems not only straddled cultures but seemed to envelope them in each other, a double helix of meanings that made absolute sense, and yet none at all.

A high bar has been set for the term.

More words from the wise over the next few weeks: literary agents, publishers and dauntless postgrad readers every Wednesday at 6pm in Keynes SCR. Keep on coming.

Seats and floor space were at a premium in Eliot SCR on Wednesday evening as the centre’s own Simon Smith launched his new collection, 11781 W. Sunset Boulevard.

Patricia Debney introduced Smith. ‘He lives, breathes, reads and writes poetry like no one else I have ever known’, she said, and praised his ‘always evolving poems’, each work seeming to ‘start afresh’.

Smith explained how the book, in two distinct parts, contains poems ‘about transport, rather than transfiguration’. A modest claim typical of Smith, though it was apparent as the evening went on that change and movement in these poems was about more than the mechanics of wheels and engines.

The collection’s title, 11781 W. Sunset Boulevard, is the address of the Getty Institute’s Accommodation in LA, which Smith visited in 2011 when his wife was a Getty Scholar. What first appears to be a rather static title for such a restless collection – a place fixed down by numbers, a point on a map – quickly gathers meaning. This address is more than a destination. It becomes the centre point of a frenzy of writing: 17 poems in 10 days, according to Smith. It is a springboard for departure, back into the poems of Kent and London in the second half of the book. And it is here that Smith spent a day with the archives of poet and translator Paul Blackburn, a catalyst for his current work on Blackburn and an experience explored in the breathless poem ‘11/1/11’.

Smith’s reading began with the first poem in the collection, a response, he said, to his hatred of flying. Written on the plane, ‘Ode: Sat Nav Narrative on Flying into LAX’ builds up details like dabs in a pointillist painting. Here are times, speeds and distances, precisely measured: ‘450 m.p.h. of ground speed dip down at / James Bay distance to LA 2513 miles local / time at present position 12.30p.m.’ Against this catalogue of control the poet’s eyes are ‘gritty-tired, / dogged, filled with the hours bursting / the grit full hours’. A curl of hair acts as a bookmark. The earth curves. Thoughts of home are suspended at 38,000 feet, where ‘everything’s made to look smaller’. Still, but hurtling forward: ‘now / is the moment for change & everything shifts forward next’.

And everything did shift forward. Smith gave us poems of the moment, postcards of fleetingly glimpsed places, impressionistic brushes with found text, street signs, song lyrics, news stations. Smith delivered them baldly, lines running together, taking us from the convoys of ‘muscle cars’ and motorcades past Pacific Coast palm trees and onto the plane home, a ‘long haul long hop deep breath’ of experience. ‘All these things really happened’ Smith explained, making the collection ‘almost like a diary’.

When the plane touched down, we were back in home territory, with part two of the book, ‘Gravesend’. Here was Smith’s ‘A Theory for a Materialist Poetics’, a poem detailing ‘experience crammed in as far as the eye can see’. Smith’s South East is a landscape of train stations, sweet wrappers and Paul Weller lyrics: washing on the line, brambles and railway sidings, a barely concealed threat of malice. ‘We don’t stop at Deptford. No one dare.’ ‘This is Dartford. This is Dartford. Heed the warning.’ Between the PVC and ice-cream van jingles, glimpses of Catullus, Dickens, Henry VIII. And through these detailed despatches recording the ‘ring-pull moment of chance’, the voice of the poet: clear, insightful, and always ‘in pin-sharp form’. 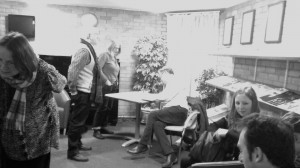 Simon signing books; some familiar faces from the Centre for Creative Writing

There were many questions, not least from poets in the audience. From Smith’s answers, a piece of distilled advice to keep in any writer’s pocket: ‘If you think it’s a poem, it’s probably not. If you think it’s not, it probably is.’

Simon Smith is a senior lecturer in Creative Writing at Kent. His previous poetry collections are Fifteen Exits (Waterloo Press) and Reverdy Road, Mercury and London Bridge (published by Salt). His forthcoming The Books of Catullus will be published by Carcanet.