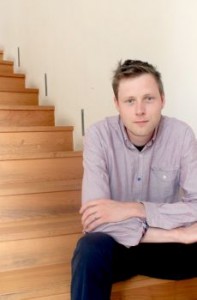 Max Porter is Senior Editor at Granta Books, and a novelist in his own right. Grief is the Thing with Feathers, his first novel, was published by Faber in 2015, and recently won the 2016 Dylan Thomas Prize.

Grief is the Thing with Feathers, Max told us, is structured as a triptych; it’s split into sections for the dad, the boys, and the crow. His first reading was from a section about the dad, and then he jumped around in the book, giving us a sense of all of the different voices.

It hadn’t started out in three sections originally, but he thinks it’s great to do hybrid forms. He loves collage, and he loves the journey, moving between different forms — more than he necessarily loves what the specific forms are. It’s that journey, that hybridity that really gives his book its energy, its shape. He thinks it’s important to acknowledge the pressures on writers — and so this, too, is reflected in the book’s form. It’s fragmentary; much of it was written in emails to himself (“too stingy for Word!”) and he describes the process of finding out how to write it as “adjusting the noise level”. “Not being prose, not being poetry. That was important.”

He’d originally wanted the third main role in the book to be a character from the Odyssey, and to function as a take-down of the happiness industry, but he was obsessed with Ted Hughes, and the crow in his poetry. He saw a big crow in his garden — it landed there and barked at him, like it was an audition. And so in the book he announces himself; that he’s the crow. The crow has held a lot of symbolic weight for thousands of years — all of this adds to it. This intertextuality — both with Hughes, Emily Dickinson, and with a wider tradition through Crow — adds to the hybridity of the novel. It’s not a coincidence that Max describes the tension between the different sections and types of writing in the book as a ‘journey’ — although the book is short, there is a lot of energy there, and depth. The book sparks off against itself.

When writing, he didn’t want to share anything until it was done. He carved out some kind of space when working on it — no internet. A kind of ritual. If in doubt, he draws. He writes in a lot of sketchbooks, doodles on receipts. He’s aware of the dangers of writing under economic imperative, and when he spoke to us he didn’t currently have a new project; he doesn’t want to write just the money. Writing under contract seems frightening — he doesn’t know how to do it. He’s drawing again. Sketches and plots. There are lots of people writing books! And the reception of his first one is making him consider what he wants to do next. He might write a libretto as a way of trying to avoid second book syndrome. It wouldn’t work if he tried to force something; he needs a form/structure, a way of laying it all out that really fits with what he’s writing or he gets confused and throws it all away. But, he says — never destroy your notebooks! He says there’s a danger when writing a debut novel that it’ll be the culmination of all of your life’s work; you need to make sure you don’t use everything up.

He reads about 15 books a week for his job. But he doesn’t publish poetry for work, and so he can read poetry as a way of cleaning out his head. Working in publishing has taught him a lot about the process. But publishing doesn’t have much influence on his writing. He doesn’t think his writers at Granta related to his novel as a threat, or to do with their own work at all. And his manuscript was quite clean — the grammar and spelling were pretty tight. These are the places where the two spheres interact with each other — not with the heart of the work itself. He loved the way the book was typeset at Faber — so deft and insightful. They cared about the little things he wanted to do — very good attention to detail. It’s about the intrusion into a physical space… there needs to be a lot of white space in the book, room for readers to consider this. But there was a point where he had to stop thinking about his own book as a publisher — he had to affect a kind of naïveté, because he didn’t want to be complicit in his own publishing process as someone other than the writer.

There’s a model of writing — where plots and characters are laid out on post-its, with the writer in complete control, a kind of god of the story — that Max distrusts. He tried so hard to create a character who isn’t based on anyone; to make it vivid, he had to know everything about him. He’d speak to him, to find out if he’d be uncomfortable with something. He was tearfully upset about a scene with the boys, and they responded by putting Crow in the oven. There are things like this to do with the writing process that he used to roll his eyes at that he feels now. He’s not a god as a writer — he doesn’t like that idea.

Amy asked if he thought his book was a sign that the publishing world was becoming more accepting of hybridity. He says that he hopes so — and that he also likes to turn the tables and say that it’s 100 years since Ulysses, and it’s weird that in that tie the novel has become solidified as this thing that has so few rough edges. He doesn’t want it to be too hard to read, but he doesn’t want to be too keen to please. He likes exactitude and simplicity — like in the best children’s books. “Really, words form me.” He likes to read Louis Zukovsky and thrillers — reading wildly and without snobbery. In our contemporary algorithmic world, as he describes it, there’s this idea that people read like robots. He doesn’t like it — it’s not how people read. We shouldn’t close ourselves off; art shouldn’t exist only inside discrete categories.