Sunglasses and smart shoes. Clusters of people hovering in Rose Lane, leaning together in twos and threes, conspiratorial. A sentry in the bookshop doorway. Thankfully I knew the password – Kent Review – and was shepherded through silent, darkened aisles to a shrieking escalator that emerged on the top floor. Among the cardboard boxes and squeaky floor tiles of the Staff Only area, a bubble of noise and excitement. And a bar.

If getting to the launch of Kent Review felt a touch noir, the book itself proved even more evasive. After the contributors to the anthology posed for photographs, the evening began with an introduction from the editors. Dragan Todorovich spoke of a recent nightmare which proved horribly prescient: everything in the dream was going well, something beautiful was appearing, and at the last minute, the project he was involved in was cancelled. A phone call from the publishers in the Czech Republic that afternoon confirmed his subconscious suspicions – the copies of Kent Review, which were due to arrive in Canterbury in time for the launch, hadn’t made it onto the ship the night before. ‘We are promoting an invisible book’ Todorovich said, ‘but at least we have proof that it exists from the pages on display’. 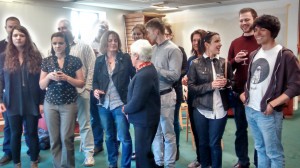 some of the Kent Review 1 writers

Further proof came from the readers for the evening, introduced by Amy Sackville. Kent Review showcases work by current and recent Creative Writing postgrads. Two years in the making, the anthology features pieces by students still living and writing in the Canterbury area, and others who have moved on to work or study further afield. Several were on hand to share their work from the publication.

First to read was Ben Said Scott, whose short story ‘The Station Present’ was written during his studies in Paris, where the piece is set. A bilingual station announcer loses his job but keeps the reality of his situation from his young son, wrapping all communication in the distraction of spoken English. Moyra Tourlamain read extracts from her collection of poems The Book of Hours of Kitty Power, another ‘imaginary book’ featuring the voices of two women, suffused with religious imagery: water-walking, fishes at a picnic, crossed life-lines on a palm. The opening to Stephen Ireland’s novel Fin de Siecle was a joyous, drunken effusion set in mildly feverish pre-Millennium London. Drinking in Soho, a stranger’s number scribbled on a tube ticket, a housemate singing nonsense hymns: this was sharp, energetic prose. ‘What is the colour of your bread, my friend?’ I very much wanted to know the answer.

Caroline Greville’s novel Mantle of Shame was a very different offering. In the departure lounge of an airport, strangers meet and begin the search for a woman’s missing husband. Here were distance, distaste and otherness, and a profuse nosebleed on the descent to Heathrow. Mike Turner read the opening section from his multiple narrative The Warm Way, a cinematic pan across a beach on a day so hot the narrator ‘can hear the grass sweating’. An active, seeking voice, this short extract was full of the stuff of the environment, of dogs in the waves, shop windows, and a mysterious woman with a marked map. Inge Watson opted to have her extract read by ‘someone with a convincing Ulster accent’; her novel Page Ninety-Six dripped with the lard of an Ulster fry, meats jostling on a greasy plate, girls grilling the English newcomer who is clearly ‘in the wrong place’. Following neatly, Wendy Edwards’ humorous take on snobbery, inverted and otherwise, sent up the box-ticking, oyster-shucking middle class mothers of Tunbridge Wells. Despite the light-hearted tone and title – A Chicken Without Batteries – this extract from a novella hinted at potential malice in the scrutinising eyes of the protagonist’s son.

Joe McCarthy broke free of the reader’s podium to deliver an extract of his novel A Miraculous Race to Death. As McCarthy wandered, so his characters were set in motion: a figure glimpsed at a train station, the long bike ride to Aberdeen, blood in the cracked leather of a shoe and the enigma of unexplained anniversary. Christine Newman read the first page of her short story ‘Ticking Away’, a meditation on the isolated information of the text message. A woman prepares for the day ahead, measuring out her progress in beauty products, body weight and breakfast allowance. Hristina Hristova’s novel The Happiness Index continued the theme of contemporary complaints and chronic dissatisfaction, of hiked house prices and ‘organic aspirations’. In a world were happiness can be measured, why should four people in the ‘highest index country’ suddenly become depressed, and tip the scales? 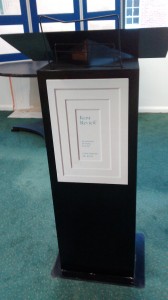 Last to read was Gonzalo Ceron Garcia, who ‘felt like a priest’ at the lectern. Garcia’s extract from Forgetting Silence followed the protagonist on a bus ride with his mother, seeking places and people of the past damaged by the dictatorship in Chile. Here was poignant, humorous prose, full of clarity and detail; the empanada seller and his wares, the perceptions and presumptions of a young boy, gringos taking pictures of horses on the beach, Medusas lining the shore.

After the readings, wine and celebration. Despite the book’s absence, presales were available at the event. If only some of the works in progress were, too.

Kent Review 1, in its material form, is available to purchase from the Centre for Creative Writing and Blackwell’s bookshop on campus, priced £7.99.

The Reading Series will continue with visiting industry speakers and readings from CW postgrads. First up, the inimitable Tony Frazer, founder of Shearsman Books: Wednesday 21st May, 6pm, Keynes SCR.

The new term is swiftly upon us, a summer that will see many Kent Creative Writing projects come to fruition.

The Reading Series will welcome professionals from the publishing industry over the coming weeks. Students will be able to share their work, receive advice and get questions answered. And many of them will already have something in print to share and celebrate.

The Book Project is a hugely popular module with Creative Writing undergraduates at Kent. An intensive course run by Simon Smith, it gets students writing new work with ambitious scope, building up a body of pieces or a novel that acts not only as a portfolio but a finished, saleable product. Students visit the Poetry Library in London and look at artists’ books in the Templeman. After a period of writing, planning and workshops, each student produces a finished book that is printed, glossily bound and ready for sale. A reading and launch is held. Participants get a true taste of the gigging writer’s life: deadlines, jacket designs, nerves, a live audience, applause. Selling and signing books. Exhaustion and elation.

What do they make of the process? I asked Joe Hill, whose experience with publishing his first poetry collection through the project may have given him the live reading bug. He found the module useful and informative. ‘While it’s been great on the creative writing side, it’s been equally useful to know about self-publication and the like.’ There’s a distinct camaraderie to the Book Project too – the students are in this together, facing similar challenges rather than bowing their heads over solitary desks or fire-fighting those editorial deadlines alone. ‘Like so many of the creative writing modules, you really get to know your fellow students well on a personal level.’ And what about the launch itself? ‘The reading was nerve-racking,’ Hill admits, ‘but really gratifying as a book-end (no pun intended) to the module.’

MA students have been getting their teeth into the magazine industry with a module run by Dragan Todorovich. Well versed in this medium, Todorovich has organised his team of students to work to professional industry standards. ‘I have organised the whole process to resemble editorial work in a proper magazine.’ There are five students in the group, each taking a clear role as well as forming the magazine’s editorial board. ‘This approach is working very well’ Todorovich says, with the team steering away from traditional forms of print-on-demand and opting for a magazine in a box.

Box[ed.] is in its final production stages now. As well as writing their own creative pieces during the term, the students have been active in advertising the magazine and seeking submissions, reviewing proposed pieces, working on design and production costs, building an online presence and keeping a journal of the whole experience. Editor-in-Chief, Jane Summerfield, has been keen to keep up the pace. Her task has included a firm grip on editorial meetings – ‘cutting down the chat’ – and reducing over 70 submissions to a final list for publication. The team has met regularly and reported back to Todorovich through weekly seminars, combining editorial with workshops of their own writing. ‘We informed our leader about our progress with the magazine and about the submissions we had,’ Summerfield states. After weeks of planning and work, the project started to come together and seem real. The boxes arrived, ready to be filled with the final selection of new writing. ‘It felt like a proud moment, as if we had all overcome another challenge with the project.’ Choosing the pieces wasn’t easy. ‘The process was heavy, and challenging people’s opinions was a tough action as Editor in Chief. Ultimately I made the call on pieces with a mixed reaction.’ But rejection from the magazine isn’t the end point. Summerfield has made a point of writing to all hopefuls, successful or otherwise, and asking them to keep in touch. The team is working on new projects and there will be further openings for student writers. ‘One of which is the new website, where we hope to have a writer’s spotlight and sub-sections of writing. An online presence is important.’

Find that presence at www.boxedmagazine.com and keep up to date with publication and launch news.

More student work can be found in the new anthology Kent Review. Volume 1 of this biennial series will be launched on May 14th. It’s a book of some 30 selections, showcasing pieces from current and recent Creative Writing postgrads. Amy Sackville, one of the book’s creators, is justly proud. ‘The book itself is looking beautiful, with an elegant, contemporary design befitting the brilliant work within.’ And the work itself? Expect short pieces and extracts from novels in progress on diverse topics, ‘bees, bikes, ghosts, happiness and jazz…short stories that will make you think and leave you moved, unsettled, and possibly disturbed; poetry full of flair and flex, pushing at the boundaries of what text can do, and exploring the spaces left behind and between words.’

Kent Review 1 will be distributed to publishers, agents and the media, highlighting the writers and their potential. Celebrate the launch with staff and students at Waterstones, Rose Lane, Canterbury on 14th May, 6.30pm. The book will be available to buy at £7.99 at the event, from the Centre for Creative Writing and from Blackwell’s bookshop on campus.

See you at a reading soon.