Another packed room for Wednesday’s reading, and a subtle shift in demographic. Alongside students, staff and alumni of the School of English: law students, social scientists and human rights activists. What had they come to witness? The radicalising power of poetry.

As every Creative Writing undergrad at Kent will know, poetry is potentially dangerous. It can expose, persuade, exploit. It makes the reader see the world differently. It can shake things up. Here was an audience keen to see the process at work. In Protest: 150 poems for human rights is a new anthology produced by the University of London’s Human Rights Consortium and Keats House Poets. The evening’s readers were contributors to the anthology, an experiment, according to one of its editors Laila Sumpton, born of modest aspirations. Putting out a call for poems of exile and protest ‘to create a pamphlet’, the editors were overwhelmed by more than 600 poems. The resulting publication was launched in October last year and features work from established and emerging poets. Sumpton explained how the book – divided into themes such as ‘land’, ‘sentenced’ and ‘expression’ – seeks to ‘rethink the frame of human rights poetry’ and ‘find new directions and ways in’ to the subject.

First to read was Alia’ Afif Kawalit, a PhD research student at Kent and tutor in the School of English. An Arab and English speaker, Kawalit’s poem ‘Turning a Blind Eye’ explored the discrepancies between media reports of violent clashes close to her homeland, Jordan.

Sharing a mango with an Indian friend, notions of hospitality are set against the poet’s fears for the future. Imported fruit, like imported journalism, can lose its authentic taste. In ‘Dry Times’, the Arab upheavals (Kawalit shuns the term ‘Arab Spring’, another appropriation) crash into consciousness, where ‘little dreams wake…like whistling bullets’.

These were subtle poems whose power lay in expressive imagery rather than tub-thumping remonstration. Hubert Moore followed with poems of contrast, stating that poetry alone can present unlikely associations to its readers ‘with a straight face’. His poem ‘At the Approach of Dieback’ brought together diseased ash trees and the ‘slippered voice’ of a refugee’s aging parent speaking from afar. Similarly, ‘V Formation’ linked the image of a flock of flying geese with the ‘eleven locked doors’ between the poet ‘and the detainees’.

Kate Adams, an East Kent poet and Kent Refugee Help volunteer, brought personal and professional experiences to the reading. Her poem ‘Five Broken Cameras’, written following the death of a friend and fellow caseworker, set ‘sleet on the streets’ of Britain against ‘blood in the dust’ of Palestine. ‘Maybe the Rain’, another poem drenched in relentless island weather, spoke in broken English to mirror, as Adams put it, ‘the fractured, fragmented world of the refugee experience’.  Speaking directly from this experience was former detainee Ruhul, who Adams first met in the Dover centre. Ruhul shared a single, highly personal work written while in detention. A poem of apology and separation, the poet addressed his children with a string of ‘I’m sorry that’s, a reminder of some of the less publicised consequences of detention.

Last to read was the School’s Professor Caroline Rooney, an arts activist whose self-proclaimed ‘soap-box poems’ presented sharp images of war and protest. These are, said Rooney, ‘poems that won’t stay on the page’. Here were lines which – as dangerous poetry should – climbed in to the audience and slapped them around. We were drily warned that ‘stapling the mouths, not feeding them’ does not make good government. Bombed-out buildings lay open ‘like abstract paintings’. Here were the specifics of attack, the sim cards saved in shoes, the eggs thrown at embassy buildings, the flotilla of aid ships raided en route to Gaza. 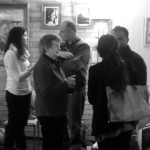 Can poems be a force for social change, a tool for campaigning? Kawalit and Rooney cited the orphic quality of poetry, its authentic voice and its transformative power.  Adams and Moore spoke of raising awareness and reaching those otherwise ‘cold’ to the issues. The debate continued beyond the reading, but Ruhul summed it up: voices shout and journalists create headlines, but ‘a book is always there’.

In Protest: 150 poems for human rights is published by the Institute of Commonwealth Studies.

Next in the series, an eclectic evening with writers Maria McCarthy, Maggie Harris and Maggie Drury. Wednesday 12th February, 6pm.