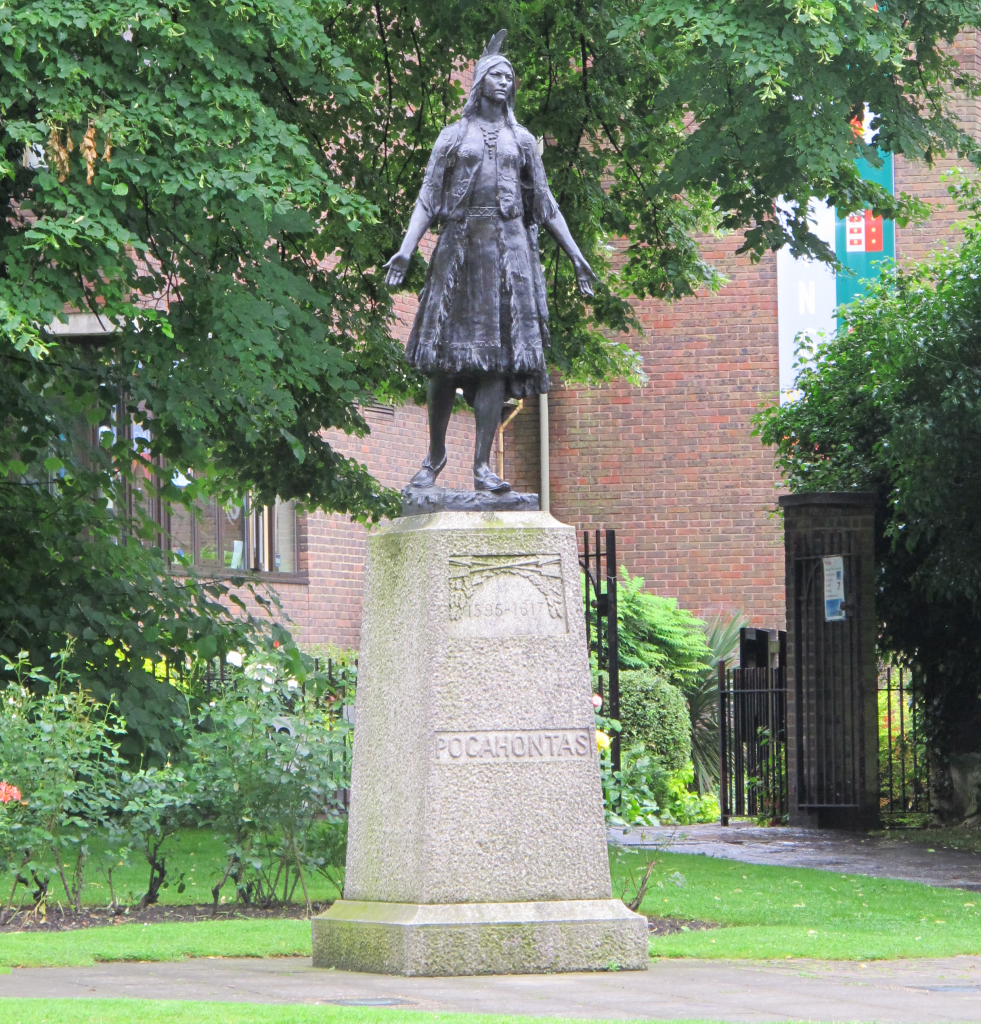 On 16 June 2020, following the toppling of statues to slavers and colonists in the UK and USA, Kent Live published an article about the statue of Matoaka, or “Pocahontas” in the Princess Gardens of St. George’s Church, Gravesend. The article was clumsily headlined “Pocahontas is the woman whose Kent statue probably won’t be coming down any time soon”. https://www.kentlive.news/news/kent-news/pocahontas-woman-whose-kent-statue-4233898. Knowing that he has taken Indigenous summer school students to that site, to reflect on the stories it commemorates and the way it remembers them, we invited our International Co-Investigator, Coll Thrush, to reflect on the memorial.

All around the world, statues are on people’s minds and in the news. From Columbus, conquistadores, and confederates in the United States to a slaver in Bristol, to Rhodes himself at Oxford, recent events have crystallized and intensified longstanding calls to rethink – and perhaps even remove or replace – the monuments of empire and white supremacy.

A few miles downriver from London, in Gravesend, a statue of a young Indigenous North American woman stands in the churchyard of St. George’s Church. Dressed in buckskin and with a feather in her hair, she represents Pocahontas, who died in Gravesend in 1617 on the return voyage to her Powhatan homeland, a place her English contemporaries had rebranded “Virginia.” Known as Rebecca Rolfe to the English and Matoaka to her own people, the Indigenous noblewoman had been a beleaguered celebrity in London, and her presence in England proved a turning point in the fortunes of the troubled Virginia Company, even as her death from an unspecified illness was a tragedy for her family—and, it might be argued, the future of English-Powhatan relations and for Indigenous and settler histories more broadly.

The statue at St. George’s, however, was not erected in 1617. One of the key points made by critics of many commemorative monuments is that we must look to the period in which they were created, rather than the period they purport to represent, to fully understand their meaning. For example, most confederate monuments in the United States were mass-produced and put up for display at the height of Jim Crow in the twentieth century, and most informed commentators see them as part of a larger reign of racial terror that included lynching. In the case of Pocahontas in Gravesend, then, we need to look to 1922, when American sculptor William Ordway Partridge’s bronze figure was first installed in Jamestown, Virginia. Just two years after the statue was erected, the Virginia legislature passed the Racial Integrity Act, enshrining a “one-drop rule” that disenfranchised all Virginians with Indigenous or Black ancestry, with one exception: those descended from Pocahontas were exempt and could remain white in the eyes of the law and enjoy all the privileges that racial status provided. At the same time, Powhatan-descent communities who continued to live in Virginia faced profound marginalization in their homelands, including a federal government that refused to recognize their existence as Indigenous peoples. That was still the case when the replica statue was installed at St. George’s in 1957; indeed, the struggle for federal recognition continued into the twenty-first century.

The stories that have gathered in Gravesend, meanwhile, have all too often been not about Pocahontas or the Powhatan at all, but rather about white British and American aspirations regarding ancestry, empire, and faith. We can especially see this if we go inside St. George’s, where American genealogies from Virginia’s founding families who claim Pocahontas as an ancestor and Jamestown as a colonial “origin story” hang on the walls. Meanwhile, the young Powhatan woman’s conversion to Christianity—which may have been coerced—is portrayed as a powerful testament to the “civilizing” mission at the heart of colonialism. These expressions of imperial desire tell us very little about Matoaka or the Powhatan, but they do tell us much about how the past is put to use in the present, and they do tell us a great deal about white people: about settlers’ longing to belong in the lands their ancestors colonized, and about the need to justify empire as bringing the “good news” to “benighted” peoples.

Indigenous people and peoples have their own ideas about these histories. In 2006, for example, a delegation of Native Americans from the various tribes of Virginia–most of them descended from the Powhatan—visited St. George’s and held a powwow for the Kentish public as a way to commemorate Pocahontas and to raise awareness about the ongoing social, political, and cultural issues faced by their communities. In doing so, they made connections between the seventeenth and twenty-first centuries, perhaps most significantly by insisting on their peoples’ continued existence into the present, something that popular Pocahontas lore rarely acknowledges. Perhaps the ultimate disposition of the replica statue should be their decision.

Surely, the life of Matoaka remains a contested subject. Descendant communities, historians and other scholars, and the general public will continue to wrestle with the significance of her life and the events her presence in England helped set in motion. And just as statues of Robert E. Lee or Cecil Rhodes can serve as anchors for complex, difficult, and robust conversations about how the past and the present are entangled with each other, so might the statue in Gravesend be an opportunity for long-deferred conversations about colonialism, Indigeneity, and whiteness.