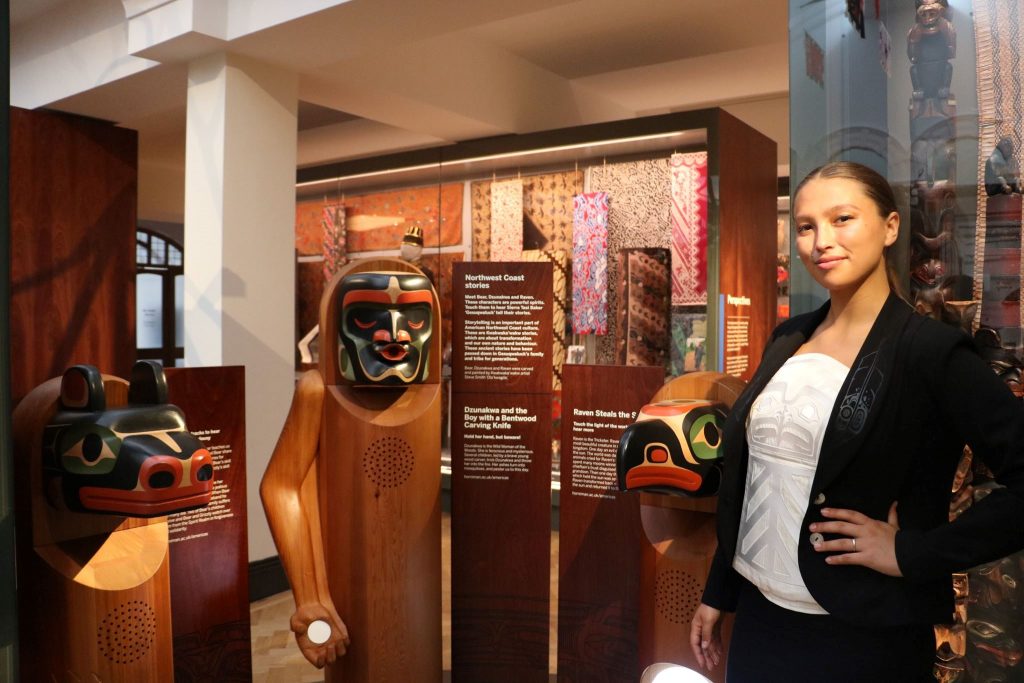 “This [interactive storytelling exhibit] is a really good precedent, for how I think museums should be showcasing our culture. The entire process itself was really respectful of protocol . . . I really appreciate how that was done, very nuanced, and very well understood . . . I think it’s a better way of showing our culture than a mask behind glass, and it shows that our culture is living, that it is a living culture.”

I am Jack Davy, who has written here before about the Hunt for White Cloud, the Native American search of ancestors in museums, and the problems with “Indian Kayfabe” in the archive. Before I came to work for the ‘Beyond the Spectacle’ project I was a curator for the Horniman Museum in South London. The Horniman has recently redesigned its main ethnography galleries, named the World Gallery, which presents some of that museum’s large collections from around the world in a geographic and thematic display containing several thousand objects.

Amongst these displays are large cases containing collections from the Plains Peoples, the Arctic and the Northwest Coast regions, collections largely assembled in the late nineteenth century when the Indigenous peoples of all three regions were going through a period of dramatic transition under intense colonial oppression.

The Horniman’s intentions with these displays was to provide a semi-permanent educational space in London for these collections and the cultures from which they come to be available for visitors, students and researchers. This space allows for an examination of the stories encapsulated in these objects and displays, but like any museum in the UK they do so somewhat mutely, divorced from their original context.

The challenge therefore was to bring living Indigenous voices into this space which would be simultaneously attractive and entertaining for the hundreds of thousands of school visitors who attend each year while still being a meaningful intervention which speaks to contemporary Native stories. It was needed to show British visitors that Native people are still living, that the objects in the cases are not the relics of a gone culture, but part of one that is still thriving.

The solution was to commission a carver of the Kwakwaka’wakw people of British Columbia, named Steve Smith, to carve three cedar masks featuring three characters from Kwakwaka’wakw traditional oral history, the Bear, the Raven and the Dzunukw’a, a wild woman of the deep forest. The masks were mounted on cedar pillars, and when pressure points are activated, the masks tell stories of the characters mounted upon them. Those stories were told by Sierra Tasi Baker, Kwakwaka’wakw graphic artist, performance artist, architect and activist, who recorded them in the summer of 2017.

In June 2018 the galleries were opening, and ‘Beyond the Spectacle’ realised that there was no planned Native American presence at the opening of the World Gallery, despite the participation of these Kwakwaka’wakw artists in the interactive design. Working in collaboration with Sierra and the Horniman, we prepared a funding application with the Canada Council, who provide grants to Indigenous artists for travel and public engagement outside Canada.

This grant contributed enough to enable Sierra to visit Britain for a month, during which she was able to speak publicly at the opening of the Galleries, following Mary Beard on stage, and giving her the opportunity to publicly acknowledge the problematic history and more promising collaborative future of the relationship between UK museums and Indigenous peoples.

During her visit Sierra was also able to visit other museums in the UK, to engage with heritage institutions and leaders and to explore her own family’s history as it appears in the UK museum record. She also gave two interviews to ‘Beyond the Spectacle’ in which she explored her relationship with Britain and Britain’s complicated historical relationship with indigeneity. In the final report she submitted to the Canada Council in the aftermath of the visit she wrote about what the opportunity to engage with UK heritage institutions meant to her as an Indigenous artist and activist.

“With the grant I was able to travel to the Horniman Museum in London, England, United Kingdom, to open the World Gallery exhibit. I was invited to give the opening speech alongside dignitaries & public figures, including the Minister of Culture. Horniman Museum staff invited me back after the World Gallery opening for various media interviews, speeches, and formal engagement with the British public and schools. These engagements allowed me to change stereotypes, educate the public, and to further reconciliatory narratives.

By opening the World Gallery exhibit and debuting the interactive oral storytelling installation I was able to move into a leadership role in reclaiming indigenous narratives in historically colonial museum spaces. With my speech I was able to bring an authentic voice to the event and speak with many dignitaries and heritage sector professionals on the importance of strengthening indigenous relations and appropriately showcasing our stories in museums.

By interacting with these several museums, galleries, libraries and universities I was able to create an ongoing dialogue in academia, museum curation, and with the British public. These conversations have led to more project ideas and future collaborations in museum curation around indigenous ways of knowing and reclaiming our narratives in a positive and historically authentic way.”

Sierra here articulates the personal and professional benefits that can accrue to Native Americans who are able to participate in the kind of cultural exchange that ‘Beyond the Spectacle’ seeks to promote and facilitate, but she also hints at the enormous benefits which UK institutions can receive from engaging with knowledgeable and dedicated artist-activists like Sierra. Through Indigenous voices and interventions, new stories can reach the British public in new ways, and historic collections can, at last, start to be more effectively contextualised and relevant to modern audiences, teaching visitors about cultures as living and vibrant rather than preserved, catalogued and consequently obscured.

As Sierra explains in the quote which opened this blog post, her collaborative work in the Horniman is intended to contribute to a sea-change in the ways in which UK museums engage with and represent Indigenous peoples in the museum displays. She views this as a form of communal healing which can make a small step towards addressing the legacies of colonialism in the museum space, and pushes researchers, including our own ‘Beyond the Spectacle’ team, to understand the roles that we play in this process of reconciliation.

In the effort to bring Sierra to Britain this summer, ‘Beyond the Spectacle’ would like to acknowledge the financial support of the Canada Council, and partnerships with the Horniman Museum, Dennison Smith and the Baldwin Gallery, Border Crossings and the Sainsbury’s Centre for Visual Arts.

‘Beyond the Spectacle’s relationship with Sierra is one of a number of exchanges and projects in which we are partnering with Native North American people and groups, all of which will be reported and discussed at length on this blog. If you are a Native American interested in participating in a cultural exchange, please do let us know so that we can discuss collaborative opportunities.