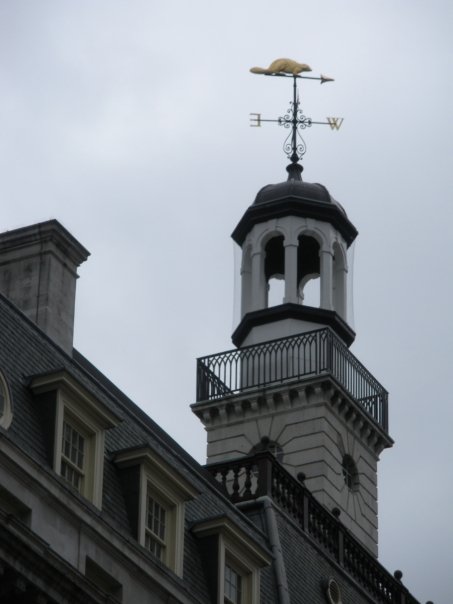 Bishopsgate is a busy if somewhat nondescript thoroughfare in the City of London. It follows the line of the ancient Roman wall around Londinium; indeed, “Bishopsgate” is a reference to just that: one of the several gates that pierced the defensive walls, channeling traffic and trade into and back out of the city. The wall is long gone; now, workers pass up and down the pavements, and black cabs and other cars buzz north and south along the road where the wall once stood.

We sometimes forget to look up. But if we do while walking in Bishopsgate, we might notice something unusual. There, atop one of the buildings, rises a weathervane. It is gilded – or at least golden in colour – and features, of all things, a beaver. It is an odd choice; wild beavers in Britain have been extinct since the sixteenth century[2]. But it faces west, and this is a clue: this is a North American beaver, and it refers to a business that once stood here. Bishopsgate was once home to an office of the Hudson’s Bay Company, a central player in the transatlantic fur trade and one of the most important institutions in the rise of both capitalism and modernity.

The presence of a North American beaver in Bishopsgate prompts us to reconsider the stories we think we know, and in particular, our ways of talking about empire and the so-called cores and peripheries that constitute it. Usually, historians and others portray London as the centre of empire, and no doubt, the city emanated power and policy in ways that dramatically reshaped the face of the planet. In this reckoning, the lands that were sources of the Hudson’s Bay Company’s stock of beaver and other pelts – territories belonging to peoples and nations such as the Haudenosaunee, the Anishinaabe, the Métis, the Cree, and the Dene, among others – are the periphery in a global trade that fueled and reflection the fashions of several centuries.

But what if we were to invert that story of core and periphery? What if we were, for example, to take the beaver top hats of the nineteenth century, and disassemble them? We might imagine them returned to their pelt form, and from there, returning across the Atlantic, travelling up the St. Lawrence River and into the Great Lakes and beyond. We might envision them reanimating along the waterways of Indigenous territories across Canada, where Indigenous knowledge and labour – especially that of women – made the fur trade a reality in the first place. In this reckoning, London is not the centre of anything; rather, it is at the periphery of Indigenous centres, at the edge of Native geographies. Indeed, those lands – through the migration of labour and capital – made the very building commemorated by the Bishopsgate beaver weathervane possible. Like the sugar plantations that built wealth in London, Liverpool, and beyond, the hunting grounds of Indigenous people also helped make modern Britain.

This sort of reading of a British place such as Bishopsgate engages in what Maori scholar Linda Tuhiwai Smith calls “Indigenizing,” that is, a “centering of the landscapes, images, languages, themes, metaphors and stories in the Indigenous world.” It is also an attempt to engage in another kind of decolonizing work: rereading. “The genealogy of colonialism,” Smith goes on to say in her foundational work Decolonizing Methodologies, “is being mapped and used as a way to locate a different sort of origin story, the origins of the imperial visions, the origins of the imperial policies and practices, the origins of ideas and values. These origin stories are deconstructed accounts of the West.”[3] Smith’s powerful and influential call to scholarly action informs the work of ‘Beyond the Spectacle’, which attempts to challenge the notion that London is the only centre from which history moves.

More than simply “flipping the script,” however, ‘Beyond the Spectacle’ seeks to entangle British and Indigenous North American histories, showing the ways – often ironic – that Native people engaged with the imperial expectations of what it meant or means to be Indigenous while also pursuing their own agendas, whether personal or political or both. Just as the Hudson’s Bay Company, for all its imperial ambitions, was entangled in Indigenous ways of knowing and being and working, Britain has been caught up in Native North American practices, processes, and projections. Indeed, terms like “core” and “periphery,” “colony” and “metropole,” begin to fray once we actually engage the lived experiences of Indigenous travelers to, and residents of, Britain.

In his important work Facing East from Indian Country, historian Daniel Richter encourages us to literally change our perspective on North American Indigenous history. He suggests that by assuming Indigenous territories to be the centre of the story rather than the periphery, and by assuming that Indigenous North Americans were more than passive recipients of empire, we can dramatically reorient our understanding of the past and, perhaps, even our shared places within it.

At least when I snapped its photo, the golden beaver was facing west. While only a small artifact within a vast urban landscape, and one that no doubt also points north, east, and south at times, the weathervane in Bishopsgate can serve as a reminder of the ways in which the history of the British Empire can move in many directions at once. A shopper in London purchases a top hat; a stevedore in Montreal lifts a load of furs onto a ship; a factor in Rupert’s Land makes a mark in a ledger; a Cree woman scrapes a skin. All are connected; all are centres; all are also peripheries. And, as ‘Beyond the Spectacle’ hopes to show, with Indigenous individuals and communities and nations continuing to lay claims upon Britain and its spaces long past the end of the fur trade, these stories are far from over.

[2] Beavers have now been reintroduced on a trial basis in Scotland and Devon – http://www.bbc.com/earth/story/20161005-beavers-are-back-in-the-uk-and-they-will-reshape-the-land