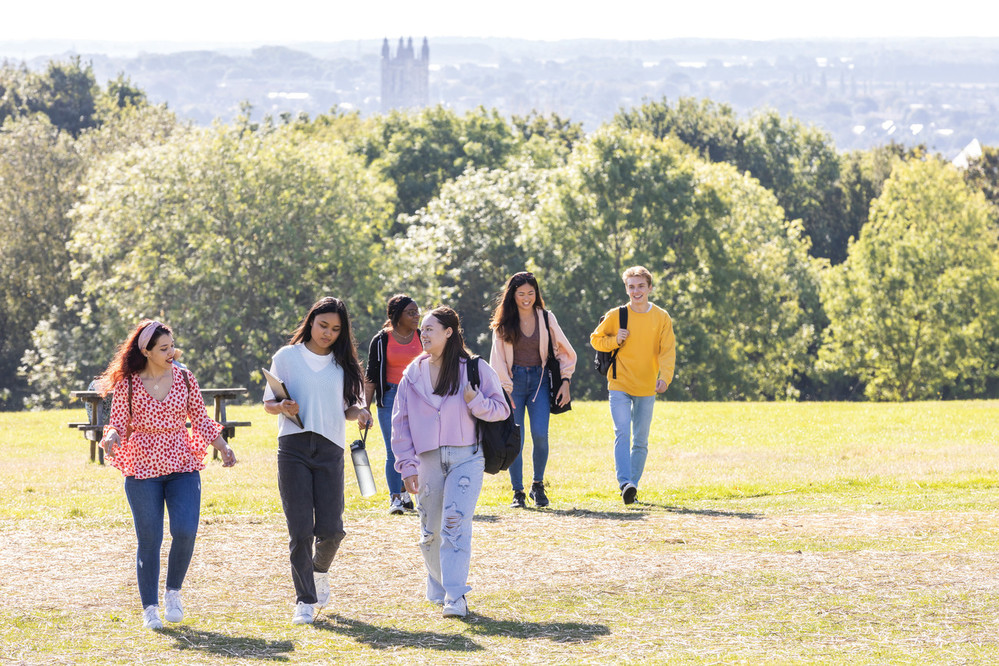 Tell us a bit about your weekly life on campus including

As a third year Film student who is mostly interested in the theorical side of studying film, my average week looks like this. In the first half of the week, I have a lecture that lasts about an hour. After the lecture, we take a brief break and then we begin our weekly screening for this module. At Kent, most of my modules are run this way – an hour lecture followed by a screening of a film which will be the main case study for the week. After the screening, I return to my room and polish up my notes and write a couple of pointers on the film we have just been showed. In the second half of the week, I do some reading in preparation for the seminar ensuring I take notes during this. In some weeks, I find the topic quite interesting and will email my lecturer or speak to them during their office hours asking for further readings or academics who might have written in this topic. At the end of the week, I partake in the seminar, which is ran in smaller groups than the lecture, allowing for everyone to feel welcome in participating in discussing the material for this week. Normally, you would discuss items that were brought up in the lecture and reading and applying them to the film screened this week.

How many contact hours are on your course? Is this easy to manage and balance with your social and work life?

There is a healthy amount of contact hours that doesn’t feel overbearing. It perfectly suits my lifestyle, I have an even number of hours to study and enjoy my degree, while also enjoying the social aspect of university!

How many different modules do you cover over the week?

As I decided to work on an independent project instead of doing a taught module, I technically only have one module this term and the other is ran by my own research for my dissertation. However, normally I would have two modules every week – meaning I would have two lectures, two screenings and two seminars as part of my regular schedule. The best part about studying Film at Kent is that one can really tailor their degree to their needs: if you are interested in studying theory, you can really choose which areas to specialise and explore further. When I had to choose my modules for second and third year, I went looking for modules that suited what I found the most interesting in first year.

How much do you travel to get onto campus?

I live on campus! It normally takes me about ten to fifteen minutes to get to my classes.

Have you stayed in campus accommodation?

In first year, I lived in Turing College. This accommodation is only for first years, meaning that everyone who you will be living with will be in the same situation as you – completely new to university life. I really enjoyed my entire at Turing, mainly because of how great and chill my flatmates were. I was very lucky to have a room with a view of Canterbury from the hill which was a beautiful sight to wake up to every day. This accommodation is also right next to the main bus station, which makes it handy when needing to pop down into the city centre.

In third year, I lived in Tyler Court. Once again, I really can’t complain about living here. It’s right on the main campus, meaning I can go to the library (which is open 24/7 during term time) whenever I need to without worrying about having to walk long. It’s great as a Film student because it means I can pop into the library, grab a DVD for the night, watch it and return it all in the same day. It’s also close to one of the paths one can take between campus and city centre, so it’s useful whenever I feel like walking down to Canterbury.

What is the social scene like in Canterbury on and off campus?

The social here in Canterbury is fantastic because there really is something for everyone. If you want to go out with friends, you can cater your experience to the mood you are in. If you feel like going out for the evening, there is The Venue, our local club right on campus, as well as several other clubs in Canterbury. If you feel like going out for a couple of drinks, but not exactly going out to the clubs, there are plenty of lovely independent pubs across Canterbury. My personal favourite is The Monument, it’s become a spot where I go out with my friends after class every so often, normally after we hand in our assignments. If drinking isn’t exactly your thing, me and my friends often pop down to Mooboo, which is a cute bubble tea shop next to the cathedral. As a Film student, I fill a lot of my time heading to the cinema. During the weekend, I tend to go to either The Gulbenkian, our local cinema here on campus or Curzon down in the city centre. No matter the day or the mood you’re in, there’s something here for you in Canterbury.

Have you been on any trips within Kent and London since studying with us?

Traveling to and from London to Canterbury is incredibly easy. There is a fast train between both cities that really makes the whole journey as convenient as possible. When I lived in London during first year, I could pop by to visit my family once a month and it never felt like they were far. It was also great for trips with friends from university.

Are you involved with any student societies?

I participate in many student societies! They are a great way to meet new people interested in the same things as you. I’m part of the LGBTQ+ Society here at Kent, who hold both drinking and non-drinking social events. Some of their events include pub crawls with drag queens, board game nights and movie nights! I’m also part of the Film Society here at Kent, they screen two movies a week and after the film, we all head over to a bar on campus to discuss the film. I’m also part of the K-Pop Dance Society, which does what it says on the tin – anyone of any dance level can join and learn the choreography to a K-Pop track. They also hold social events, such as K-Pop Club nights around Canterbury.

Do you work alongside your studies?

Yes! I work over at a concert venue in London at least once a month these days, depending on role availability. It suits my schedule since I only work during the evenings, and I can get back to Canterbury before the last train.

What would be your main advice to prospective students looking to join the community here at Kent?

Come here willing to try out new things! For many, leaving home and heading to university is already a big step so why not take advantage of that first step to continue trying out new and exciting things.