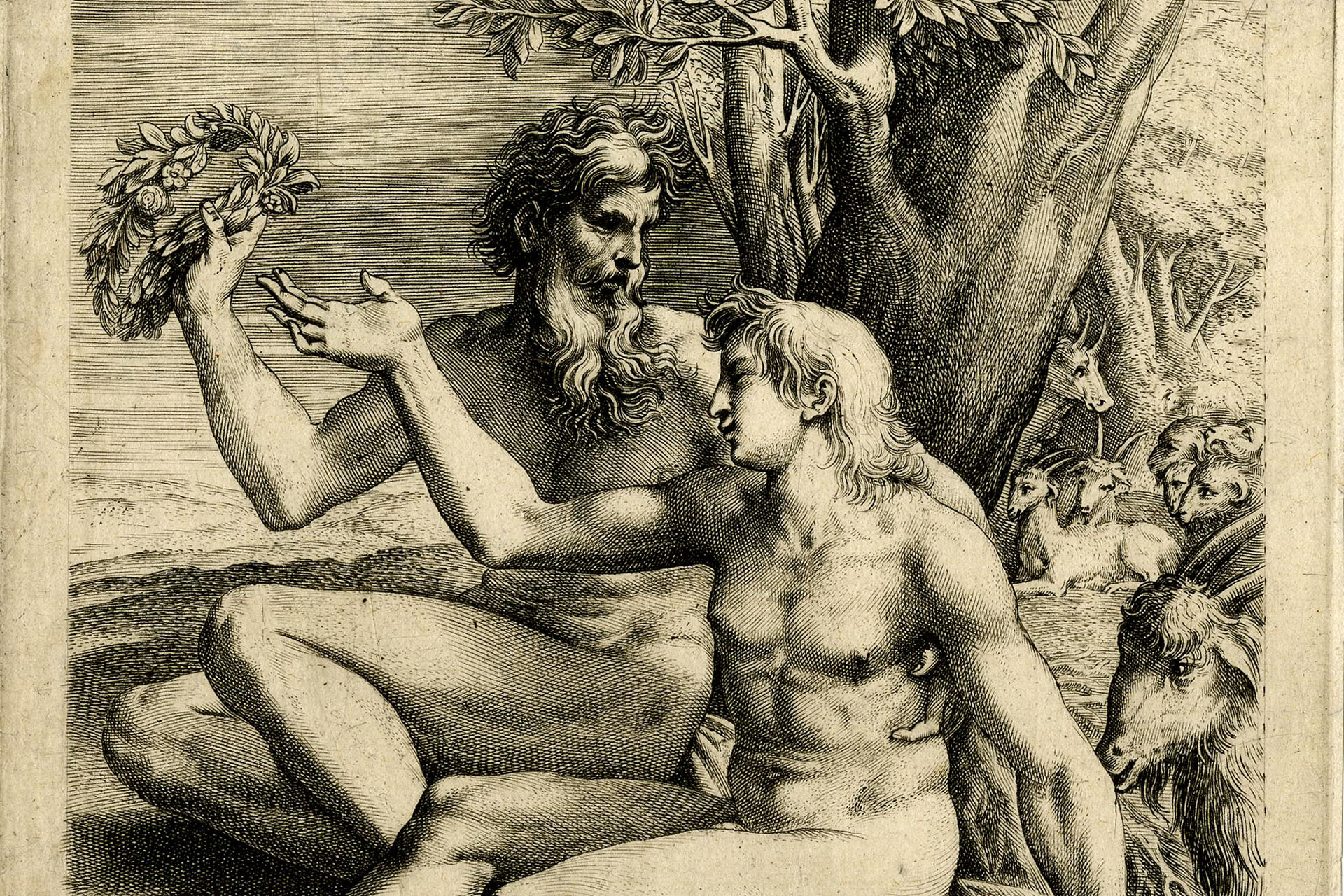 This engraving of a pastoral scene reproduces in reverse a carefully finished pen and ink drawing by the Emilian artist Francesco Parmigianino from c.1530-39 now in the Kunsthalle in Hamburg (no. 21267). The drawing has a provenance to the collection of Thomas Howard, Earl of Arundel, and it was presumably while he was working for that great patron of the arts in London from 1623-28 that Lucas Vorsterman engraved it, along with other works in the Arundel Collection.[1] The print carries an inscription dedicating it to Jacob Roland, and a Latin verse, whose source has not been identified, which suggests that the older of the two men in the image is inspiring the younger by his blandishments to earn the garland of honour through the melody of his reed pipes (‘Exstimulat senior blandae ad modulamina cannae; Accendit iuvenem dulce, Corona, decus’). In this context, Parmigianino’s stylish design served as an index of the Italianate and antique tastes of a leading figure in Caroline court culture.

The meaning of the original drawing, however, seems to be obviously homoerotic. As David Franklin has put it: ‘The main lines of the narrative seem clear, even in the absence of a precise identification of the subject. The mortal youth who holds a flute in his right hand receives from the bearded god an offer of immortality in the form of a laurel wreath, which he reaches to take in return for sexual favours’.[2] Whether the two nude men, one bearded and mature, the other a youth, are a god and a mortal, or simply two goatherds, their encounter is subtly sexual with the prized wreath – held out of reach by the older man – being connected through complementary gestures with the phallic pipes held caressingly by the youth. The mood of the scene resembles the yearning eroticism of the pastoral poetry of Virgil’s Eclogues – for example, Corydon’s love for Alexis in the second Eclogue – or of the Idylls of Theocritus. Same sex love was a frequent topic in the poetry and mythology of antiquity: a natural part of a metamorphic universe in which the transformative power of desire prevailed (‘Omnia vincit Amor’). The gods and heroes of antiquity took both male and female lovers, for example, Apollo loved both Hyacinth and Daphne, among many others, while Hercules had both Omphale and Hylas as sexual partners. That Parmigianino’s design represented homosexual love has been ‘overlooked’ previously, and the print has even been catalogued as Adam and Eve or a Faun with a Nymph.[3] Similarly, the eroticism of Parmigianino’s drawings has often been censored by collectors, particularly in order to remove the signs of male arousal (e.g. the doctored drawing of Priapus and Lotis in the British Museum where the unfortunate god’s defining characteristic has been carefully removed). At least one other drawing by Parmigianino depicts homosexual desire: a pen and ink drawing in the Louvre of two headless nude men where one is stroking the other’s erect penis.[4] David Ekserdjian has shown that the artist’s drawings provide evidence of Parmigianino’s awareness of the notorious I Modi prints engraved by Marcantonio Raimondi after Giulio Romano’s designs, which may account for his wariness about publishing such designs as prints given the punishment meted out by the church authorities to Marcantonio the printmaker.[5]

Social attitudes towards homosexual desire appear to have been relatively accepting in Renaissance Italy, although manuals for confessors continued to define sodomy as ‘the gravest of all sexual sins because it violates nature and denies procreation’ and there were periodic campaigns of juridical enforcement against sexual acts that could theoretically carry the death penalty.[6] It was wise therefore to overlay the expression of homosexual desire with allegorical, philosophical or poetic allusions – as Michelangelo did in addressing poems and drawings to his beloved Tommaso de’ Cavalieri.[7] When the sculptor Baccio Bandinelli accused the goldsmith Benvenuto Cellini of being a ‘soddomitaccio’ in front of Florence’s Duke Cosimo in a violent argument over the aesthetic merits of an antique statue of Ganymede, Cellini defused the shock of this accusation by referring to mythology: ‘Yet would to God that I understood so noble an art as you allude to; they say that Jove used it with Ganymede in paradise…’[8] Cellini recalled the shouts of laughter provoked by his witticism from the Duke and his courtiers during a period of four years of house arrest following a conviction for sodomy in 1556 during which he began to write his autobiography.